Have You Seen This Lately?

Have you seen a lot of red ribbons lately?  Been accosted at the grocery store to donate to heart disease?  Or perhaps you’ve received 500 unsolicited address labels asking for an in-kind contribution?  Nope.  Neither have I.  You would be hard pressed to know that February is National Heart Month.  Contrast this with the month of October – National Breast Cancer Awareness month.  Every billboard, key chain and toilet seat has a pink ribbon on it.  I’ve written previously about the “pimping of the pink” (https://fromabirdseyeview.com/?p=5582).  My problem isn’t with the much-needed research on breast cancer.  After all, I have some very close friends that are alive today because of the advances made in breast cancer treatments.  My issue is with the ubiquitous pink ribbon that corporations and individuals use to solicit money when, in fact, very little of the money collected actually goes to research.  And in the mean time, money that could be used to fund research for other medical diseases gets squandered.

In fact, heart disease (heart attacks and stroke) kills more women than breast cancer.  According to an article in Harvard Health Publishing, in a survey conducted by the American Heart Association, about half of the women interviewed knew that heart disease is the leading cause of death in women, yet only 13% said it was their greatest personal health risk. If not heart disease, then what? Other survey data suggest that on a day-to-day basis, women still worry more about getting breast cancer — even though heart disease kills six times as many women every year. Why the disconnect?

The survey answers may have been influenced by who and when women are afflicted with these diseases.  In the survey researchers found that breast cancer affects body image, sexuality, and self-esteem in ways that a diagnosis of heart disease does not. Also, heart disease tends to show up at an older age (on average, a woman’s first heart attack occurs at age 70), so the threat may not seem all that real to younger women. Most 50-year-old women know women their age who’ve had breast cancer but none who’ve had heart disease.  In fact, the latest report from the CDC indicates that cancer is the leading cause of death in women under the age of 65.  After that, heart disease kills more women than cancer by far. 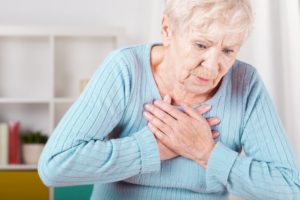 So, perhaps there is also an “ageist” aspect to all this.  After all, no one who dies while receiving a Social Security check is classified as an unexpected death.  Sure, 70 is the new 50 but I’m not sure on average our bodies are aware of this new social phenomenon.  So older women face two hurdles: age and sex.  The American Heart Association survey also found that many women say their physicians never talk to them about coronary risk and sometimes don’t even recognize the symptoms, mistaking them instead for signs of panic disorder, stress, and hypochondria.   According to that same Harvard article,  a woman’s symptoms are often different from a man’s, and she’s much more likely than a man to die within a year of having a heart attack. Women also don’t seem to fare as well as men do after taking clot-busting drugs or undergoing certain heart-related medical procedures. Research is only now beginning to uncover the biological, medical, and social bases of these and other differences.

The American Heart Association came up with the February awareness initiative to bring some light to all of these issues.  And specifically, they have targeted women with the Go Red For Women campaign.  Their website provides lots of interesting facts and resources – it’s well worth your time to become familiar with it.  Unfortunately, whoever came up with the website name didn’t think things through because it reads “goredforwomen.com”  which, when read quickly, can also read Gored For Women.  Perhaps the AHA needs to hire the marketing geniuses that launched all those pink ribbons.