Bob, me and brother Jack

My brothers and I have been fortunate in many ways, not the least is we have never harbored any jealousy of one another.  We have always supported one another’s accomplishments and offered support during rough patches.  But I have to admit, I have always been a bit envious of their beautiful hair.  Both of my brothers have shiny, thick, silver hair that requires little effort and provides them with a distinguished look.  On the other hand, I’ve been covering up my grey hair every 5-6 weeks since my late-30’s.  I discovered that I’m not unusual: 75% of women in the U.S. color their hair.

Part of the reason so many women choose to cover the gray is due to our cultural bias that gray hair is aging.  While studies show that men are perceived as more distinguished with gray hair (it is called the “George Clooney effect), women with gray hair are perceived to be old, dowdy and uncaring about their looks.  There is even a phrase for women who let their hair go gray:  Gray hair, don’t care.  I’m calling baloney on that.  Maybe we’re just tired of all the upkeep and expense.  I hate to think about the money I’ve spent on hair color over the years.  I’ve ranged from golden blonde to light brown to auburn but regardless of color, I’ve been a slave to the gray.

But something changed earlier this year; I began to re-think coloring my hair.  After all, I’m 70 – who am I trying to kid by not having a gray hair on my head?  One would only need to look at my crepey arms or wrinkled neck to know that I’m way past the point of being carded at the liquor store.  During the 2020 lockdown it was all the rage to transition to gray hair because the salons were closed.  Of course I didn’t do it then, when I wasn’t going anywhere or seeing anyone.  That would have made too much sense.  Instead, I donned my hazmat suit and kept every salon appointment all year long.  But earlier this year I decided enough was enough and vowed to join my brothers in the Sparrow silver hair.   I had silver-blonde streaks put in to help with the transition.  I have a visions of looking like this: 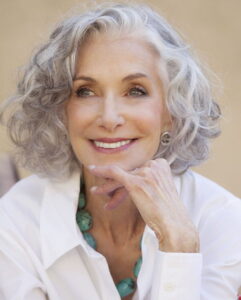 But I will probably end up looking like this: 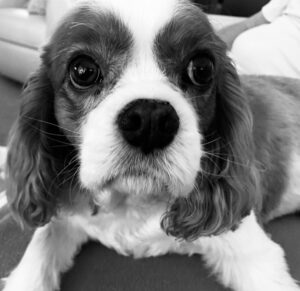 Turns out that I have very slow-growing hair.  It sure didn’t seem that way when I was traipsing to the salon every six weeks.  It will probably take the better part of a year for the silver to grow all the way out.  Oh well, I’m almost past the point of caring.  The gray hair I worry about these days is on Dash the Wonder Dog.  When I look at his sweet face I see all the gray hair around his eyes.  It’s a horrible reminder that he is getting older and won’t always be with me.  Now THAT is gray hair to worry about.  So I’m going to spend my time thinking less about what color my hair is and more time sitting next to my best pal, who loves me no matter what color is on top of my head.  We’ve made a pact that we’re going gray together.