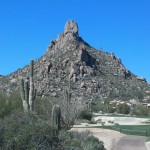 Like many people who live close to a landmark, I am completely clueless about the one near me, Pinnacle Peak. Which is particularly pathetic because I’ve lived at the base of it for 15 years. It serves as a beacon of sorts, providing a touchstone to remind us of just how far away we are from home when we travel around the Valley of the Sun. So, let’s just say hypothetically that one of us is lost and the other won’t ask for directions, we just look for “the Peak” and, voila!, we know which direction is home.

Normally the most attention I pay to it is when I’m playing golf and spot some adroit rock climbers who have scaled its summit. Usually they will wave to us golfers. We always wave back, admiring their gumption – and youth. I usually three-putt those greens due to the obvious distraction. Or at least that’s my story this month.

But curiosity got the best of me last week and I decided to do some research on the Peak in my backyard. The first thing that struck me is that the Peak is almost 3200 feet high. That’s the tip, where all those crazy rock climbers look down on all us crazy golfers. That may not seem high to those of you who live in the mountains, but to those of us in the desert, this is our Mount Whitney.

The area around Pinnacle Peak was originally used by the Hohokam Indians for hunting and food gathering. Later, settlers began to use the area for ranching and mining, and finally, the whole darn place was overrun by golf courses and homes. One vestige of the mining era is that the best cheeseburger in the world can be found Greaswood Flats, an old miners shack right across from the Peak. 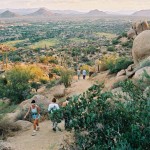 In 1994 the city of Scottsdale decided to make Pinnacle Peak a park and built a trail so that everyone could enjoy its beauty. The trail is 3.5 miles roundtrip and will leave you begging for an iron lung on the way up. They conveniently have provided a bench at “Grandview”which they say is so you can sit and admire the the spectacular vista. Usually all I see are my shoelaces, since my head is buried between my knees in an effort to regain regular respiration – and some dignity. The trail only climbs 500 feet from the trailhead to the top, but the older I get the steeper it becomes. I see some young people run the entire trail which I think is highly suspicious and may require some drug testing.

If gasping for air isn’t enough to entice you, you might be attracted to the beautiful plants and animals that inhabit the area. You’re likely to see bobcats, Gila monsters and Diamondbacks – and not the ones with a bat in their hands. But if you do see them you don’t want to run too far off the trail or you might get stuck in a jumping cholla plant, a vicious cactus that does actually jump out and stab you with it’s fishhook spines.

I have promised myself that I will hike the trail more regularly this spring in the fervent hope that I will get in better shape. And, seriously, there is nothing more beautiful than the cactus flowers in the spring. If nothing else, I have found a practical use for the stopping point at “Grandview” – it is the perfect place from which to throw my golf clubs off into a deep, dark crevice, never to annoy me again.

Last week we spent some time in Mammoth Lakes, as we have done most summers since the mid-80’s. We used to hike and enjoy the scenery, but then we started playing golf and such pursuits were given up for the joys of hacking our way around the local courses. In retrospect, and in assessing my golf game, I should have stuck with hiking.

My favorite hike in Mammoth is the one up to TJ Lake. It is a magnificent mountain lake, surrounded on all sides by rugged peaks and tall pine trees. And because of its remoteness, it is quiet and undisturbed – one of the last remaining places on Earth without a Starbucks. One of my fondest memories is of the last hike we took up to TJ in 1986 when I spent an afternoon reading “Gone With The Wind” by its shores. It remains one of the top 10 days of my life. Every year since then I have suggested to my husband that we do that hike again but we never have. Until last Wednesday.

We also noted numerous signs warning of the bears in the area. But my husband patted his side and confidently assured me that he had his hunting knife strapped to his belt. Every wife knows this moment: do you let your right brain take over and humor him or does your left brain shout “Are you nuts? You will be through that bear’s lower intestine before you even have the knife unsheathed!”. But, like wives everywhere, I weigh 25 years of marriage versus pointing out the ridiculousness of his plan and say nothing.

We set out, channeling our best Scouting tactics. Slow pace, traversing back and forth, stopping to rest. There was a lot of stopping to rest. But we forged on up the mountain, crossing a river using rocks for a path, hurdling a dead tree trunk, we were regular John Muir trekkers. At last we came to Lake Barrett. It is crystal blue, surrounded by pines and jagged mountains. I posted a picture of it on my Facebook page and got lots of “oohs and ahhs”. That would be enough for most people. But I wanted to see TJ. I was sure it was just over the next hill.

It actually was over the next hill, but I had forgotten that TJ is lower than Barrett. So down we went, knowing that with every step down we were going to have to make our way back up. But I was on a mission. And finally, there it was! You know how you go back to something many years later and the object you’ve tracked down is either smaller or less grand than you remembered (or in the case of my high school boyfriend, a lot shorter)? TJ was everything I remembered and more. I’ve attached a picture but it doesn’t do the lake justice. I sat there for a long while, taking it all in. And I have to admit that I got choked up a bit when I turned to leave. I don’t know why exactly, maybe just happy that I’d managed to make the hike again or maybe because I know that making a return trip with my creaky knees and arthritic back might not be possible.

As we got back down to George there was a couple standing at the fork of the trails. “Hey, folks!”, they shouted. I though they had obviously identified us as fellow members of the hiking community. But they went on…”Did you happen to see the big bear that just went through here? We don’t know which fork to take to avoid her.” I just about passed out, but my husband tapped his knife like a regular Daniel Boone, confident that he had the situation under control. I immediately went down to have my golf clubs re-gripped.

And now for the Tom Cruise part.  Turns out that he flew to Mammoth Lakes the same day we arrived to film the last scenes for his new film, “Oblivion”.  According to our waitress at the chop house (and really, who is more of an authority on local gossip than a waitress?) he stayed at the Westin next door to us and was served with more papers from Katie while he was there. Too bad we never met up with him.  I could have told him that the best place to avoid problems was up at TJ.  A New York attorney would never risk dirtying his tassel loafers climbing up that trail. 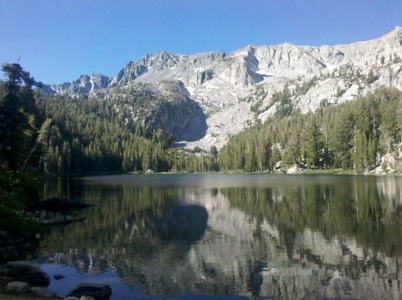