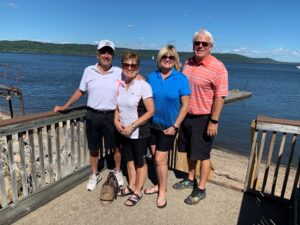 Donnie, Starlet, Linda and Old Man on the river

I had the occasion last month to visit Minnesota, home to Paul Bunyan, the Vikings and Linda’s mother, Phyllis; sister, Starlet; brother-in-law, Donnie and various nieces, as well as some great-nieces and nephews – their greatness varies, but mostly they’re great.  Some of our friends doubted our sanity in 1) flying anywhere during Covid, and 2) going to the state that was ground zero for all the national riots.  How some ever, we’ve become callus to comments about our sanity – they seem to come with predictable regularity.  So off we went.

While we did fly into the eye of the storm (Minneapolis), we were quickly picked up by Donnie & Starlet and whisked 85 miles south to Rochester, home to the Mayo Clinic.  So, if Minneapolis is ground zero, Rochester would be ground one million, what with all the highly qualified doctors, state-of-the-art medical facilities and all those ‘Minnesota nice’ folks.

I won’t bore you with all the darn tootin’ card games we played or with Gene & Denise Cobb’s bucolic, five-acre vegetable and flower garden (featuring the finest salsify in the land), but what I will bore you with is a side trip we took to the Mississippi River.  Yes, for those who are geographically challenged, the ‘Mighty Mississippi’ starts in Minnesota, from a glacial lake that’s only about 2 square miles, Lake Itasca, to be exact. 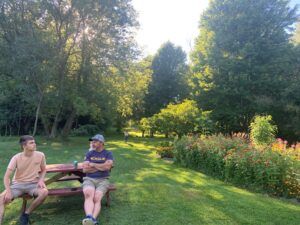 Will and Gene in Cobb backyard 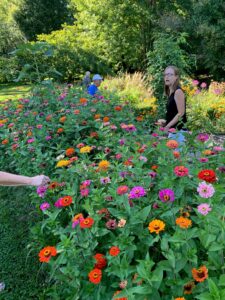 We drive to Lake Pepin on the Mississippi; yes, the Mississippi has lakes, and Pepin is the largest one. On the east side of the lake or river is Pepin, Wisconsin, on the west side is Lake City, Minnesota, where we stop to have lunch, and learn that:

As ‘Old Man River’ and the ‘The Adventures of Huckleberry Finn’ echoed in my brain, I wondered what else I didn’t know about what most people mistakenly think is America’s longest river.  That’s right, that honor goes to the Missouri River, which is about 100 miles longer and originates in Montana and empties into the Mississippi in St. Louis, where they jointly ease their way to New Orleans then into the Gulf of Mexico.

I was interested in what Google had to say about the river; not surprisingly, quite a bit.  Here’s a few gems (OK, maybe not gems, but possibly of some esoteric interest):

We leave the river and stop at a winery and get a better understanding of why Minnesota is known for a lot of good things, but not it’s wine.  We head directly to The Little Thistle Brewing Company, a local craft brewery, where Gene Cobb is an investor, and get the taste of wine out of our mouths with some great craft beer.

All is still NICE in Minnesota (except the wine), and it’s somehow reassuring to know that during these crazy times Old Man River just keeps rollin’ along.