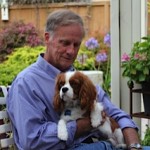 Alan with his perfect present

Today is my husband’s birthday.  Which means that for the past several weeks I have been struggling to figure out an appropriate gift for him.  Some years he goes out and buys himself a whole set of golf clubs and then tells me that’s my gift.  But I’m old-fashioned when it comes to gifts.  I think it matters that someone puts thought into finding the perfect present.  Of course, Alan and my definitions of the “perfect” gift differ a bit.  What he really would like is a Shelby Cobra.  He has been known to make a perfect fool of himself by approaching Cobra drivers in parking lots with drool slithering down his chin.  He also would like to have a date with Kate Upton.  He hasn’t seen her in person but I’m sure he’d be drooling over her too.  The chances of him getting a date with her is about the same as me buying him a Cobra.  It’s just not happening.  So I’ve been in my usual quandary about finding him a great birthday surprise.   I was going to send him to golf school up in Sun Valley until he said the other day that he hoped I wasn’t buying him golf lessons because he has miraculously fixed his swing. This is generally what happens every year – I think of something “creative” and it turns out to be the wrong thing at the wrong time.  But I like to have something for him to open on his birthday.  I could rest on my laurels, since bringing Dash the Wonder Dog into our home racked up LOTS of gift points.   But I’ve never been one to pass up the opportunity to have a birthday celebration so I was determined to forge ahead in my quest for a gift. 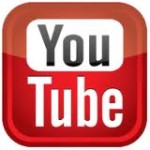 A week ago I was lucky enough to get a good hint as he made his daily trek into our office to watch YouTube videos of Brazilian jazz artists.  He just discovered YouTube about six months ago,even though they’ve been pretty popular with anyone who likes cat videos for the past eight years.  He is constantly going up to friends and saying “Hey, have you heard about this YouTube thing?”.  Sadly, given the age of most of our friends, he sometimes finds people who haven’t.  He has created his own account to bookmark all of his music and, for all I know, videos of Kate Upton.  Luckily, as he was watching Ivan Lins for the 1,000th time last week he said, “Gee, I really wish I could take this music with me when we travel this summer”.  I paused.  How could I explain that he could watch YouTube on the iPad?  Instead, I saw an opportunity and immediately began to research iPods.  The next day I bought him the iPod Touch.  As long as he is coming into the twenty-first century I thought I’d drag him all the way – messaging, FaceTime and all the games he desires.  I was going to unwrap it and download several of his CD’s and favorite songs from the Apple Store, but given my success rate with some of my past bright ideas, I have left it in its original packaging.  Which means for the remainder of the day all I will hear is “Honey, can you come in here to help me download?” or “This *&^($# thing doesn’t work!”.  It’s never easy.  But I will give him this – he has a GREAT attitude about birthdays and aging in general. 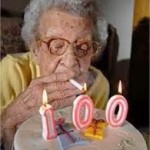 Which is more than I can say for some of our friends.  We know people who either hate to celebrate their birthday or are stressed out about getting older.  Frankly, I think they’re crazy.  First of all, birthdays are the perfect excuse to have a party.   Secondly, and more to the point, getting older is a privilege.  Walk into any pediatric ward at a hospital or talk with a young widow with small children and it becomes very apparent how lucky we are to grow older.  And the old saying is true – if you have your health you have everything.  Complaining about getting old seems a bit selfish or at least  self-centered.  Sure, we have more wrinkles and the bones creak a bit more, but if you’re generally feeling good a birthday should be a mark of accomplishment.  Being as good as we can be at whatever age we’re at is a good goal to have.  Besides, birthdays are the perfect occasion to eat cake and what is better than that?  So Happy Birthday to my dear husband today.  I hope he hears me since I have a feeling he’s going to have ear buds attached to him for the foreseeable future.