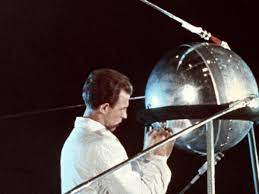 I have been fascinated with space from an early age, and as I have mentioned in previous blogs, my teachers always referred to me as the kid who just took up space in school, but that’s another story.  Most who read our blog are part of the generations who have eye-witnessed the exploration of space first hand.

We remember the Russians, back then it was the U.S.S.R., as the first to explore outer space, as opposed to today’s Russian heart-breaking exploration of Ukrainian space. They opened the ‘space age’ in 1957 with the first satellite to circle the earth, Sputnik, which translated from Russians, means ‘satellite’ – hey, it’s not rocket science . . . well, actually I guess it is!  (Note how small Sputnik is in the attached photo).  A few weeks later, they were the first to send a living creature into space, a dog named Laika, but typical of the Russians, they neglected to send ‘poop bags’ with him, so he returned quite messy.  Subsequently, Americans feared they were falling behind in the ‘race for space’, which we were, so after two mulligans, we finally launched a satellite, called the Explorer, into orbit in January 1958.

In 1961 the Russians etched another notch in their ‘space belt’ by being the first to put a human in orbit around the earth, Yuri Gagarin, which in Russian translates to ‘Neener Neener’.   The Russians had a few other ‘firsts’, one of them being sending the first woman into space, although some say she has still not returned. 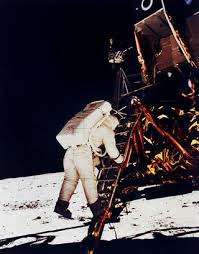 “One giant leap for mankind”

President, John F. Kennedy in May 1961, in an effort to put an end to Russia’s dominance in space, made a speech that challenged our scientists to land a man on the moon (and get him back safely) before the decade was over.  While most of our generation remembers where they were when they heard that Kennedy had been assassinated, we also remember where we were in 1969 when we watched Neil Armstrong deliver on Kenney’s promise, and walk on the moon, as well as proving, once and for all, that the moon was not made of green cheese (it was a rumor at the time, kids!).

Clearly the moon landings have been the biggest event so far in human space travel, but since then the launching of various satellites and telescopes that enhance communication and observation, as well as explore other galaxies have taken over the headlines.  In 2017 I wrote here about the satellite Cassini, that took nearly seven years to traveled over 4.9 billion miles to Saturn, made nearly 300 orbits of the ringed planet, took over 450,000 photos (Not all of them got Saturn smiling) and then crashed into the planet that it knew so well, and remains there today.

70 x 46 feet. The sunshield is the size of a tennis court

The next big thing in space happened in 2003 with the launching of the Hubble Telescope, which has provided astronomers with countless new observations about the vast regions beyond our solar system.

And now, we have the James Webb Space Telescope, which was just launched in December of last year (2021), and has now reached its final destination about a million miles from earth, where it will now orbit around the sun.  To say the least, astronomers are giddy!  Why?  Because with this giant telescope we can see further back in time than ever before.  OK, if that statement just made you shake your head, here’s a quick study on the space-time continuum that even those who didn’t take up space in school should be able to grasp. Light is not instantaneous, even though it seems that way when you turn on a light switch, but it is really fast; it travels at a speed of 186,000 miles per second.  OK, you still with me? The moon is our nearest celestial body in the universe, a short 238,900 miles away, it takes light about 1.3 seconds to travel from the moon to the earth, so we are seeing what the moon looked like 1.3 seconds ago.  Expanding that same logic, the Virgo Cluster of galaxies is the largest 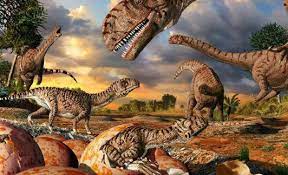 I think that’s me in there somewhere!

nearby collection of galaxies at about 60 million light-years from the Milky Way. Still with me? The light we see today from galaxies in the Virgo Cluster started on its path toward the earth at the same time as the age of the dinosaurs was ending on Earth. So, if you were in a Virgo Cluster galaxy today, and you had a telescope powerful enough to study the Earth, you would be able to see the dinosaurs roaming the earth.  What?!!!  Yeah, I don’t fully understand it either!  But I’m thinking that perhaps one day they will be able to figure out how some of us old dinosaurs that are roaming the earth today will be able to actually travel back in time!  Naah, I’m not sure I want to relive all that all over again!!

It is mind-boggling, but so fascinating for those of us that are still just taking up space.