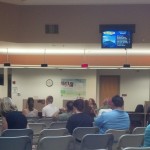 Trivia games on the screen at the MVD. Just like the movies – annoying.

I have a rather uneasy relationship with the Arizona Motor Vehicle Department. So when I got a letter from them last month I opened it with all the enthusiasm I usually reserve for the IRS.  Turns out they wanted me to come in to their delightful establishment to have a new picture taken for my driver’s license.  Again.  This will be the fourth picture I have had on my license.  It’s complicated.

Back in 1998 when we moved here from California I took one week off of work to get settled and attend to important things,  like finding the closest donut shop and, naturally, getting an Arizona driver’s license.  So on a very harried day, when the temperature was 108, I took my moist self and went to the MVD to pick up a driver’s handbook so I could study for the test.  Well, much to my surprise, the clerk told me there was no test. All I had to do is hand over my California license, fill out a form, take a picture and – VOILA! – I would be issued an Arizona license.  Valid, by  the way, until 2015.  Yep – no matter what age you are when you move to AZ, your license is good until you’re 65.  This goes a very long way in explaining why there are so many horrible drivers here.  No one knows what the rules are so we drive by the rules we learned in our former state with the fervent hope that  “STOP” is a universal sign. 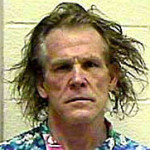 This looks better than my picture.

The “picture” part of this venture was the sticking point – I was harried and sweaty.  Did I mention it was 108 that day?  Anyway, pressed for time, I went ahead and had my picture taken and received my new license on the spot.  The picture, to be kind, made me look like a deranged psychopath.  I want to be clear:  I understand that this was the MVD, not Annie Leibovitz’s studio. I didn’t expect air brushing and subtle lighting.  But I also didn’t expect to end up looking like Nick Nolte’s mug shot.  My eyes were bugged out, my hair looked like a goat ate it, and one half of my collar was up.  How bad was the picture?  Sales clerks who requested to look at my license when I cashed a check would squint down at the picture, look up at me, peruse the picture once more, and then say something akin to, “You must have been having a bad day.”  And these were people who wanted my business.  Finally, I could take it no more.  I decided to lie to the MVD and tell them I had lost my license and needed a new one.  I hoped that they didn’t have any sort of fancy technology that would allow them to simply re-issue it with the very same picture.  I was in luck, I was asked to have a new photo taken – HUZZAH!!  I made sure my hair was slicked down, eyes appropriately positioned and assumed a casual, carefree, I’m-on-vacation smile.  Unfortunately, I forgot to take into account that I had just returned from a business trip to Charlotte the night before.  So while my hair and smile looked okay, I pretty much looked like someone who was jet-lagged and had returned from Charlotte the night before.  I lived with that picture for another two years, strategically placing my thumb over my picture whenever I had to present it to anyone. 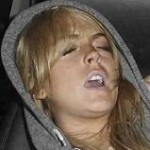 I’m thinking she lost her license that night. Not by choice.

Finally, when I retired (and thus was well-rested), I decided to try one more time.  I was 51 years old and figured that I would have to live with this license for another 14 years.  It was well worth my time to get a new picture.  Besides, I was retired, what else did I have to do?  So I trudged into the MVD and, once again, told them that I had lost my purse and everything in it.   I fully expected them to grill me.  TWO licenses lost in three years?  Lindsay Lohan was a paragon of dependability compared to me.  But instead, the very nice clerk commiserated with me, agreeing that it was such a hassle to get everything replaced or re-issued.  I felt just a little bit bad.  But not that bad.  And my efforts were rewarded.  The picture turned out okay – no hair askew, no “crazy eyes”, no puffy face.  I was satisfied, although I admit that my standards had gotten quite low by this point.

So, fast forward to last month when I got the letter that they wanted, yet again, a new picture of me.  I find it fascinating that they still don’t care if I know the rules of the road but God forbid my picture is more than 12 years old.  Anyway, I braced myself and went down there last Tuesday.  I was told to show up right at 8 am or the wait could be over an hour.  Which meant that at 7 a.m. I was  flat-ironing my hair, curling my eyelashes, and telling myself that it was ridiculous to care this much about my driver’s license picture.  After filling out forms and waiting a paltry 45 minutes, I stood before the camera as I might stand before an execution squad.  The clerk snapped the picture and said, “Oh, that’s great” so my hopes were high.  After all, he  did this for a living.  His judgement must be finely tuned for this sort of thing.  Alas, it was not.  But I think I’ve used up the “dog ate my homework” lost license excuse so I’m stuck with this license for now.  Unlike everyone else in the Western World, I’m excited that I get to visit the MVD in just two years.  I’m starting my picture prep now.

Headlines:  Is that a bulge in your purse or are you happy to see me?

The latest trend, it seems, is women owning guns,

They’re buying up firearms and ammo by the tons.

Some are shooting for the pleasure and some for their protection,

And some want to meet a man and find their “firing” connection.

Money:  How do you say “strike” in Mandarin?

Hoping that their shoppers will become low-price reliant.

Meanwhile Apple has its hand full with its Foxconn dive,

No doubt that these two firms will spawn a Chinese union drive.

Sports:  Be afraid, be very afraid.

Says he’s not dating Kim Kardashian, that she’s just not his type.

He may just be a bit naïve, laying his emotions out so bare,

‘Cause he’s a sports star in the spotlight – and she is so there.

With singing and testimonies that were three hours in duration.

Subscribe to our blog and have it come right to your email.  We can be a refreshing break from ads and friends asking for money.