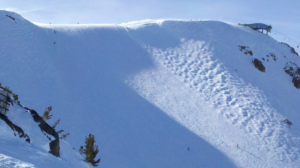 In 1986 I stood atop the 11, 053 foot Cornice Bowl at Mammoth Mountain, skis strapped to my feet and my heart in my throat.  As I peered down the 2.100 foot drop I was simultaneously petrified and thrilled.  I was in my mid-30’s and I knew that if I was ever going to conquer “The Cornice” the time was now.  So, slowly, VERY slowly, I made my way down.  When I reached the bottom I bent over in relief and was cheered by people who had watched my descent.  Right then I knew it was a moment I’d never forget.  To this day it is one of my proudest achievements. Every year when we visit Mammoth in the summer I gaze up to the Cornice Bowl and marvel that I once skied it.    And I thank Dave McCoy.

There are few people in business who devote their entire life to the enjoyment of others, but Dave McCoy, founder of Mammoth Mountain, is just such a person.  McCoy almost single-handedly turned Mammoth, an extinct volcano in the eastern Sierra Nevada, into one of the premier ski mountains in the world.  To me, he epitomizes all that is great about the American Dream.  He was born in 1915 to a somewhat dysfunctional family.  His parents divorced when he was 13.  His mother moved him to Washington but for the next several years he continuously hitch-hiked between there and Independence, California (near Bishop) where he had fallen in love with the scenery and quiet solitude while on vacation a few years previous.  He eventually was hired as a hydrographer for the Los Angeles Department of Water and Power.  His job was to ski the backcountry, measuring snowpack to predict the following year’s water supply. He covered most of Owens Valley sometimes skiing as much as 50 miles per day.  His salary was $4 a day, but the truth is, he would have done it for free.  He just loved to ski. 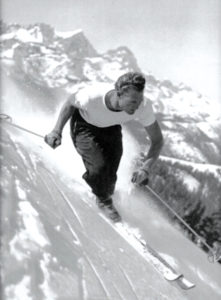 In 1935, he and some buddies built the first rope tow out of an old truck frame and engine to haul skiers uphill in Gray Meadows near Independence. They built it for themselves for weekend play but word spread, and others came to see what all the ruckus was about skiing. McCoy charged 50 cents a day to ride it and some days made as much as $6!   It was 1937 when McCoy started the project that would become the largest ski resort in Central California.   Even while he was building the resort from the ground up, McCoy was always skiing. He was headed toward the 1940 Olympics in Japan but because of World War II, no Olympic Games were held that year.  (Later, he would go on to coach 14 Olympic skiers, never charging them for his time and personally paying their entry fees for race events.)

After World War II record high snowfall in the Eastern Sierras served to attract more and more people from Southern California to ski in the Mammoth area.  The Forest Service took notice, asking for bids to develop Mammoth into a ski area. McCoy made his pitch. To his – and our – good fortune, it was the ONLY pitch the Forest Service received.  He took a piece of paper and drew three lines, which were for chairlifts. That was the business plan.  He always said that the only reason he got the bid was because no one else wanted it.

The first chair lift opened on Thanksgiving Day, 1955.  Without a college education or formal training in business or engineering, McCoy spent the next 60 years growing Mammoth. For millions of skiers, it was the place to ski. For thousands of employees, it was the place to work. McCoy was doing the impossible and people wanted to be part of it. He was encouraging, supportive and most of all, his mission was for people to have fun.  The bottom line was an after thought.  He once told the Los Angeles Times, that skiing had been so good to him at Mammoth, he couldn’t help but to return it to the skiers and see that they had a better place to ski.  I can personally attest to his philosophy.  One day almost 30 years ago my husband and I were walking in the Main Lodge after a day on the slopes and we passed Dave on a stairwell.  He stopped us and said, “Well, did you have fun today?”  We assured him that we did.  At the time, I just thought he was some friendly guy but my husband recognized him right off and stood there, stunned, in awe of the man he had idolized for so long. 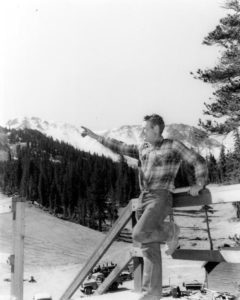 Building a ski resort was just a piece of his contributions to Mammoth.  He personally spearheaded the effort to incorporate Mammoth Lakes and attract businesses to the area.  He was responsible for building a hospital in town.  And in 1989 he and a few friends founded The Mammoth Lakes Foundation to be the catalyst in bringing higher education and the arts to the Eastern Sierra. Today, anyone is who has lived in Mono County for at least two years can receive tuition free of charge at the Cerro Coso Community College that the Foundation built.  The town is what is it today – all because of Dave McCoy.

But in 2005, at the age of 90, he had had enough.  The bureaucracy was too much.  He commented that he enjoyed running the business as long as he could do the planning and the building and permits were easy to get. But it got to where there were too many regulations and politicians telling him how to do things.  It was just too much for this entrepreneurial genius.

There is a wonderful bronze statue of Dave in the center of the Village complex in Mammoth.  Each year I watch people walk by it, not even stopping to read the plaque that graces the base of it.  Little do these people know that but for Dave McCoy, they wouldn’t have the hill they ski, the trails they bike or the restaurants they enjoy in the evenings.  It probably bothers me more than it would bother Dave if he witnessed it.  On the occasion of his 100th birthday in 2015 he commented, “Life is just what you make of what falls in your lap. “Be happy, make the day happy. It’s all in your attitude, the way you open your eyes in the morning. You got to jump up and go do something.”  He’ll be 103 next month and, God willing, this example of the American Spirit will still be doing something.