Ten years ago this week my mother-in-law passed away at the age of 96.  That’s a good run by anyone’s standards but given her life story, it was truly extraordinary.  I’ve been thinking about her a lot this summer as we have wended our way through the coronavirus pandemic.  At times it was easy to get discouraged, between social distancing, isolation from family and not being able to eat the raspberry granola pancakes at our favorite restaurant.  But whenever I would begin to feel just the teensiest bit sorry for myself I would think of all that she endured and realize what a dope I was for being ungrateful.   Some may have read my previous posts about her, or read our book, In the Enemy’s Camp, but for those of you who are unfamiliar the following is a recap. 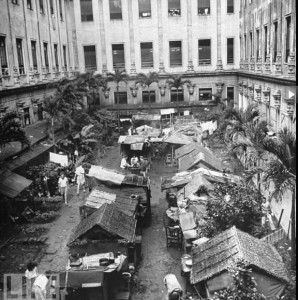 Kathleen Chapman Watson was born in the Philippines to a British mother and an American father.  She enjoyed a wonderful childhood that she spoke about fondly for the rest of her days.  At age 22 she married Daniel Watson, a Scot who was based in Manila working for a Glasgow import/export company.  They expanded their family in 1937 with a son, Richard, and in 1941 with my husband, Alan.  They believed their life to be perfect.  Then in December 1941 the Japanese attacked Manila.  By January, all men who possessed Allied citizenship were taken to an internment camp at Santo Tomas University.  Kathleen and the boys stayed in their home but the Japanese slowly began to confiscate their possessions.  First it was their car, then furniture and finally, their house.  By August, her parents were sent to the U.S. in a prisoner exchange and she saw no choice but to join Danny in the camp.  All told, more than 3500 Allied citizens ended up in Santo Tomas, mostly businessmen and their families.  The overcrowding was stifling, both in terms of privacy and space.  Eventually many of the families, including Daniel and Kathleen,  built shanties outside the main dormitory building to gain some semblance of a home.

For more than three and one-half years they lived with the privations and vagaries of their Japanese captors.  By the end of their captivity they were allotted just 800 calories per day.  Danny had every tropical disease known to man and his 6’2″ frame was skeletal.  Kathleen suffered with malaria throughout their internment.  The news they received was spotty at best and most updates were based on unsubstantiated rumor.  Finally in September of 1944 they heard the rumblings of something unrefutable: American bomber planes.   By Christmas of that year they were still held captive, with increasing retribution and punishments by the Japanese.  The salvation they thought was imminent in September had still not materialized. Yet despite their disappointment, in the diary that Kathleen kept during their time in Santo Tomas, this is what she wrote on that Christmas Day:

Contrary to all expectations, Danny and I have agreed that is is the happiest Christmas we have ever experienced because our sense of appreciation has been so sharpened that every simple thing has appeared in a roseate hue.  This Christmas season, watered by the tears of desperation and despair, and enriched with a great hope for a new future in a brave new world, is a Christmas which we shall always remember.

Her children were habitually hungry, she and her husband were weakened and sick, and she hadn’t seen her family in over three years. Still, her optimistic attitude shined through.  It was her defining characteristic until her dying day – she always found something cheerful on which to focus.  So, as I said at the beginning of this post, whenever I feel a little down with all that’s going on in the world I try to channel her buoyant outlook and remember that as bad as things are, I’m not living in a leaky shanty held captive by an invading army.  Sort of puts things in perspective.

2007 – Kathleen with her two great-grandsons

Footnote: Kathleen’s optimism was rewarded in February 1945 when the First Cavalry burst through the gates of the camp and rescued the prisoners.  The family set sail for the United States in early April and by mid-May they were safely docked in Los Angeles.  Abandoning their plans to move to Scotland, they decided to settle in Pasadena, where they eventually started a business, worked hard, and lived the American dream.