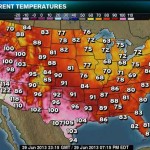 Well, here we are. The dog days of summer only…oh yeah, it’s only the first of JULY! Everyone on the West Coast is experiencing a heat wave but aside from Death Valley (aptly named this time of year I might add), Arizona is as hot as a place can be without actually experiencing spontaneous combustion. Right about now our nickname of “Valley of the Sun” changes to “Face of the Sun”. But just as people prepare to live in Minneapolis or Fargo in January, we denizens of the desert have also learned the best way to adapt to summer: we make lists. Those of us who spend any time here frying in the summer heat start making lists of projects to undertake when it’s just too darned hot to venture outside. Usually my list is filled with really exciting stuff – alphabetizing the spice rack, sorting socks, reviewing just how it is that I didn’t lose those last 10 pounds over the winter.

One staple on my list is “clean out closets”. I don’t know what happens over the course of a year to mess them up. Surely it isn’t anything I’ve done. I’ve long suspected that little elves come at night with U-Hauls full of crap to dump in my storage areas. However, as it happens, each summer I spend a good part of my time throwing stuff out. My litmus test for every piece of paper, dusty lampshade or two-year old box of oatmeal is this: if we sold our house would I pay to move or store this item? It’s amazing how quickly that separates the wheat from the chaff. Or in this case, the possible antique from the junk that wouldn’t sell at a garage sale.

So on Saturday, when the temperature reached 119, my choice was to begin to work on “my list” or spend the day looking at the beach on Google Maps. I chose to clean closets. I started with my office – or as I like to think of it – the low hanging fruit of closet cleaning. Amongst all of the paraphernalia I found a box from my working days. It was a treasure trove of useless junk, most of which no longer has any appreciable use. For example, I don’t know why I brought the desk plaque with my name and title on it home. I’m fairly certain that my husband and the dog know my name. I found a file that contained every performance review that I had received since 1987. Really. What in the heck did I ever think I would do with them? Surely the neighbors are not interested in coming over for a robust discussion about my goals in 1994 no matter how much wine I give them. I had congratulatory letters from my promotions and cards that people had written to thank me for something that I can no longer remember. Worst of all, I had saved all of the cards I received when I retired. Worst, not because I had kept them, but because I couldn’t remember who half of those people were. (On the flip side, I was amazed how many people I do stay in touch with. Thank you, Facebook.)

At the bottom of the box was a file labeled “Interesting Articles” . Over my working years I would collect magazine articles or newspaper columns that I found either motivating or inspirational. Anyone who ever worked for me became familiar with my “worth sharing” memos. And now, looking back on it, I suspect that most of the time my pearls of wisdom went to the bottom of their reading pile and then mysteriously found its way into the waste paper basket. But now that I’d found the file I was curious to read them again and see if they stood the test of time. And you know what? They have. I guess whether you’re a business executive or just the head pooper scooper, there are some things that remain constant.

For example, one of my favorite articles was titled “Not Everything Is Worth Doing Well”. When I first read it back in 1986 it was a real revelation for my Type A-perfectionist-drive everyone crazy personality. Back in the day there wasn’t much I did that was slap-dash, if one can overlook some rather unfortunate hairstyles. Even now, some people might say that I’m wound a bit too tight. Some people like my husband or anyone else who has spent more than an hour in my company. But the gist of the article is that you can drive yourself crazy trying to do absolutely everything to perfection. The author suggests that we prioritize our tasks and give our all only to the items at the top of the list. For example, she says that housecleaning doesn’t always need our very best effort. See? I told you it was a great article. Now if people look at my dusty coffee table with disdain I can tell them with clear-eyed conviction that “dusting” simply isn’t near the top of my list. Think of the possibilities. If I really focus I think I can add several more domestic chores that simply aren’t worthy of my time. Like cleaning closets. Next year, it goes to the bottom of the list.  I’m going to the beach.