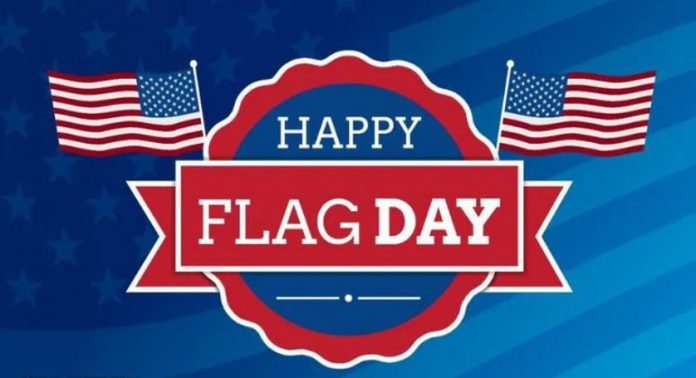 Last week was Flag Day, our annual celebration of the stars and stripes.  Did you miss it?  I almost did but my Google calendar conveniently reminded me. I’m not sure the day gets its due, given that it falls between Memorial Day and the 4th of July.  In fact, I’m not even sure how Flag Day got its start or how we are officially supposed to celebrate it.  Unlike the two aforementioned holidays, I don’t see people laying wreaths on graves or barbequing hot dogs on Flag Day.  So, in preparation for next year, I decided it was high time for me to find out what the day is about and whether it will require a trip to the grocery store to properly prepare for it. 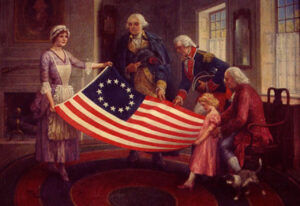 Betsy, showing her handiwork to Washington

President Woodrow Wilson officially proclaimed June 14th as Flag Day in 1916.  June 14th was chosen because the original adoption of a national flag was June 14, 1777.  In 1949, National Flag Day was established by an Act of Congress.  That could possibly be the last time Congress passed anything on a non-partisan basis.  In any event, it was good to have a national flag.  Up to that point, states had their own flags and George Washington felt it was important to rally the troops around a single flag.  History books tell us that he approached his personal seamstress, Betsy Ross, to sew the first flag.  Note, she is not credited with designing the first flag.  In fact, it has since been confirmed that Francis Hopkinson, a delegate from New Jersey who signed the Declaration of Independence, designed the American flag. But when charged with bringing the design to life, Betsy did make one significant change.  The original plan was for the thirteen stars, representing the original colonies, to be six-pointed.  However, Ms. Ross, being efficient and most likely anticipating her future workload, decided to make the stars five-pointed because she could fold the fabric in half and cut them out in one swath.  I like to think of her action as the beginning of the industrial revolution.

In any event, once our freedom from the British was secured, we didn’t pay much attention to the flag itself.  It wasn’t until 1885 that the flag got its own day.  That year, Bernard Cigrand, a small-town Wisconsin teacher, originated the idea for an annual flag day, to be celebrated across the country every June 14. That year, he led his school in the first formal observance of the holiday.  From that point on, he devoted his life to promoting the observance of Flag Day.  He became president of the American Flag Day Association and later of the National Flag Day Society, which allowed him to promote his cause with organizational backing.  With that backing, many cities and towns organized parades and picnics to celebrate the day.  I’m sure food was involved but I don’t think there is anything official.  I see an opportunity to declare cake the food of choice for Flag Day.

Another interesting fact about Flag Day is that it has to be proclaimed by the President each year.  Seems rather odd that they just can’t issue a permanent requirement to observe it every June 14.  Then again, isn’t it perfectly fitting that the government works in such an inefficient manner?  I checked on this and, sure enough, President Biden issued a proclamation for Flag Day 2022 on June 10. People may have been too distracted by inflation to notice.  Plus, I think the flag gets a bad rap in general these days.  Too often people confuse patriotism and love of country with politics.  People employ the flag to signify how patriotic they are, even when they are really just trying to send a political statement. 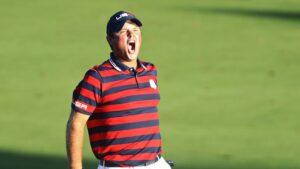 This conflation of patriotism and politics is often seen in the sports world, by both players and fans.  Perhaps no better example of someone who “uses” the flag is the golfer, Patrick Reed.  He was so over-the-top patriotic at the Ryder Cup a few years ago that he was branded “Captain America”.  That was then.  This is now: Reed signed on with the new LIV golf tour, sponsored by the Saudis, for a lot of money. So much for his patriotism.  Or maybe he just needed gas money. Regardless, I doubt we’ll see Mr. Reed sporting the red, white and blue when he tees it up in his first LIV tournament next week.

So now you might know a bit more about Flag Day.  You’ve got plenty of time to go buy a flag, organize a parade, or better yet, bake a cake in preparation for next year.