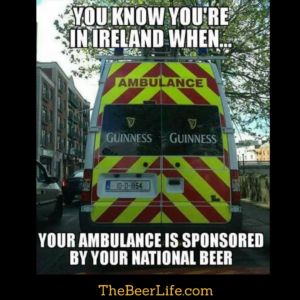 Surely, ’tis the best week of the year, is it not?  St. Patrick’s Day is not until Wednesday but some of us have begun celebrating early.  I am personally contributing to the festivities by drinking a pint of Guinness every day. Guinness is the mother’s milk of Ireland, and for good reason.  Three years ago I had the good fortune of spending time in the Emerald Isle with four of my girlfriends.  On the first day of the trip I ate something that didn’t agree with me.  Our driver suggested that I “take a Guinness”, extolling it’s virtues as a cure-all for most any ailment.  I gulped it down and, sure enough, I began to feel better.  He went on to explain that when he was growing up, doctors were scarce – and unaffordable – so Irish mothers gave their children a nip of Guinness whenever they were sick, as it was believed to be chocked full of vitamins and minerals.  Sort of the Irish version of Children’s  One-A-Day. 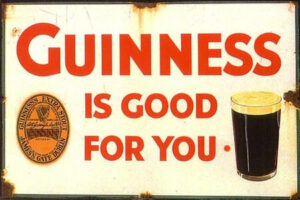 Once back home I began to research the miracle of Guinness.  Was it really a health food?  Should I be drinking more?  Turns out that back in the 1920s, when the “Guinness is Good for You” slogan was introduced, the claim was based on market research that found people felt good after they drank a pint of the dark and foamy stout.  Okay, but substitute “stout” for almost any form of alcohol and you’d probably have the same result.  Soon after the slogan gained popularity the flimsy claim was bolstered by the discovery that Guinness contains iron. A ha!  Now we’re getting somewhere.  Even pregnant women were advised to have an occasional pint. Of course, it would take something like a dozen pints a day for a woman to get her recommended daily allowance of iron, in which point the alcohol and calories would cause more harm than good.

But in 2003 researchers at the University of Wisconsin found a truly redeeming feature of the beloved Guinness.  Turns out that stout beer like Guinness (as opposed to lager and other light beer) is high in the antioxidant compounds called flavonoids—similar to those found in red wine, tea and chocolate—that can reduce the risk of heart attack from blood clotting.   The researchers carried out laboratory tests on dogs with clogged arteries, comparing the effects of Guinness and Heineken. Only those dogs fed Guinness had reduced clotting.  Wow – red wine, chocolate, dogs and Guinness.  The gods have come together to link all of my favorite things together into one healthy bundle!  I should live to be 100. 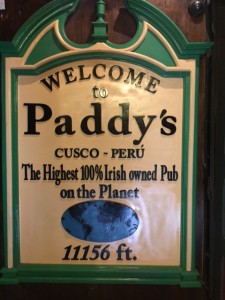 My brother and I share a love for Ireland, even though our DNA results show our Irish heritage to be somewhat limited.  I am 12% Irish and he is 8%, which doesn’t seem fair because he has frequented a lot more Irish pubs than I have.  In fact, he has a unique ability to find an Irish pub everywhere he travels.  When he hiked Machu Picchu,  he fortified himself beforehand at Paddy’s Irish Pub in Cusco, Peru, which holds the distinction of being the highest elevation pub on the planet at over 11,156 feet.  I recently watched the Amazon Prime Video movie “The Irish Pub” and it became clear why we cling to our small but powerful Irish ancestry.  The documentary highlighted pubs all over Ireland, interviewing the owners and customers.  Charming doesn’t begin to describe it.  Yes, some of the pubs were dark and possibly had not been cleaned since 1947.  But the owners and customers alike took great pride in their establishments and their welcoming of strangers.   Anyone who has visited Ireland can attest to that – the Irish seem to be universally good-natured and friendly.  The film made it clear that the local pub provides a gathering place for people to chat and get to know one another and many customers remarked that they would rather do that than watch television. 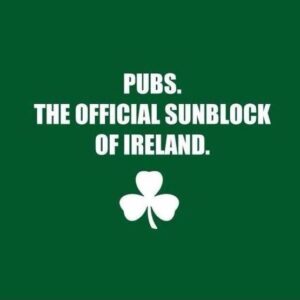 I think what we can conclude from all this is that America would be a far better – and healthier – place if we all gathered down at the local pub for a good conversation and a pint of Guinness.  Throw in a dog by the fire and that’s about as close to Heaven as one can get. 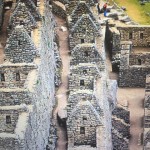 We had an early wake-up at 5:00 a.m. At breakfast we could see other groups in camp heading down to the trail and turning left toward Machu Picchu, when we got to the trail, Humberto turned right. We looked at each other quizzically, as we knew he knew that Machu Picchu was the other way, but we also knew that Humberto wasn’t lost, so we followed. After a fairly short hike, we came to a clearing and to a placed called Winaywayna. I’ll come back to explain more. 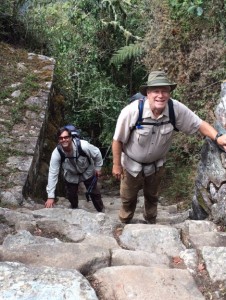 Pat and me on the ‘Gringo Killer’

We turned around and headed for Machu Picchu, but just prior to getting there Humberto tells us to go ahead of him, that he wants us to experience this on our own. So we round the next bend in the trail and are confronted with what is known as ‘The Gringo Killer’. It is the trail, or more aptly a ladder, of granite stones going straight up that requires hand-over-hand climbing to scale them. About half way up we look back to see Humberto standing there with a big grin on his face.

Shortly after ‘The Gringo Killer’ we come to the Sun Gate, which is the unofficial entrance to Machu Picchu from the Inca Trail; we renamed it ‘Rain Gate’ since it had started to rain again. The Sun Gate is on a ridge above Machu Picchu and was built by the Incas in such a way that the sun would shine through a hole in the stone and onto Machu Picchu on December 21, their summer solstice that marks the half way point of their year.

From the Sun Gate, for the first time, we see the vast expanse of Machu Picchu, the mountains that surround it and the incredible stonework that the Incas crafted. The many pictures of it that I’ve seen since booking this trip, and the many descriptions I’ve read, all pale in comparison to standing there and taking it all in. It is such an incredible work of architecture and art that it just boggles the mind to think about how it was all put together. I try to envision how it was back then, the movement and placement of the stones, the terracing of the steep mountain slopes for crop-growing, the creation of intricate irrigation systems for drinking, bathing and nurturing the crops. I try to envision the approximate 400 inhabitants going about their daily lives in this Andean paradise. 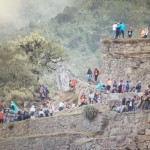 But it’s hard, when I look down and see hundreds of tourists milling around through the complex. Unfortunately we arrived on a Saturday and the place was shoulder-to-shoulder with people from all over the world, who had come early by train to see a sun rise over the Sun Gate on this rainy day. That’s not to say that it ruined our experience, it didn’t, it just colored it a little differently than we would have liked.

Back to Winaywayna – when we left camp and turned right, Humberto wanted us to experience something very special. As we came around the corner to Winaywayna (it means ‘forever young’), we all just stood there in awe and said, “Wow”. It is a complex similar to Machu Picchu, only much smaller – stone wall terraces, stone buildings, and irrigation systems that were still working, while several llama were grazing on the terraces. And on this beautiful mist-covered morning, we were the only ones there. The only ones there! We would appreciate that much more when when got to Machu Picchu.  We walked out on several terraces, examined the water features for irrigation and bathing and looked at the living quarters, all made of stone that will be there for centuries to come. The four of us talked about it later and concluded that being at Winaywayna that morning was on all of our ‘top 2-3 highlights’ of the trip. I can’t speak for the others, but for me it was somehow an incredibly spiritual experience.

We spent about three hours touring through Machu Picchu as Humberto gave us vivid and detailed accounts of Incan life here during the 15th century. I mentioned earlier that your guide can make or break your trip – we were extremely lucky to have someone with the knowledge and wisdom of Humberto – he made our trip!

From Machu Picchu we take a train into the Sacred Valley where we meet our van that takes us to the Sol & Luna Hotel, where we have our first shower in four days – you can imagine that our van didn’t exactly smell like a bouquet of roses! We had dinner at the hotel and, exhausted from four exhilarating days in the Andes, we were all anxious to get into a real bed.

The next day we went into Cusco for our last day in Peru. As our van came through the hills over-looking Cusco, we were reminded of the ever-present poverty that exists in this country. Ironically the homes on the hillside that have spectacular views of the city and the Andes, are the most impoverished, as the higher up on the hill a home is, the colder and windier it gets, and thus less desirable. 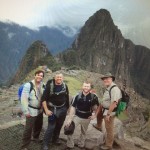 Pub, having a beer and a cheeseburger while watching the 49ers beat the Ravens.

It was an incredible adventure; one I’m glad I didn’t wait too much longer to do.  Thank you to Patrick, Steven and Graydon for sharing this awesome, life-time experience and thanks to those of you who followed along vicariously; as you know, you’re the reason I do this crazy stuff.