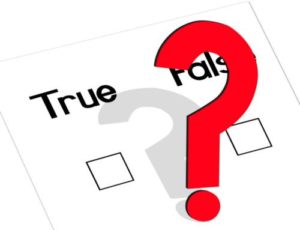 I met up with a friend at the gym last week and as she was whirling away on the stationary bike she tried to find an unbiased news report on one of the five TV’s in front of her.  “Where do you go to get unbiased news”, she asked, as she swiveled between CNN, Fox and MSNBC.   “Sesame Street”, I responded, “it tells me everything I need to get by in life”.  I was only half-kidding but it is a subject I’ve been thinking about in this increasingly divisive atmosphere we’re in.  As my brother correctly pointed out last week, we are Presbyterians so we don’t wade into the political fray in this forum.  However, I will observe that every network seems to have camped out on one part of the divide or the other and they’re all getting richer for it.  The networks obviously pander to their audience, grasping for ratings and ad revenue at the expense of our edification. 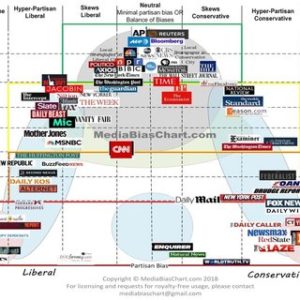 I know I’m not the only one who is disgusted by the news coverage.  Sure, I could watch C-SPAN all day long but that smacks of being a bit too nerdy, not to mention my tolerance for windbags is at low ebb right now.  I consulted my friend, Google, and found several charts that basically tell us what we already know – a few organizations (mostly print) try for impartiality, but most fall into either left-or-right leaning, and then there’s a whole category on the bottom of both sides that is garbage.  So, where DO we go?  I found a website, allsides.com, that provides articles on the same subject by left, center and right leaning print media.  That seems like a whole lot of reading for me.  I’m trying to think of a subject that would interest me enough to read three articles about it.  Outside of the Food section, I couldn’t think of one.   One could always go to mediabiasfactcheck.com but there are a LOT of ads and it’s a bit distracting.  Snopes, of course, has been the go-to for figuring out internet and Facebook claims but there are wide-ranging topics one has to wade through, such as today’s top question: Can the snakehead fish survive on land?  I’m sure that’s of great interest to the snakehead fish, but I venture it’s of limited interest to everyone else. 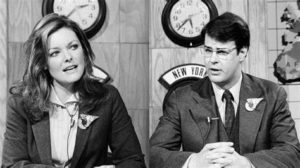 What I really long for are newscasts that present information in a factual way, and then have really smart people debate the issue in-depth so that I can sort through the facts and form my own opinion.  For those of us of a certain age, we can recall the 60 Minutes segment, Point/Counterpoint featuring Shana Alexander and James Kilpatrick.  It was good old-fashioned sparring over a new topic each week and was always good entertainment as well.  So good, in fact, that it spawned the Saturday Night Live parody of it featuring Dan Ackroyd and Jane Curtin.  Its seminal line may have been, “Jane, you ignorant slut”.  Mark Shields and David Brooks do a political point/counterpoint on the Friday night edition of The PBS News Hour, but somehow, it just isn’t the same.

The upshot of all this is I barely watch the news at all anymore.  I read a bit and try to vary my periodicals so I get different opinions.  I’m saving my TV watching for Netflix.  I just looked up the 20 most popular British TV series, many of which have multiple seasons available for viewing.  The advantage of the British shows is that you get to hear that glorious accent and there aren’t any references to American politics.  I’m hoping these shows will keep me occupied though the 2020 election. If not, there’s always BritBox.