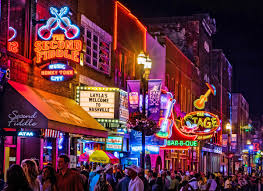 Preface – Yes, I know I wrote a story a couple of years ago about going to Nashville, but it was really Linda and Dana who went and I wrote about it vicariously. And OK yes, my last blog was about a hot air balloon ride that I never took, but I really did go to Nashville this time . . . honest! Linda and I went with three other neighborhood couples, Patrick & Pam, Mike & Tanis and Bob & Jeanne, and had a ball.

Thursday – A direct flight from L.A. to Nashville got us into town with time enough to check into our hotel and get to the Predator-Duck hockey game which was at nearby Bridgestone Arena. The Ducks, who were hot, having won 7 of their last 10 games, ran into a Predator buzz saw that had won 8 games in a row. Make it 9 – they handily beat the Ducks 4-2. The most impressive part of the evening was the Predator fans – they were the most involved fans I’ve ever seen. After the Predators scored a goal they would all chant in unison, “Gibson (Ducks’ goalie), you suck, you suck, you suck, it was all your fault!” After the Ducks scored, you could hear a pin drop in the arena. After the game it was just a block’s walk to Music City’s main street, Broadway. One of the first things you notice here is construction cranes on every block, scaffolding on many building and sidewalks torn up – this city is growing in leaps and bounds. 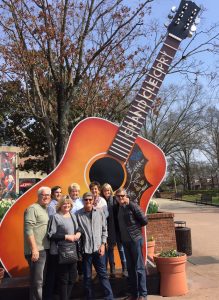 In front of Grand Ole Opry

We stayed out for a couple of hours moving from bar to bar, each with a different singing group playing. To be honest, if this would have been my only exposure to Nashville, I would have

gone home disappointed, as the music was very loud (all electric, no acoustical guitar) and mostly commercial rock, not country, with wall-to-wall people in every bar, difficult to get a drink (that was over-priced) and impossible to find a place to sit down.

At the end of the evening we walked the four blocks back to our hotel and were spared the rain that was predicted, but it was bit of a chilly evening, getting down to 28 degrees. I went to bed hoping that tomorrow would be a better day – it was!

Friday – We walked a few blocks from the hotel and found a great southern breakfast place, Milk & Honey replete with Chicken & Waffles and Hodgepodge – a mix of . . . quite honestly I don’t remember everything that was in it but it was really good!

After breakfast we waddled back to Broadway and 2nd Avenue, where I found the Nashville I was looking for – acoustic guitars, songs where you could understand the words and groups with tight harmonies. Yes, music in Music City starts with live bands right after breakfast!  I was particularly impressed with two bands, both of which had female singers who played the fiddle and sang great harmony. That’s more like it!!! 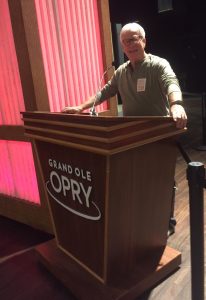 After several unsuccessful attempts to find a good brisket for lunch, we headed out of town to the Grand Ole Opry. It used to be located right downtown in the Ryman Auditorium, in fact the Opry was there from 1943 to 1974 when it was decided it needed a bigger room with better parking, so it’s now about 20 minutes out of town. We booked a ‘Back Stage Tour’, which included a look at all the dressing rooms and pictures on the wall that tell the history of the Opry. It is quite a magical place. We all got to go on the stage and as you can see in the photo, I was given a special accommodation. OK, that’s bullshit, but everything else is true. After the tour we walked next door to the fabulous Gaylord Hotel; if you’ve ever been to any of the four Gaylord Hotels in the U.S. you know they are extravagantly fabulous, with a huge atrium in the center with a river running through it. We had dinner at the Jack Daniels Restaurant and felt obligated to order some Jack Daniels – just to try to fit in. Still no brisket, but a very tasty smoked prime rib! After dinner we walked back to the Grand Ole Opry for the Friday night radio show. 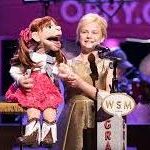 A radio show is broadcast from the Grand Ole Opry every Friday, Saturday and Tuesday night, it originated in 1925 as a one-hour radio ‘barn dance’ broadcast on WSM. You can still hear Friday’s and Saturday’s show on Sirius XM radio Channel 59 – Willie’s Roadhouse. This night there were a total of 11 acts each singing 2-3 songs, featuring The Oakridge Boys, Riders in the Sky and Darci Lynne, the 13 year old ventriloquist who won America’s Got Talent last year, making her Opry debut. Of the 11 acts some had hits on today’s charts and some were from the country Jurassic period, but all were good. There was also a comedian Gary Mule Deer – hilarious!! Look him up on YouTube.