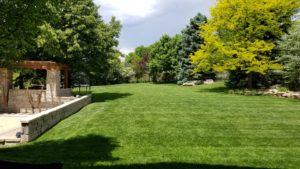 For the past several years we have made the trek to Denver to spend time with family. Denver is beautiful and the snow on the peaks of the Rockies this year is especially spectacular. On past visits we have seen the Red Rocks, Garden of the Gods, Boulder, The Broadmoor in Colorado Springs and the restored Union Station in downtown Denver. We have strolled the cute downtown area of Cherry Creek and scoped out the golf courses down in Castle Pines. In other words, we have seen a lot! So on this trip our goal was to just enjoy family time. A goal, I’m happy to say, that we achieved with much success.

First, we had a lot to celebrate. Our oldest grandchild just graduated from high school, the youngest turned 16 while we were there, and our kids will celebrate their 20th wedding anniversary next week. So in great part we just reveled in the joy of being at this point…everyone happy, healthy and enjoying life. Who needs to go anywhere?? 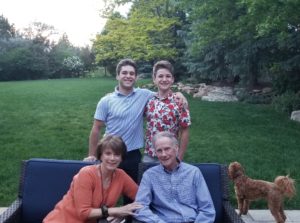 Second, the reason we settle into our “happy place” while we’re there is that the backyard of the kids’ house would rival any park of scenic vista we could go visit. Give me Dash the Wonder Dog, a cup of coffee, a good book and life is good when I’m sitting out there. Add some good conversations and I’m as happy as a pig in slop.

Which brings me to what we did do – eat. Denver has tremendous restaurants and we’ve become regulars at some each time we visit. Hillstone is a great place for delicious salads, juicy burgers and fries that will put you off your diet with one whiff. We enjoyed a great dinner at Jing, an elegant Chinese restaurant where one can order the Kobe steak “signature dish”, thinly sliced pieces that you cook yourself over a hot sizzling rock. Kind of a Chinese version of fondue.  Our grandson ordered it and marveled that it was only $35 for an entire platter of premium steak. He mused that it must be so cheap because you have to cook it yourself. When the bill came my husband handed it to me because I was the one with reading glasses. I couldn’t imagine how our bill had climbed so high until I read the details. Unfortunately, that “signature dish” was ordered by the ounce, a little detail that had been overlooked. So…the “good deal” was $105! Our grandson was mortified but we got a good laugh about it.

Our last night out we went to Shanahan’s – founded by former Bronco coach Mike Shanahan. It’s a fun steakhouse and we’ve never been there when both the bar and the dining room weren’t packed. They specialize in steaks but their fish, salads and sides are equally good. The best part? Our son-in-law picked up the tab!

Mostly we spent enjoyable time at home – talking, catching up, watching some playoff games and walking the neighborhood. For five days I was reminded that sometimes the best place to go is the backyard. 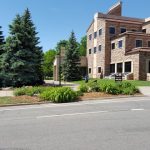 We’ve just returned from a wonderful trip to Denver to see family.  We enjoyed fabulous times in their spa-like back yard, a great meal at Shanahan’s, and a lung-collapsing walk at the 5200 foot elevation.  It all seems like a dream now that we are experiencing record heat in the desert.  Were we really feeling chilly just a week ago?  To compensate for today’s triple-digit temps, I’m going to harken back to that time long ago – last week – to describe our day trip up to Boulder.  Maybe just thinking about it will make me feel cooler.  Or more confused – read on.

First, it must be said that Colorado is one of the most beautiful states in the country.  It’s little wonder that Denver is now one of the fastest-growing cities in the nation – good jobs, good housing and spectacular surroundings.  We have been to Denver a few times so this trip our daughter thought it would be fun to venture up to Boulder.  We were excited to see a city that we’ve read so much about – a burgeoning tech community, fun college town, and haven to hippies and retirees alike. 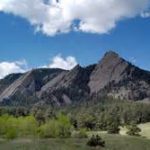 So off we headed for the 45 minute drive and decided to take Dash the Wonder Dog along for the ride.  After all, Colorado is one of the more “outdoorsy” states; you can hardly walk a block without seeing someone with a dog.  Or two.  In Boulder more than a third of the population owns a dog so we expected Dash would be in his element.  As we approached the city the first site that came into view was the Flatiron Mountains, a range of five peaks that have a sheer upright face.  Images of the Flatirons are ubiquitous symbols of the city of Boulder.  The city government, the University of Colorado, and many businesses make use of this symbol in their logos, advertisements, and marketing materials.  The mountains form a perfect background for the CU campus.  Combined with the hundreds of trees and the park-like setting, it has to be the most idyllic school in the country at which to goof off rather than go to class.  The center of downtown Boulder is home to the Pearl Street Mall, a four-block pedestrian mall that has cute shops, numerous restaurants and more than it’s fair share of street “performers”.  We found a parking spot close by and embarked on a tour.  We drifted in and out of many of the stores and in each one, Dash the Wonder Dog received oodles of attention.  In one store the clerk asked to have her picture taken with him.  In the kitchen and home store the clerk engaged me in a long discussion about Cavalier King Charles Spaniels.  So far, we were loving Boulder.  For a fleeting moment, recalling the forecast for Scottsdale this week, I thought perhaps we should go home, pack up and move to Boulder. 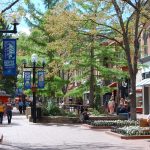 About half-way through our tour of the mall we came to the restaurant that our daughter suggested for lunch.  My husband ran in to take a look at the menu (to say he’s not an adventurous eater would be an understatement of gargantuan proportions) and to see if we could sit at one of the tables on their patio that abutted the mall.  He came out of the restaurant with a rather stunned look on his face.  I assumed that the “special of the day” was elk ear or moose gizzards.  But instead he told us that not only was Dash not welcome on their patio, but that dogs were not allowed AT ALL on Pearl Street Mall.  Whaaaaat?  Just five minutes before Dash was sashaying around the place like he was the mayor.  And now he’s not allowed?  Sure enough, we looked at the signs on a pole at the entrance to the mall and in addition to No Spitting, No Loitering, and No Bikes was the sign I hate most of all – No Dogs.  You’d have thought one of the people who worked in the stores might have said something.  I’m guessing that they are secretly dog owners who think the rule is stupid.  We finally found a restaurant perpendicular to the mall where Dash could join us as long as he was tied up on the street side of the patio.  He was not amused.  After we got back in the car, I did a quick Google search and sure enough, Boulder, contrary to what one might expect, is not a dog-friendly town.  Turns out that “man’s best friend” is not allowed in any restaurant patio or to be off-leash at any time.  Uniformed Animal Control agents patrol the city and are quick to give out citations for any violations.  Geez, I guess we were lucky that Dash didn’t end up behind bars.

So, what was my impression of Boulder?  It’s truly a spectacular city with beautiful views, a vibrant college campus, great shopping…and stupid dog laws.