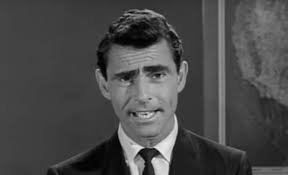 You are in a dimension as vast as space and as timeless as infinity. It is the middle ground between light and shadow, between science and superstition, and it lies between the pit of man’s fears and the summit of his knowledge. A world where your imagination is the only ticket required for passage.  Next stop: The Twilight Zone of Travel.

You’re on a dark, desert highway, cool wind in your hair, warm smell of colitas, rising up through the air.  Up ahead in the distance, you see a shimmering light.  Your head grows heavy and your sight grows dim.  You had to stop . . . but not for the night.

That shimmering light is 50 miles south of Palm Desert in a place that rivals Palm Springs in popularity and draws more visitors than Yosemite.  You are on the desert floor at 223 feet below sea level.

You have arrived at the wonderfully, bazaar Salton Sea. 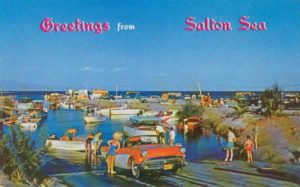 Salton Sea in the 50s

You are just in time to witness one of boating’s 21 world speed records, as the high salinity makes boats more buoyant and, at more than 200 feet below sea level, barometric pressure improves performance.  Speed boats, water-skiers and fishermen populate this body of water that is larger than Lake Tahoe.  Its shorelines are dotted with beach-front motels, yacht clubs and fancy restaurants.  It is a place that caters to over one million visitors a year, looking to get away and relax in the sun and possibly to invest in what is called the ‘California Riviera’.

You’re at the North Shore Beach & Yacht Club, which just opened the largest marina in southern California, where celebrities including Frank Sinatra, Bing Crosby, the Marx Brothers, Jerry Lewis and Desi Arnaz gather at this Salton Sea beachfront motel.  Your plan is to have some cocktails, a nice dinner and take in a performance by the Beach Boys, who were appearing live that evening.  The only problem . . . 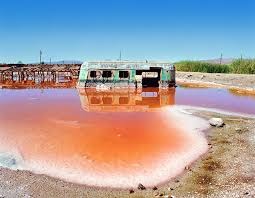 Shoreline of the Salton Sea today 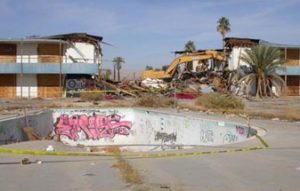 The North Shore Beach & Yacht Club no longer exists.  In fact much of what was built to lure visitors and investors to this area has been ravaged by 120-degree heat, 75 mile per hour winds but mostly by a body of water that was created when the Colorado River breached a dike in 1905, releasing water that became the Salton Sea, an ecological disaster dubbed the ‘Accidental Sea’. 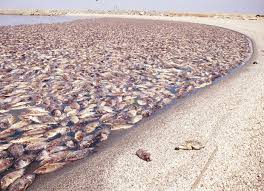 Over the years, due to the heavy alkalinity which causes a lack of oxygen in the water, the sea has become uninhabitable – in fact over 1.7 million fish died in one day . . . yes, in one day.  And if things weren’t bad enough, the Salton Sea sits directly over the San Andreas fault. 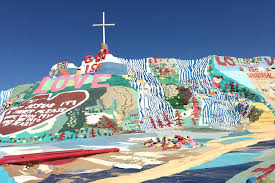 If you continued your journey along the east shoreline of the sea, you’ll hit the not-so-bustling town of Niland, population of less than 1,000 – fewer during the summer.  From there, since you’ve already come this far, it’s just a short distance to a must-see attraction – Salvation Mountain.  Constructed by Leonard Knight, who started building the 50 foot mountain in 1984; this masterpiece is resplendent with not only biblical and religious scripture such as the Lord’s Prayer, John 3:16, and the Sinner’s Prayer, but also includes flowers, trees, waterfalls, suns, bluebirds, and many other fascinating and colorful objects.

And just when you thought that things couldn’t get any weirder, you continue east on the road another mile or two and find Slab City, ‘the last lawless place in the United States’.  And you ask yourself, can this ‘last lawless place’ really be that unsafe?  Here’s a quote from one of the residence of ‘The Slab’. 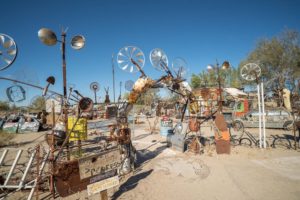 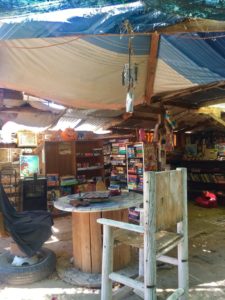 “There are definitely some murderers in Slab City, but they would be stupid to do anything here. They might have killed people in the past but they surely won’t do it here, they are hiding. So you could say, this is one of the safest places on earth!”

OK, it’s time to get out of the sun and this Twilight Zone episode.  Thanks for joining my virtual tour; can’t wait to actually go there . . . or NOT!