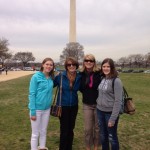 The Watsons at the Washington Memorial

Several weeks ago my niece, Shelley, asked me if I’d like to accompany her and my two great-nieces to Washington DC over Spring Break. It took me a day to mull it over – not because I didn’t want to go but because I was afraid that “Old Aunt Sue”, as I am affectionately known, might drag down the trip.  After all, my two great-nieces, Katie and Abby, are elite athletes and Shelley is an ace tennis player.  I try to walk 10,000 steps per day, which is about 5 miles, but the sport I excel at is sitting on the couch, knitting and watching re-runs of Downton Abbey.  Often when I move the snaps, crackles and pops that emanate from my back, hips and knees are reminiscent of Rice Krispies.  But what the heck, it was the chance of a lifetime so I packed my ibuprofen and off I went.  Through some cosmic coincidence, my niece’s husband is also a Watson so the trip was dubbed “The Watsons Go To Washington”.  We met up in Dallas and flew into Reagan airport, landing at 12:30 a.m.  I was already way out of my element…even though my “body time” was 9:30, I was ready for bed.  We hopped in a cab and made the rookie mistake of telling our cab driver we wanted the “fastest” route to our Bethesda hotel.  He interpreted that as “speediest” so he took us the long way via freeway vs. the short way via city streets.  So it took 20 minutes and $30 more than it should have.  The rubes had arrived. 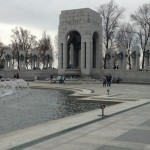 The next day we set off to see the sights.  We quickly learned the Metro system, which is pretty much like every other rail system in the U.S. – it’s crowded, makes frequent stops, and is full of “interesting” people .  After a 20 minute ride we disembarked in downtown Washington and began our walk to the National Mall.  The first thing that struck me was the sheer size of it.  It spans two miles from the Lincoln Memorial on one end to the Capital Building on the other.  We decided to split up our tour – half one day and half the other.  Since the Lincoln and War Memorials were high on our “must see” list, we began there.  First up was the Washington Memorial.  Unfortunately, it was under construction or as the guides told us, it was undergoing a face lift.  Aha!  Something I could relate to – I felt like I was back in Scottsdale.  We ventured on to the World War II Memorial which is  massive and beautifully thought out.  One side is devoted to the Atlantic theater and the other to the Pacific.  The countries where the fighting occurred and the names of the major battles are listed on the fountains under each cupola.  The most sobering feature was the wall of stars – over 450 gold stars on a field of blue, each star representing 100 men who died in the war.  No WWII vets were visiting when we were there but I imagine it must be overwhelming for them to see such a stunning tribute. 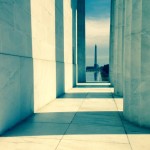 From there we walked along the Lincoln Memorial Reflecting Pool to the (you guessed it) Lincoln Memorial.  Let me just say …it is HUGE.  Oh sure,we’ve all seen it in text books and movies but really, you cannot grasp the scale of it until you’re standing on it.  My knees and I would like to report that there are 145 steps from the Pool up to the Memorial…and another 145 back down.  But the trip was totally worth it.  The Gettysburg address is carved on the left chamber and Lincoln’s Second Inaugural Address on the right.  I was struck by how moving both of those speeches are; they were artfully crafted and in language that is plain yet eloquent.  And most importantly, you get the sense that Lincoln labored over every word until it exactly reflected his beliefs and hopes for the nation.  A bit different from the “double speak” we hear today, written by professional speech writers and delivered via teleprompter.  When we walked around the perimeter of the monument,  Abby, a budding photographer, took the picture (right) that perfectly frames the Washington Monument in the distance.

Next up was the Vietnam Wall.  I’m not sure that anything can prepare you when faced with all of those names on the wall.  It is truly overwhelming.  I knew five boys from my small home town that died in that war.  Seeing their names carved in marble is something I will never forget.  I’ll write more about that experience in another blog.  We sat on a bench near the memorial to rest and plan the remainder of our day.  By this time I was exhausted (mentally and physically) so we ventured to the Reagan Commerce Building for lunch.  I eased myself down in my chair, every bone in my body aching and desperately in need of serious drug intervention.  Alas, I had forgotten to put my ibuprofen in my purse but Shelley saved the day by giving me some of hers.  I don’t think anything has ever felt so good as when those pills started to take effect.  So, now laced with pain-killing drugs, I was ready to go.  We decided to visit one of the lesser-known museums – the National Portrait Gallery.  It is a fabulous museum and, among other things, holds the most extensive portrait gallery of American presidents outside the White House.  I didn’t read the fine print on the information panel and took a picture with my cell phone with the flash feature on.  Apparently this is frowned upon and brought immediate action by the security guards.  I had visions of being hauled off to the hoosegow.  Luckily, they have seen hopelessly ignorant people before and gently told me to turn off the flash.  As if I knew how to do that.  I did notice that they followed me at close range for the rest of the day.

By the time we left the Gallery it was early evening so we headed for the Metro station and back to Bethesda.  I checked my pedometer when we got back to the room and was amazed to see that we had walked NINE miles.  No wonder I was moving like a hippopotamus in three feet of mud.  A break was definitely in order.  Abby worked on editing her photos, Katie went to the gym for a 50 minute run on the treadmill (because nine miles just wasn’t enough exercise), while Shelley and I exercised our arms lifting wine glasses in the bar.  That night I flopped into bed, took more ibuprofen, and prepared for the next day and my real reason for coming to Washington.

To be continued next week…