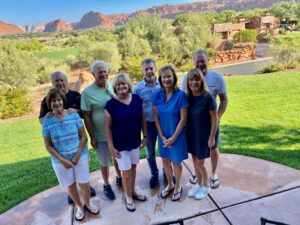 It seemed like a good idea at the time – getting out of the house and playing golf at some spectacular golf courses not too far away.  We thought our timing was perfect as it was just starting to cool down in ‘The OC’.  Unfortunately, it was heating up in places like Las Vegas and southern Utah, where we were headed to play.

So, the usual suspects, John & Judy VanBoxmeer, Jack and JJ Budd, Chuck & Linda Sager and Linda and I headed to Las Vegas, the first leg of our trip.  A lot of golfers brag about ‘shooting their age’, and that’s quite an accomplishment, but I’m going to brag about ‘shooting the temperature’ – which is not such a great accomplishment, especially when the temperature is in triple digits, but I did it!

There were only four of the eight that wanted to stop at an old haunt from our ‘Cinco de Mayo-Kentucky Derby’ weekend days, at the less-than-luxurious Primm Valley Resort.  Since moving from that venue to the South Point Hotel Casino & Spa and Rhodes Ranch Golf  Club, most of us had not been back to Primm Valley Golf Club in many years, so we decided to stop there for an 18-hole waltz down memory lane.  As it turned out, it was more of a waltz into the scrub brush and rocky desert terrain under a blistering sun on a less-than-pristine Primm Valley Golf Course. 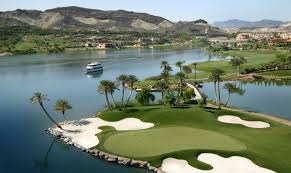 The following day we played at Reflection Bay at Lake Las Vegas, a development that began just before the 2008 recession and has never quite recovered. A lake in Las Vegas is an oxymoron – I was just a moron when I played it.  It was still very warm, no, it was hot, but I was able to ‘shoot my temperature’ although I was feeling a bit feverish at the time!  While I thought I had not been very lucky at golf, that actually turned out to be the luckiest part of my day, as I lost at black jack, craps, the slots and a bet I placed at the sports book on the New Orleans Saints – a quinella of loses.  Vegas did offer to will fly me out there for free any time I want to go!

Next stop, Wolf Creek, a course carved out of the rocky, rugged landscape of Mesquite, Nevada.  It is certainly one of the most spectacularly beautiful golf layouts in the country.  While it was still very hot, I kept reminding myself to enjoy the scenery which I did while again managing to shoot the temperature on a hot three-digit day.  We had a delicious dinner at Katherine’s, a great old-time restaurant in the Casa Blanca Hotel, a property originally owned by Merv Griffin. 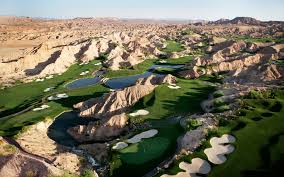 The next morning, we drove to St. George, Utah and stayed in condos at the golf course at Entrada.  It’s a very interesting course, on the front nine it feels like you’re in Sedona, as is surrounded by lots of beautiful red rock formations.  On the back nine it feels like you flew over to the Big Island of Hawaii, as it is carved out of a huge lava field, but the temperature reminded us that we were still playing golf on the surface of the sun!

We journeyed back to South Point in Vegas for the night, just to break up our trip around the sun, as well as provide me with an opportunity to visit my money.  Actually, the sun finally shone brightly on my craps game that evening, as opposed to beating down on my crappy golf game throughout the trip.  If you haven’t already learned anything from this blog, and you’re looking to do a similar trip – go in the winter! 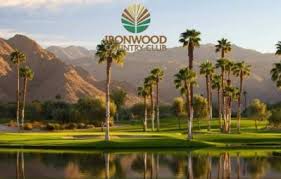 My formal introduction to the ‘treasures of the desert’ probably took place in the early 70s, when brother, Jack took a job as restaurant manager at Ironwood Country Club in Palm Desert and he invited me out for a weekend. I believe it was in March and I was teaching school in southern California at the time; I remember thinking as I made the drive to Palm Desert just how close the desert really was – only about an hour and half drive and yet, I was to find out, a world apart. And while the weather was certainly nice in Orange County in March, it was amazing in Palm Desert, especially the nights. I remember sitting out on a beautifully clear evening with a billion stars all around, wondering how long this had been going on – apparently for quite some time. 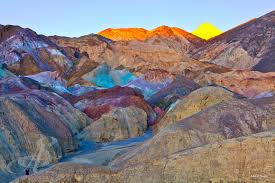 My love and fascination with the desert and its flora and fauna has continued to this day. I was amazed at the colors and the shear beauty of the desert on my first visit to Death Valley where I was also intrigued with ‘desert stories’ like that of ‘Scotty’s Castle’. My two treks through Joshua Tree National Park introduced me to unique rock formations, eerie hidden caves and spectacular views. My hike through Havasupai introduced me to the extraordinary water features in what was seemingly a dry, desolate desert. I recently visited the Desert Museum in Tucson with niece, Shelley Watson and continued to be amazed at all the beauty and life that exists in the Arizona-Sonora desert. The Raptor Show, featuring Ravens, Great Horned Owls and Falcons was remarkable!

Aside from the ‘family treasures’ in the desert, such as my sister, Suzanne living in Scottsdale and my sister-in-law, Starlet in Apache Junction, there’s a small oasis about three-and-a-half hours from home that calls to Linda a couple of times each year; you might know the place . . . Las Vegas. Linda has not met a Top Dollar slot machine that she doesn’t think she can hit the ‘big one’ on, so for her birthday each year, I ‘surprise’ her with a trip to visit our money. This year we did manage to salvage a little education out of the trip with an excursion to Hoover Dam, the building of which was amazing. 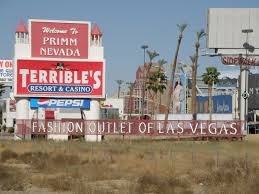 With all the hikes, excursions, timeshare in Palm Desert and trips to Vegas, you’d think I’d have my fill of the desert, but no, there is yet another pilgrimage that we make each year and from which I have just returned – Primm.

Primm, or what used to be called Stateline, is on the California-Nevada border, and at first passing you wonder why anyone would stop there with Vegas just 30 minutes away. The answer is Primm’s two 18-hole golf courses, which have a unique history of their own. Famous golf course designer, Tom Fazio, was contracted by Steve Wynn to design the golf course at the Wynn Hotel in Las Vegas, under the condition that he would not design another golf course in the state of Nevada. Thus, the two magnificent courses he designed at Primm are just over the border in California. 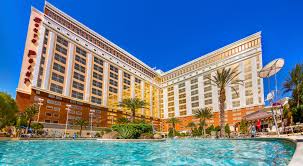 A group of 12 couples from Yorba Linda Country Club have been going to Primm on ‘Derby Weekend’ since 1996. The outing was originally put together by Debbie Osborne, who with husband Russ, still attend, along with two other original members, John & Judy VanBoxmeer and Don & Marilyn Spradling, who made the trip this year from their home in Fresno. Linda and I have been lucky enough to have been part of this ‘gang that couldn’t shoot straight’ for the last 12 years 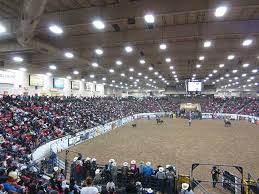 A small wrinkle in the Primm trip this year was, for the first time, we didn’t stay in Primm. While the golf courses are top quality, the Primm Resort & Casino would be lucky to get the tip of one star in a five-star rating. So, one of this year’s organizers, Chuck Sager, who has ‘connections’ at South Point Hotel & Casino in Las Vegas, suggested a change of venue. The South Point Hotel is very unique among Las Vegas hotels – it has 124 bowling lanes as well as horse stables and a full equestrian center, where, last weekend, many of us witnessed our first rodeo. It is truly an amazing place.  Thank you Chuck!  We also changed golf courses to Rhodes Ranch, another ‘treasure in the desert’. 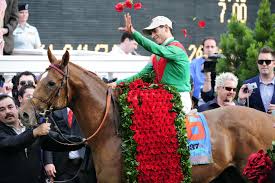 Sometimes a ‘winner’ is a ‘loser’

A tradition at this gathering is a large bet on the Kentucky Derby. We have two legitimate ‘pony players’ in the group, Jack Budd and Russ Osborne, so everyone gives them $105 and they make some sort of boxed, parlay, quinella bet to heighten our interest in watching ‘The Derby’. We actually won about $24,000 in 2011, of course it was split amongst 24 people, but still, it was a lot more fun than losing, or winning the way we did this year. Jack & Russ actually picked the top 4 finishers, but because they were mostly favorites, our $105 bet got us a $30 return, so ‘winning’ produced a $75 loss. But it was exciting for a moment, before we realized that winning was actually losing – more mysteries of the desert!

Whether I’m hiking, exploring, golfing or just losing money, the desert continues to lure me to its hidden treasures.