I am ending this very strange year with the inaugural From A Bird’s Eye View people of the year award.  No, it’s not as prestigious as the award from Time magazine, but I believe our nominees are more fitting.  The poem is one I came across a few years ago and my hardest task for this post was narrowing down the nominees who best represent it.  I’m sure I’ve forgotten many groups of people but for all of those who have worked during perilous times this year, we want to express our thanks for your unwavering strength throughout 2020.

There are always angels everywhere.

Perhaps we only think to look for them at Christmas,

When their wings can be seen and their halos glow with light.

But they are always there.

There in the quiet corners,

there in the shadows,

there in their ordinary clothes,

and they are beautiful.

Make room for the angels, for they will catch you unawares and fill your heart in ways you never could imagine.

Speaking of angels, our dad was certainly one on Earth and I believe he continues to watch over our family. One of Pop’s hallmarks was the Ice Cream fizz he served every Christmas morning.  Oh sure, most families had hot chocolate and cider while we were drinking gin, but don’t judge – it has given a roseate hue to many a Christmas morning.  So this year we are once again sharing his recipe so that you and your family might also enjoy this wonderful tradition.

My brother Bob adds an egg so the white adds some froth, brother Jack doesn’t add an egg.  Personally, I’d add it just because you can then claim it’s a protein drink.

Just blend it well and – voila – you have a concoction sure to put a positive spin on everyone and every thing!

Our mom served them in a wine glass with a dash of nutmeg.  As we got older we would conspire with Pop and ditch the wine glass for a chilled beer mug from the freezer. Saved having to go back for seconds…or thirds.

Bob and I wish you and yours a very Merry Christmas.  We know for many of you it may be quieter, but hang in – 2021 is sure to be a better year.

In the spring of 1957 a housing development rose like an oasis in the field across from our parent’s home.  Twenty mid-century homes were built, complete with aqua appliances and pink tile bathrooms.  I was the only girl under age 10 in our neighborhood so I anxiously awaited their completion, hoping that a girl would move in. 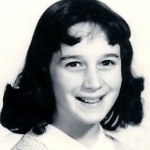 For months I watched new families arrive in the neighborhood, but, alas, there were no girls in sight.  Then one summer day a 1956 Studebaker station wagon pulled into the driveway at 48 Madeline Court and it was filled with children.  I dashed over to the car and saw a girl my age.  She was leaning out of the rear window so I ventured up and introduced myself to the person who would become my lifelong friend … Leslie Sherman. She seemed friendly enough, explaining that they had driven across country from New Jersey.  Then she suddenly whipped around, picked up a small bar of hotel soap and asked if I’d like to buy it for a nickel.  Would I???!!!!  I was so excited to have a potential friend move in right across the street that I would have paid a whole dollar!

Before I could fish a nickel out of my pocket, Leslie’s mom discovered her daughter’s entrepreneurial scheme. Naturally, she was mortified that the Sherman’s introduction to the neighborhood consisted of Leslie hawking free hotel soap to anyone foolish enough to buy it.  Like me.  But that first transaction, when we were both 7 years old, became the basis of our friendship.  We laughed about it in almost every conversation for the rest of our lives; I always chastised her for trying to swindle me, while she chided me for being stupid enough to actually pay for free soap.

Despite that rather shaky beginning, from that moment on we became fast friends.  Each day on our half-mile walk to school and back we shared secrets and plotted adventures.  In retrospect, we really couldn’t have been more different. She was as bright as a penny, excelling in every subject.  Let’s just say … I did not.  Social skills, however, were not her strong suit, while I was gregarious and outgoing  She liked cats, I liked dogs.  She was a Camp Fire Girl, I was a Girl Scout. My idea of a fun game was paper dolls; she liked to play in the dry creek bed with bugs. She was book smart, clear-headed and logical; I was street smart, emotional and impulsive .   But somehow, it just worked.  I think we both admired in each other the traits we didn’t possess.

We became inseparable, sharing all the silly things that young girls do.  The high point of every Saturday was getting our twenty-five cent allowance and walking a mile to the Five and Dime at Nave Shopping Center.  We would spend an hour poring over our choices of candy bars and comic books.  Even there we differed; she would read about the adventures of Superman and I would laugh with Archie and Veronica.

As pre-teens we enjoyed our annual summer trip into San Francisco with her dad.  He would take us to lunch at the Cathay House in Chinatown and then to Blum’s on Union Square for hot fudge sundaes.  Looking back, his tolerance knew no bounds, for in later years he also took us to Peter, Paul and Mary concerts in the City two years running and patiently waited for us in the car while we listened to what he referred to as “yowling”. 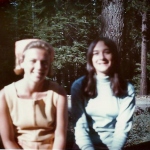 1967 – the year of the Vietnam discussion at Tahoe

My parents took her on every family vacation to Lake Tahoe, where we made memories in sunshine and snow.  We loved it when my parents would go out to dinner and leave us at the cabin with Swanson’s TV dinners and a television set with rabbit ears that got ONE station from Reno.  We would lie in bed, watching that old TV and laugh until our stomachs hurt.

As we got into high school we accumulated more friends, but never to the exclusion of each other and her trips to Tahoe with our family continued.  In the summer of 1967 we were on the beach in Tahoe City (Leslie reading TIME and me perusing Seventeen) when two boys wandered over.  I was thrilled – until Leslie launched into a discussion of the Vietnam War, the “domino theory” and stemming the tide of communism in Southeast Asia.  Needless to say, the boys were quickly overwhelmed and made a speedy exit. I just shook my head – there was no changing her.

Later that year she suffered injuries that would plague her for the rest of her life.  She was spending the night at my house, listening to the Beatles and eating junk food.  We ran out of potato chips and TAB so she decided to walk to the corner store for more provisions .  When too much time had passed and she hadn’t returned, I ran down the block.  The street was cordoned off  and police lights were flashing.  She had been hit by a car, catapulting her into the windshield, injuring her head, back and hips.

After high school we went off to college and our paths varied.  As the years passed, we both rounded off our edges.  She became more social and I became smarter.  We both had good careers and were lucky enough to work in San Francisco and would occasionally meet for lunch. Without fail, we always contacted each other on birthdays and at Christmas.  Although we didn’t see each other often, we kept up enough to know what was going on in each other’s life. 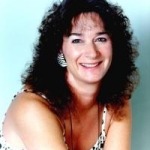 Last August, she called on my birthday only to discover that I had chickenpox.  She burst out laughing – “How could you not have had them when I did?  We were together every day!”  She made me laugh too, just listening to her hearty guffaw. She updated me on her recent activities – she was full of plans for the future.  Then she began to reminisce about the good times of our childhood.  For some reason, she just needed to talk that day.  We spent more than an hour on the phone, laughing and remembering. I am grateful that we each ended the conversation by saying “I love you”.

Because on November 21, suddenly and without warning, she died of a massive internal infection.   I did not find out about it until last week because, true to form, the passwords to the address book on her computer were in Greek and Latin.  I have had a difficult time reconciling myself to a world without her in it. Certainly it is a dimmer place without her dry wit, keen intelligence and loving nature.  Personally, my life will now be different.  She was the touchstone to my childhood, the only person with whom I could share memories about the neighborhood, our teenage pranks and our early hopes and dreams.

I’ve made a lot of friends since that first fateful meeting in 1957, but no one ever replaced my first best friend.  Now she is gone and the space in my heart where she once resided is empty. I take solace in knowing that she is free of pain, undoubtedly somewhere hawking soap to the unsuspecting masses.  And laughing.  Definitely laughing.