As much as I enjoyed the care I got at Hoag hospital following my knee-replacement surgery, I was not looking to return to that venue any time soon.  That plan was working up until about two weeks following surgery.  The knee was healing nicely, but I wasn’t feeling so good – fever, chills, vomiting, rapid heart rate.  So, Linda took me to a Hoag Emergency Center, where they took my temperature (103), my heart rate (140), blood pressure (off the charts either high or low, I don’t remember) and they looked me in the eye and said, “You’re sick!” 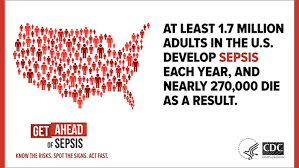 So back to Hoag Hospital I went – diagnosis: Sepsis. I really didn’t know much about Sepsis, but as I Googled it, I became more alarmed – it’s serious!  Infected kidneys and a urinary track infection were causing significant blood problems.  I was started on an antibiotic, but was told that a blood test and analysis, which would take about 48 hours to complete, was needed to find the specific antibiotic to fight this serious infection.  So, for two days, I was on one antibiotic and when test results came back, I was switched to another antibiotic for the next two days.  Neither seemed to knock the Sepsis out, so a third antibiotic was tried.  Whether it was a combination of all the antibiotics or the elevated white blood cell count that was fighting the infection, eventually the fever went away.

After five days in the hospital, I was finally released.  I felt like I was getting out of a prison camp where I was being tortured via sleep-deprivation techniques.  Other parts of the torture were, day-time TV which included a constant barrage of bad news.  Before leaving the hospital I was given a ‘mid-line’, which is a port in my arm so that antibiotics can be administered at home – which continued for another six days.

Now that I’m home, I have ventured all the way out to the end of the driveway, so I’m hoping future blogs will be a bit more interesting.

Thank you to those sending prayers and well-wishes my way – much appreciated.

33 comments on “Imprisoned at Hoag – Epilogue”