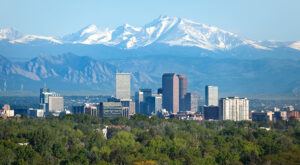 Two weeks ago my husband and I packed up for our first road trip in two years.  Not just any road trip…a trip to see our family in Denver.  COVID has taken a big hit to family gatherings for everyone and we were no exception.  So while we were very excited to make this trip, we discovered that we were woefully out of practice in preparing for it.  I recalled that old adage, “take half as many clothes and twice as much money as you think you’ll need”, and then totally ignored it.  I could have been away for months given the clothes I brought along.  Oh well, at least I remembered the important things like Dash the Wonder Dog’s food and  plenty of oatmeal cookies.  Oatmeal cookies are a must,  They not only serve as a treat, but in a pinch they can fill in for breakfast.  As with most of our long trips, we rented a car so as not to put wear and tear on ours.  This time we got a Nissan Armada with enough cargo space to move an army.  We filled every inch of it. 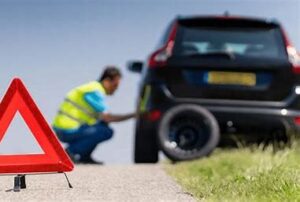 Our first day we drove to Santa Fe.  Not the artsy, fabulous, interesting part of Santa Fe, but a Hyatt Place hotel near the freeway next to a gas station.  Importantly, there was no restaurant within walking distance and we discovered the hotel no longer stocks any food.  We settled on an Uber Eats delivery from Applebee’s that was pretty much inedible.  After a very long day (and plenty of oatmeal cookies to tide us over), we crashed.  The next morning we took off, stopped for gas and a Starbucks, and hit the road.  We were a half mile down Highway 25 when the tire pressure indicator popped on.  The tire pressure indicator on any car can be wildly inaccurate, but we were just starting a 400 mile trip, much of which is through pretty desolate country, so we didn’t want to take a chance. We stopped at two gas stations for help but the best they could offer was a Slurpee.  We finally drove to the rental car office, where they told us they were out of cars so they couldn’t give us a new one.  They directed us to the local tire store.  A very kind worker checked the tires, filled them all, and sent us on our way.  Luckily, we made it to Denver without incident. 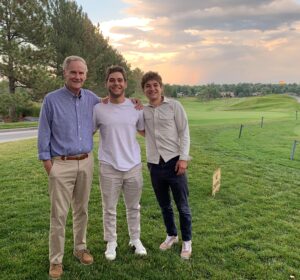 We had a wonderful time with family.  What did we do?  Pretty much nothing – and that was perfect.  We have seen all the highlights of the area on other trips.  This time, we simply wanted to enjoy the time with family after such a long time apart.  COVID has been, and continues to be, a challenge but one of the silver linings is that it has honed our appreciation for the more simple things in life.  Being able to talk with our grandsons and catch up on their lives and plans for the future was pure joy.  As you can see from the photo, my husband was in Heaven with his two boys.

The trip was all too short and soon we were packing up for home.  Just as we finished loading everything in the car, our son-in-law decided to check out the tires just to make sure they were safe.  They weren’t.  There was a nail stuck in the right rear tire.  Long story short, he drove the car to the Denver airport, transferred all of our stuff to a new car, and came home with a large Infiniti SUV.  It’s only July, but he has already won the 2021 Son-In-Law of the Year award.  The next morning we drove to Cedar City, Utah.  Yes…that is a roundabout way to get to Scottsdale but the drive through the Rockies is so beautiful we decided to take the long way home.

Finally, on our last leg of the trip, we embarked on the 430 mile trip home.  We were feeling pretty lucky.  We had not run into any bad weather or freeway construction – a miracle when you’re traveling in the summer months.  Fifteen miles from home my husband decided to stop and get a bit of gas.  As we pulled out of the gas station the car started to sputter.  We made it out onto the Carefree Highway and it began lurching and making a sputtering sound that I’m not sure a car is supposed to make.  My husband was able to steer it over to the side of the road, whereupon it promptly died.

So, there we were, in 101 degree heat, no A/C and Dash the Wonder Dog in the back seat.  Luckily, we were still within walking distance of the gas station and it was attached to a small convenience store.  The kind manager took us in and even allowed Dash to enter her “no dogs allowed” establishment.  You gotta love people who take care of dogs.  I called the rental car company and they said they we were too far out for them to come get us.  I begged him not to abandon us to the vagaries of a towing company.  He finally relented and 40 minutes later showed up with another car.  He helped us transfer everything to the new car while he waited for the tow truck to take our ‘dead’ car away.

A half-hour and three cars later we arrived home – it has never looked so good.  It was great to be away but it is also great to be home.  The lure of the road has somehow lost its appeal.  We’ve cancelled our road trip for August and will wait until September to take our annual trek to Sun Valley, Idaho.  We’ll be driving our own car.