First, let me thank all those who have sent prayers and good wishes for me in my fight against Sepsis or whatever other infections have decided to take up residence in my body.  Thank you so very much! 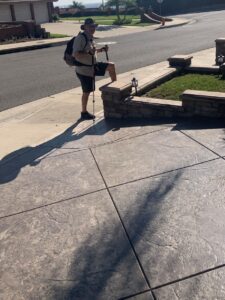 As you might suspect, the scope of my travels have been a bit limited lately, but in my quest to circle the globe for adventure, I felt compelled to start over with baby steps.  I had previously mentioned that my first travel goal was to put together a trip to the end of my driveway.  Well, I’m here to tell you – mission accomplished!  As the attached photo shows, I have indeed summitted my driveway.  How long it took me to overcome some of the obstacles along the way is immaterial.

With the ‘driveway’ box checked, I was looking for further adventures, while realizing my limitations, I was looking for something not too challenging.  I then came across an article in the local newspaper that seemed to have my name all over it.  The headline read, ‘DONUT MUSEUM OFFERS VISITORS A SWEET TIME’.  Yes, that was roughly the kind of adventure I was looking for – a local doughnut museum – nothing too hard, but with a bit of whimsy.  Having never been to a doughnut (I choose to use the proper spelling of the word) museum, I thought, “what an adventure!”  It so happened that we had two of our grandchildren with us, Addison and Macklin, so with the grandkids in tow, Linda and I headed off to the Westminster Mall to visit the ‘Donut Life Museum’.  Not sure where the ‘Life’ comes in, but I suppose it’s better than the Donut Death Museum.  Addison remarked that she had never been to a museum before, and being a fan of doughnuts, she was really looking forward to sharing this adventure with me. 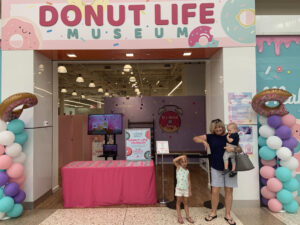 Addison, Linda & Mac giving it the ‘thumbs down’

I related some facts to our group that I had gleaned from the newspaper article that morning, to wit; Kathy Ly, along with cofounders, Alix Luu and Brian Ross “wanted to create an experience that allows visitors of all ages to connect, spend quality time and make memories”.  The goal of the museum is to be uplifting, with exhibits such as the “Donut Forget Life is Limitless” and “Love Makes the World Hole”.  The article also mentioned that at the end of the visitors’ experience, everyone gets a Krispy Kreme donut.

We arrived at the ‘Donut Life Museum’ and I told the girl at the entrance that we’d like to see the museum, as I looked in and saw that it was both empty and cheesy.  She said, “OK, it’s $25 per adult and $17 for each child.”  Once I picked my jaw up off the floor, I said, “So you want $87 for us to wander around in a room with some pictures of donuts hanging off the walls?”  She said, “It’s interactive”.  I didn’t bother to ask her what that meant, as we turned and walked away looking for the closest ice cream parlor.

Back at home, I wanted to get a clearer picture of exactly what the ‘Donut Life Museum’ had to offer and what we missed out on, so I searched YouTube and found that we made the right decision by opting for ice cream over doughnuts.

Here’s some examples of the adventures one can have at the Donut Life Museum. 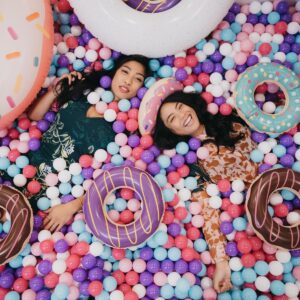 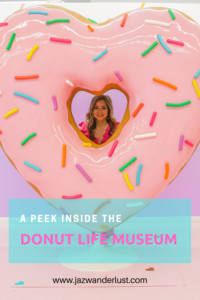 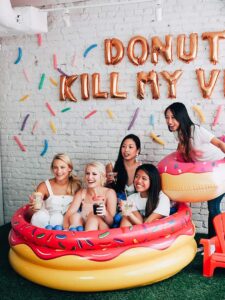 If, after reading this, you’re getting that ‘doughnut vibe’, save yourself $87 and just go to Krispy Kreme and buy one . . . or more.

16 comments on “Driveways and Donuts”