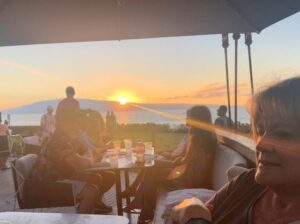 Sunday: We arrive on Maui in the afternoon and had made dinner reservations at one of our favorite restaurants on the Kaanapali strip, the Hula Grill – right on the beach, feet in the sand, and one of the best ribeye steaks I’ve ever had.  I know I’m supposed to eat fish here, but this was too good to pass up. 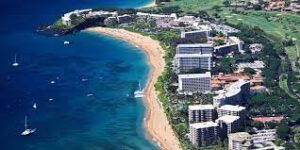 Monday: Stroll the ‘Kaanapali Strip’ seeing who has the best Mai Tais – started small umbrella collection.  Got in front of a TV early enough to watch the Alabama-Georgia championship game.  The game was over by 6:00 Hawaii time, so went to dinner at Monkey Pod, right behind Hula Grill.  Yes, I had fish . . . tacos! 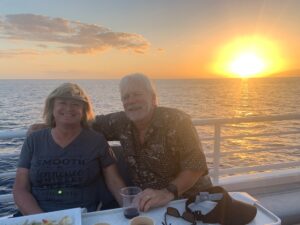 As promised, a sunset and dinner on our sunset dinner cruise

Tuesday: Golf at the Kaanapali Royal Golf Course on a perfect day then a sunset dinner (fish) cruise – seeing lots of whales and a beautiful sunset.  After the cruise we wandered Front Street in Lahaina and settled in at an upstairs bar called Captain Jack’s.  We sat at the upstairs bar next to two guys from Rhode Island; one of them got up to go to the restroom and while he was gone, a restaurant employee came by and asked if anyone was using his bar stool.  We said yes, but he took the stool anyway.  When the guy returned from the bathroom, he was surprised that his seat was gone and asked what happened.  We told him and he looked around for an empty stool, found one and threw it off the balcony onto the street below and walked out. 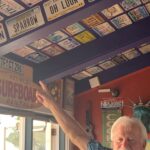 A Sparrow on the ceiling

Wednesday: Free day, no golf, no tours, but still mai tais!  Drove north up to Kapalua and Napili, had liquid lunch at Duke’s.  Back to Lahaina, strolling Front Street, stopped at Cheeseburger in Paradise where I found my name on the ceiling. Continued on for dinner at The Lahaina Fish Company, yes, we had fish!  Then we went to Warren & Annabelle’s Magic Show and saw two great acts – John George, who was a great magician and pretty funny, and Chris Blackmore who was a good magician and very funny.  A very fun evening! 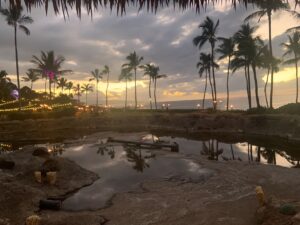 Thursday: Golf at the private course, King Kamehameha Country Club, awesome golf course and another perfect day.  The club house was designed in 1957 by famous architect, Frank Lloyd Wright, although he originally designed it as a house for Marilyn Monroe (long story).  Today, as the solitary structure on the hill, it looks like the start of a lunar colony.  After golf, we continue south to the Grand Wailea restaurant and my favorite bar in the world, Kumu Kumu (real name Kumukumunukunukuapua’ha – it’s a fish!).  I had a fish with a shorter name, Linda had a $100 ribeye, and said she should have ordered the fish! 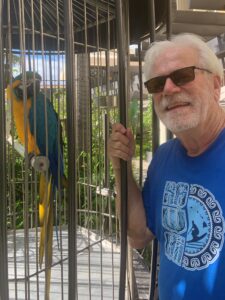 Bob looking good. No, not me, the parrot’s name is Bob – he kept calling out my name, or was he calling out his name? 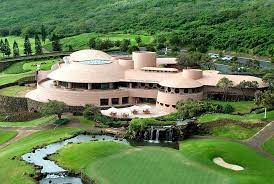 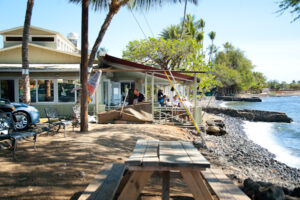 Breakfast at Mala Ocean Tavern. We were so close to the water we got ocean spray in our coffee

The trip was too short, but sweet – sorta like many of my Mai Tais! 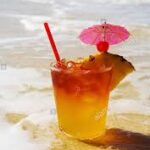