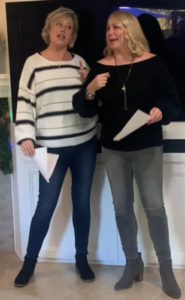 One of the many benefits of starting a new year is that we don’t have to listen to any more of those tired old Christmas songs that have been ear worming us since just after Thanksgiving, maybe even before.  Although, I have to admit that I did hear one song this year, for the first time, a week before Christmas that had rather an unusual effect on me.  While driving home from Las Vegas, listening to the radio, I heard the song ‘An Old Time Christmas’ by George Strait.  When the song finished, I was welling up, which I tried to hide from Linda, who was sitting next to me, by adjusting my dark glasses.  My Sirius Radio gave me the ability to replay the song, so I did, as I was really curious as to what specifically about that song got to me.  So, I played it again – same results.

When I got home, I decided I wanted to learn this song that had such an effect on 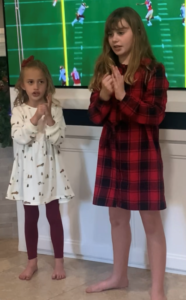 me, so I picked up my guitar, printed off the music for the song, and started to learn to play it.  I couldn’t get through it without choking up.  I’m thinking, ‘What the heck is going on?!!’  I assumed that because the song was about Christmases of the past, that that cued me to think of my Mom and Dad and Christmases with my brother and sister when we were growing up, as well as Christmases when our own kids were growing up.

Fast forward to this Christmas Eve, when we entertained my brother, Jack and wife Sharon, my sister, Suzanne and husband Alan, as well as all of our three kids and their spouses, Stephanie and husband Jason, Dana and husband, Joe and Jeff and wife, Pam; as well as all four grandkids, Dylan, Emma, Addison and Mac.  Also coming by on Christmas Eve was Alan’s daughter, Wendy, her husband, Steve and their college-student kids, Matt (USC) and Jake (Colorado) – it was one of the few times we had everyone there for Christmas.  It was an awesome family gathering. 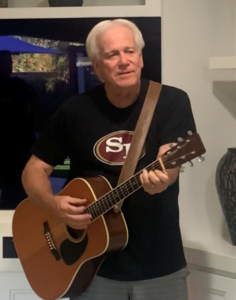 When I said we were entertaining this group, I really meant entertaining.  In front of the group, Emma and Addison did Jingle Bells, we sang it and they did the sign language.  Emma, Addison and Mac sang Rudolph the Red Nosed Reindeer.  I did sing An Old Time Christmas, although not very well;  I mentioned when introducing the song, that the kids gathered here today would remember this day as their Old Time Christmas.  Dylan, who at age 12, is quite an accomplished piano player, played Greensleeves.  Ironically, the person in our family with the best voice, Jeff, didn’t get a chance to sing – next year!!  Without question, the highlight of the entertainment was sisters, Stephanie and Dana doing their rendition of Sisters, from the movie, White Christmas.  Classic!!!

I would have to say that it was the best Christmas Eve, maybe ever.  Linda and I feel so very fortunate to have such an amazing family.  We’re hoping you all had a happy and Old Time Christmas as well.

4 comments on “An Old Time Christmas”