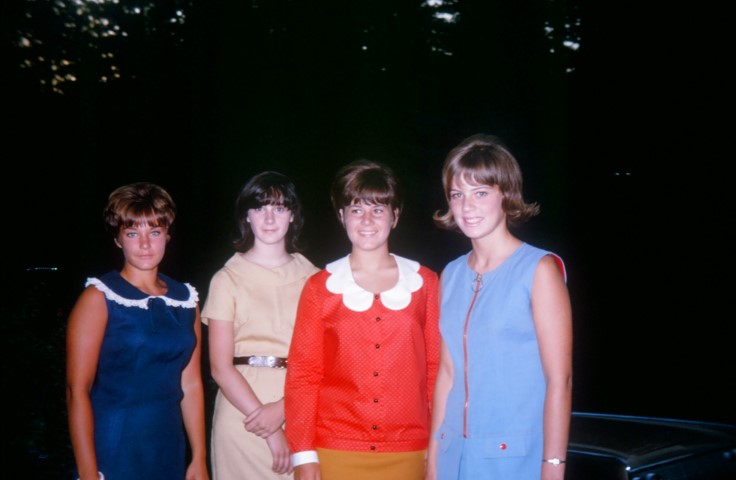 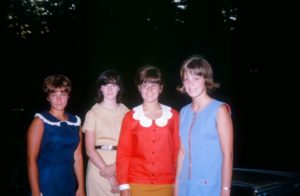 Me, my cousins and best friend in our ’60’s garb

In 1964, the night before my first day of high school, I spent hours agonizing over what I was going to wear on that inaugural day.  Back then we strived to look like the impossibly perfect girls we saw in Seventeen Magazine.  So when I realized I didn’t have a purse to match my shoes I went into panic mode.  Yes, it was that important.   Luckily, my cousin who lived around the corner came to the rescue and I was saved from the humiliation of mis-matched shoes and purse.  We lived with pretty strict rules back then.  Girls could not wear pants to school, not even culottes (I know because I was almost sent home one day for wearing them), and jeans were totally out of the question. Skirts could be no more than one inch above our knees.  Sleeveless dresses were about as risqué as it got.  Looking back, we were so covered up most of the year that we came darn close to resembling Mennonites.

Towards the end of my high school career the “mod” era of fashion changed a lot of what was acceptable – or not – at our school.  Skirts inched up and up until it became dangerous to bend over.  Jeans, as long as they were clean, were allowed for boys.  Fabrics were brighter, white boots were the epitome of high style and hair grew longer on both sexes, although boys were still not allowed any sort of facial hair.  Still, with all the changes, there remained a norm of looking nice to go to school.  Over the years, of course, dress codes at schools have become looser and looser, almost to the point of seemingly having none at all.  Baggy pants with underwear showing, micro shorts, bare bellies – they’ve all become  de rigueur at our local high school.  Dress codes have been in the news a lot since school started up again this year.  Some principals are cracking down on sloppy and “barely there” attire, while others are going in the other direction – let the kids wear whatever they like. 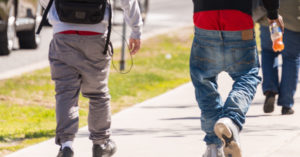 Would you hire these butts?

It was with this in mind that I read with interest in USA Today that one high school district in the Bay Area is doing away with dress codes and have replaced them with general guidelines.   Here’s what is listed as what students MUST WEAR:  bottoms, tops, shoes, clothing that covers genitals, buttocks and nipples.  Seems like that’s a mighty low bar.  The policy goes on to say that they CAN wear midriff-baring shirts, pajamas and tube tops.  The only items forbidden are those that contain hate speech, profanity, pornography, etc.  The intent of the policy is to prevent shaming, specifically for girls.  In fact, the school district has said they reject the notion that bodies are distracting and therefore must be monitored and covered up.  Really?  They work all day around teenagers with raging hormones and they don’t think bodies are distracting?

I’m not suggesting we go back to the early ’60’s but I’m sure there is a middle ground to be reached.  Clothes can take on way more importance than they warrant at that age so relaxing standards a bit seems logical.  But I will say this:  as a former HR executive I can attest that appearances do matter.  Teaching our kids that they can wear whatever they want, whenever they want, does them a disservice.  Even at the high tech companies there are standards – no pajamas, for example.  The real world requires some amount of “dressing for the occasion” and, further, there are studies that show there is merit to the “dress for success” mantra.  Unless a kid’s ultimate career involves working in their parents’ basement, in which case all they’ll need is their pajamas and fuzzy slippers.

2 comments on “UN-DRESS FOR SUCCESS”