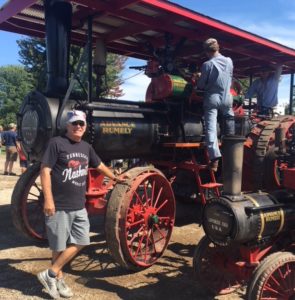 The Andy Griffith Show was one of my all-time favorite TV programs and last week I got a chance to spend some time on the set of that show. At least it seemed that way. All you need to do to confirm that ‘Mable-Hesper Steam Engine Days’ is something out of Mayberry RFD is to check out the agenda items for this year’s event: 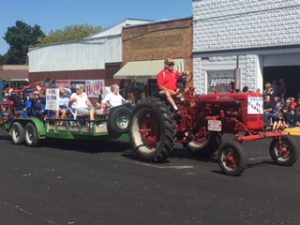 While this alone would have been enough to get us back to Minnesota, the real impetus was Linda’s 50th high school class reunion. There were a total of 48 members in the Mable-Canton Cougar class of ’68. The town of Mable had 780 people, Canton 342 in the 2010 census. In fact the towns are still so small that the reunion took place in a winery just across the border in Iowa; yes, a winery in Iowa – rows of grapes surrounded by rows of corn.

If the expectation for the reunion was that I was going to be surround my a bunch of country bumpkins that I didn’t know or cared to know, that couldn’t be further from the truth.  This group, mostly women (there were only 3 men from the class in attendance) were not just friendly and ‘Minnesota nice’, they were a group of sophisticated, educated and accomplished women.  After supper (dinner is served at noon don’t cha know) there was an open discussion amongst the group as to whether they felt disadvantaged attending a small, rural school in southern Minnesota.  The response was an overwhelming ‘No!’  In fact they made it abundantly clear that they felt privileged to attend a school where they could not only participate in clubs, student government, band, athletics and virtually everything that went on at the school, but were encouraged to do so because the school was small.  A stark contrast to today’s students who, in order to succeed, typically do one thing all year long. 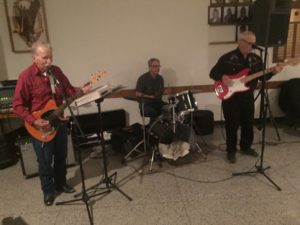 After the reunion many of the classmates, including us, headed for the dance at the American Legion Hall in Mable, after all it was Steam Engine Days and everybody was in town and in a party mood. The Legion Hall is a large facility with two big rooms connected by a bar. One side had the Buck Hollow Band and a huge dance floor, filled with old and young alike, while the other side was a ‘sports bar’ with TVs, pool tables and folks just having a beer and shooting the breeze.  I wish I had a picture to show you how great this felt just being in this environment.

I drove Starlet’s, my sister-in-law, car to and from the reunion and Steam Engine Days, and I have to tell you, it was quite an experience. During the day the narrow roads lead you through a vast rolling pastoral landscape of corn fields dotted by pristine farm houses and silos – it is truly amazing. At night, a different story. There are no street lights, in fact there are not any lights, so driving these dare, narrow two-lane roads becomes a significant challenge. When was the last time you were constantly clicking your high beams on and off? While on one of these winding roads going from the reunion to the dance, I was suddenly confronted with a deer crossing the road. I slammed on the brakes and swerved as much as the narrow road would allow me and the deer turned slightly so I just grazed him as one of his antlers put a small scratch on the car door – Sorry Starlet! That doesn’t happen much in Orange County. 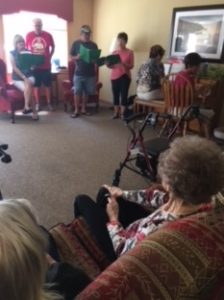 One afternoon we sang at a Memory Care Center for Alzheimers and dementia in Rochester, MN.  There were about 20 senior residents sitting and listening, many singing along with us. When we were finished, an older gentleman wearing an Army Veteran ball cap, motioned to Linda to come over. She walked over to him and he looked her in the eye for a long time and finally said, “Is that you?” Linda, not wanting to ruin the man’s illusion, replied, “Yes”. He said, “How have you been?” Linda responded, “I’m good, how about you?” “Good now,” he said, with tears in his eyes. We assumed that he must of thought Linda was either his wife or daughter. Linda asked him if she could give him a hug. He happily agreed. We left with gladden in our hearts, smiles on our faces and tears in our eyes.

22 comments on “A Weekend in Mayberry”