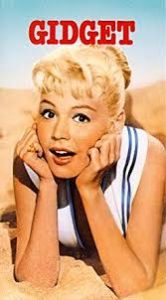 As a native Californian, I was of course attracted to surfing at an early age. I think it was in 1959 when the first Gidget movie came out – OK, so maybe I wasn’t attracted to surfing as much as I was  attracted to Sandra Dee! I figured if MoonDoggie could get a girl like that by surfing, sign me up. But I was raised in a rural dairy community in northern California where surf is rarely up on the surrounding farms and ranches.  I will say that the iconic 1964 movie, Endless Summer, had some appeal to me as someone who’d been going to school for most of my life – I thought I was starring in the movie, Endless School. Even a move to southern California, or as my northern friends say, ‘the dark side’, didn’t get me interested in surfing, but I did feel closer to Sandra Dee.

Why then am I writing about surfing? Two reasons: 1) it’s only about a 20 minute drive from my house to surfing mecca, Huntington Beach or as it’s know to board riders, ‘Surf City’,  where the National Surfing Championships are held every summer, but more importantly (to me) it’s the home of my favorite restaurant – Duke’s!  2) I thought I would start an educational series on various museums in southern California; although after this trip to the ‘International Surfing Museum’, it may be a series of one, and not very educational at that. 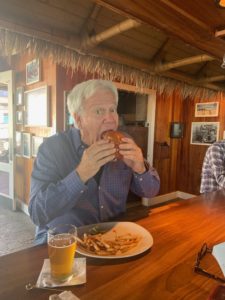 It was an unusual rainy May morning when I started my safari to Surf City, but those are the kind of days that keep people away from the beach, so I was happy for a little precipitation as I headed to the coast.  Before I hit the museum it was a must to get a burger and beer at Duke’s, which I enjoyed as I watched the surfers and volleyball players warming up for summer. The ‘International Surfing Museum’ is just a short walk from Duke’s down palm-tree-lined Main Street, which is bar & grill after bar & grill after bar & grill, with a Hawaiian-vibe. It wasn’t very crowded on this midday Thursday, but guaranteed it’s wall-to-wall during summer.

The museum is not large; in fact the space was an old doctor’s office and I’m guessing the doctor didn’t have a very large practice. The door was open, so I walked in and was greeted by Judy, the docent, who told me the museum was closed. I had just walked through the open door, saw the lights on and brochures out on a table and said, “It doesn’t look like you’re closed”. She said, ‘Well, we’re open, it’s just that we don’t have an exhibit up now” as she motioned to the adjacent vacant space. She encouraged me to take a look around and check out the surfing posters, the surf boards in the rafters and . . . the surfing posters. She gave me a quick history of surfing, starting with Duke Kahanamoku and continued to regale me with the 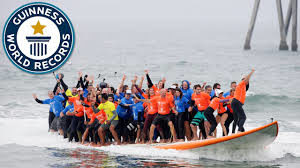 upcoming surfing events of the summer. I feigned interest for as long as I could and then told her I wanted to get a photo of the Guinness record, largest surfboard in the world, which held 66 people and is hanging on the outside of the building next to their parking lot. It’s gnarly!

I drove home still relishing my burger and beer from Duke’s and having assuaged my guilt of living so close to the ocean and never hanging ten, or even one. But, hey Dude, it was still a bitchin’ day.