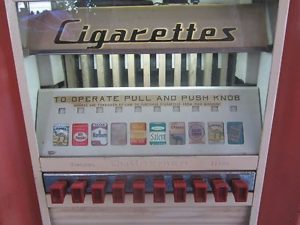 I was watching “Fosse/Verdon” the other night on TV (well worth viewing) when I spotted something I hadn’t seen in a long time – a cigarette machine.  Until that moment I hadn’t thought about those instruments of death, once so ubiquitous but now almost extinct.  I can’t remember the last time I saw one.  Clearly the ban on smoking in restaurants and bars was the death knell for them, but seeing one evoked fond memories.  I used to think it was great fun when my dad would give me a quarter to slip into the slot and pull the lever to magically produce his Salem cigarettes.  Of course, back in the ’50’s we had no way of knowing it would eventually lead to his emphysema, but then again, he lived to age 87, most of those years smoking cigarettes and drinking martinis so he had a pretty good – and fun – run. 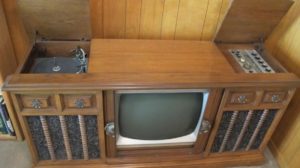 Seeing something once so prevalent got me to thinking about other items that simply don’t exist any more.  For instance, console TV’s.  I recall getting our first console – maple! – and it taking a prominent position in the family room.  It was considered a piece of furniture, needing to be polished and waxed just like the dining room table.  The picture was always just a bit blurry and we often had to adjust the antenna on the roof, but it beat the green screen we’d had before.  In the late ’60’s my parents splurged and bought a combo console – TV, record player and radio all in one!  In was a behemoth, and I’m sure the sound quality on all three components sucked, but it was a proud possession of my mom until she moved to a retirement home in 2010.  Talk about getting your money’s worth! 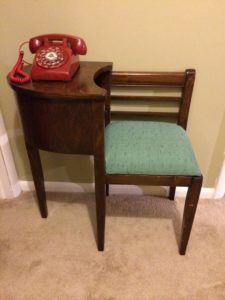 Although land lines are not yet extinct, they have changed considerably from my teenage years.  Typically they were mounted on a wall or sat on a “telephone table” with a very short cord.  Personal conversations – so critical to any teenager – were impossible.  Where today’s kids beg for a cell phone, my only desire was for my parents to buy a long phone cord.  By exchanging the short cord for the long one I could pick up the phone and take it into my room, close the door, and have all my angst-filled conversations in private.  That said, when we still had the short cord Brother Bob overheard me one day fumbling for a way to turn down a date.  After I hung up, he told me, “Sis, what you say is, ‘I have other plans that night’.  That could mean anything from a date with another guy to washing your hair.”  I have used that line all of my life to gracefully turn down an unwanted event.  So I guess there were advantages to the “family” telephone.  The other advantage is that we didn’t carry it around, ignoring the world around us, or talk on it when we were driving. 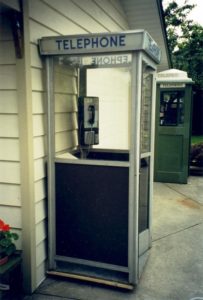 And while I’m on the subject of phones,  here’s something else you don’t see much anymore – phone booths.  I remember when they were literally on every corner and were an oasis if you needed directions, were running late or simply needed privacy (for those who had short cords).  Kids today don’t realize how easy they have it when they get stuck in traffic on their way to an appointment.  They simply power up the cell phone and call the person to update their status.  We used to frantically search out a phone booth, often times pulling off a freeway in a strange neighborhood or, as I did once, walk a mile to find the nearest phone.  To compound the problem, once you found a phone booth you had to pray that you had the right amount of change in your pocket.  Nothing was worse that placing a call and having the operator (a real live person) tell you to insert 35 cents when all you had was a quarter.  I remember when the phone companies came out with calling cards where you could charge a call to your home phone.  We thought that was the height of technology.  Little did we know that decades later we would be living in a Jetson’s world with a hand-held device that would place calls, display maps, alert us to traffic jams and publicize our outing on social media. 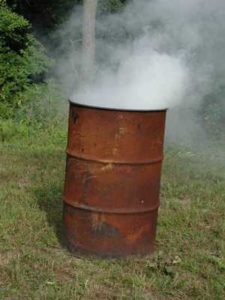 Finally, something not everyone had but we did – a burn barrel.  It was a rusted-out 55 gallon oil drum that was re-purposed into burning leaves in the back yard.  Each fall my dad and his best friend Dick would spend several hours in our yard raking all the leaves into piles.  They would break for lunch and then spend the afternoon shoving all the debris into the burn barrel.  Of course, such strenuous work required a beer so I have wonderful memories of them laughing and burning leaves, almost like two kids playing a fun game.  The smell was wonderful, although God knows what fumes were spewing into the atmosphere.

We’ve certainly made strides over the decades – technology is better, the air is cleaner and we are healthier.  But somehow, given the choice, I’d go back to simpler times, even if I had to have a short cord on the telephone.

18 comments on “GONE BUT NOT FORGOTTEN”