Death of a Bachelor by Panic at the Disco was the first song that Jeff and Pam Sparrow danced to at their wedding. 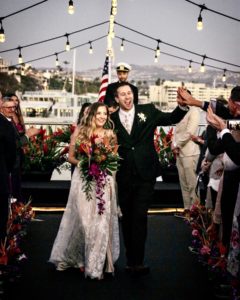 The ‘festivities’ started a week ago Thursday with the arrival of the ‘Minnesota Gang’ which included Linda’s 93 year old mother, Phyllis, Linda’s sister, Starlet, her husband Donnie and Starlet’s three daughters, Denise, Debbie and Melissa.  Melissa came in from her home in Houston and was glued to the TV watching ‘her’ Astro defeat the Yankees to earn a trip to the World Series.  Linda’s brother, Dale flew in from Florida. My brother, Jack and wife Sharon came in from Santa Maria on Thursday and our daughter, Dana dropped by to see everyone and to see what was going on.  My sister, Suzanne (you remember her from last week’s blog) and niece, Shelley came in from Arizona on Friday.  All arriving for the marriage of our son, Jeff to the now, newest Sparrow, Pam Lechtenberg (her last name is now so much easier for me to spell). 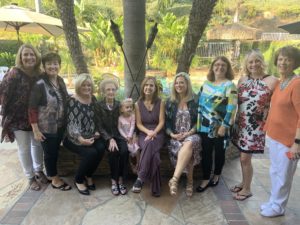 Friday night was the rehearsal dinner at our house and daughter, Stephanie joined the aforementioned group as did all the out-of-towners from Pam’s side of the family, including Pam’s parents, Tom and Betty.  Jeff and Pam wanted a Hawaiian theme dinner, so I brought in hundreds of palm trees that had to be back at the nursery by Monday.  Just kidding, those who have been in my back yard know that it’s already has a fairly tropical theme.  We had 55 people coming to dinner and we worried about lighting and heating and wind and . . . almost everything else one could worry about, but all for naught – it was a perfect evening, not too cool and no wind – the Hawaiian gods were smiling on us.  The caterer’s food was very good and the open bar seemed to keep everyone happy.  Gosh, those young kids can drink!! 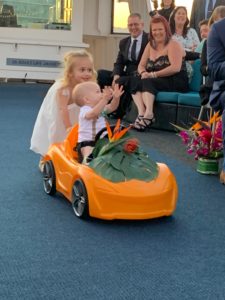 Addison pushing Will down the aisle 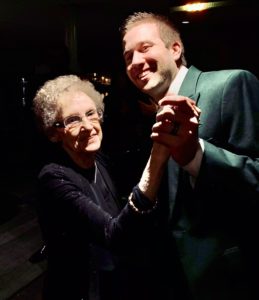 One of my favorite photo of the night: Jeff dancing with his grandmother, Phyllis Barnes

The Wedding ceremony took place on Saturday at sunset on the Hornblower’s Endless Dreams, which cruised Newport Bay on a weather-perfect evening.  The wedding ceremony which was on the top, or third deck, commenced with Addison, the flower girl, pushing Will, Pam’s sister, Jen’s son, down the aisle in a small car, followed by the wedding party and finally Pam escorted by father, Tom.  The dinner was served shortly thereafter on the first deck and once the speeches and toasts were done, the party was adjourned to the 2nd deck where the DJ and bar were located and the dancing commenced.  The four-hour evening went by in a flash and the next thing I knew there were 25 people back at my house to finish off the evening.

For my short speech I welcomed Pam into our family and told her that she would add to the already-great legacy of the Sparrow-Barnes women.  I told Jeff that he reminded me of two people, my Dad and Linda’s Mom, two of the nicest, kindest, most caring people I know and reminded him that while his mother and I really aren’t all that nice and kind and caring, we carried the gene for all that stuff and passed it along to him.  You’re welcome! 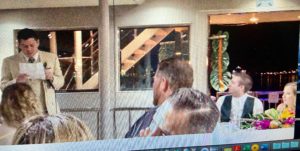 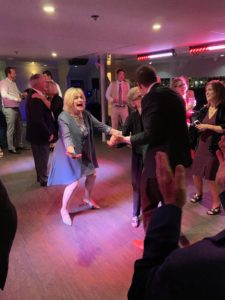 Linda, making sure her mother didn’t fall when dancing with Jeff 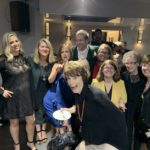 Sister, Suzanne, with empty cake plate in hand, ‘photo-bombing’ an otherwise classy picture of the ‘Barnes-Sparrow’ girls with Jeff

It was an exhausting and exhilarating weekend and it was great to connect to family members new and old.  Jeff and Pam are going to take a few months to rest up before heading to Thailand for their honeymoon in February.

Thanks to all who came and made it such a great event.

3 comments on “Death of a Bachelor”