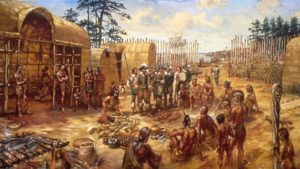 The real First Thanksgiving -in Jamestown

I am a Masterpiece Theater junkie.  I think I’ve watched every program they’ve broadcast, from the divine Upstairs, Downstairs to the questionable Press.  One of my favorite contemporary series is Jamestown.  It so fascinated me that I decided to do some research and read a bit more about it.  So I bought the book, Marooned: Jamestown, Shipwreck, and a New History of America’s Origin, by James Kelly.  Not only was it an exciting tale of intrigue, human behavior and the founding of our current form of government, it contradicted just about everything I learned in school about America’s “first” colony. But wait a minute, wasn’t Plymouth Rock the site of our first colony?  I’ve been eating two pieces of pumpkin pie for years as a tribute to the Pilgrims’ founding of our nation.  Well, according to Mr. Kelly – not so fast.  Turns out, like a lot of history, the story of the Mayflower settlers vs. those in Jamestown was colored by the fact that winners write the history books.  So, if like me, you might be interested in the following fast facts. 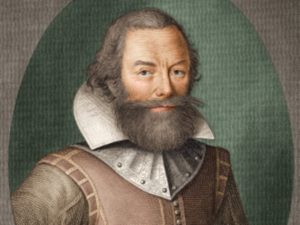 I could go on and on but by now I know you’re weeping with boredom.  Let me just finish with this – why do we celebrate the Pilgrims each November rather than the settlers of Jamestown?  As I mentioned at the beginning, it is in large part due to the old adage, “the winners write history”.  Jamestown, in the form of John Smith and Pocahontas, became part of southern culture.  John Smith wrote a book, General History, about his experiences but by the mid-1800’s  Northern scholars, mostly from Massachusetts, began attacking Smith’s credibility.  In the 1840’s the well-written description of the Mayflower settlement, Of Plimouth Planation, was discovered and was mass produced in 1856.  Thanksgiving was first celebrated as a national holiday in 1863, as a day to thank God for the advancing army and navy of the Union.  The Union victory gave New England a decisive moral advantage for the next several generations as no one was going to look to the South for a story about America’s birth.

I hope this peaks your interest a bit in Jamestown.  Or not.  I understand not everyone is as interested in this stuff as I am.  There is so much to discover in this story but even if you don’t read any more about it you might toast those poor souls who founded Jamestown next Thursday.  It’s as good an excuse as any to have another glass of wine.

3 comments on “THANKSGIVING WITH THE PILGRIMS… A SHAM?”