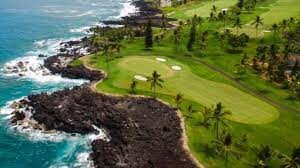 “It is not a good time to travel to the islands.  We know that the visitors who choose to come to the islands will not have the typical kind of holiday that they expect when they visit Hawaii.” Hawaii governor, David Ige   Aug 24, ‘21

Given that there are a lot of places that I’m not welcome, Governor Ige’s admonishment meant little to me, and as I parsed his statement more closely, it was clear he was saying that we shouldn’t come, not that we couldn’t come.  We had already cancelled one trip to Hawaii last year, not again – Aloha Big Island!

Getting There is Half the Fun

I’m here to tell you that, in today’s world of travel, getting there is not ‘half the fun’ – it’s not even a small percentage of the fun.  We wore masks from the minute we stepped into the airport in Long Beach, until we reach the Big Island in Hawaii. We kept it on while we waited for our luggage, kept it on as we waited for the bus to take us to the car rental location, wore it on the bus, wore it while we waited in line for the rental car agent and the car.  Finally, in the car . . . mask off – whew!!  I felt like I was holding my breath that whole time!  But . . 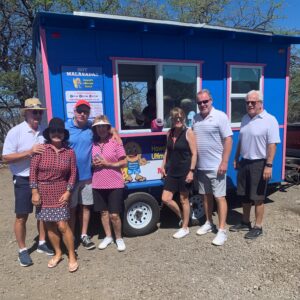 It was all worth it as we (the ‘we’ on this trip was Chuck & Linda Sager, Ed & Stacie Hunter, John & Judy VanBoxmeer and Linda & me) finally inhaled that heavenly tropical air, saw the palm trees swaying in a gentle breeze, and actually had the feeling that . . . we had escaped.  There was one drawback, and that was that everyone in Hawaii had to wear a mask, inside and out – it’s was one of the only things that Governor Ige could still control.  But . . .

No masks on the golf course!!  Our first round was at the beautiful Mauna Lani Golf Course, with several holes right on the water – one of the most spectacular being #15 on the South Course, where it is said that more photos are taken there than any other golf hole in Hawaii.  Not sure who’s counting, but in spite of us taking our photo there, you’ll find that it didn’t make the cut for this blog.

In Search of Malasadas

Chuck, who is like a local in Hawaii, had introduced us to Malasadas (which roughly translates to ‘Portuguese Fried Dough’ – basically, they’re fancy doughnuts, but better!) when we were last here and so the next morning the men got up and headed down the road for where the Malasada truck & trailer usually park.  No truck.  We drove a little further with the thought that perhaps the ‘Malasada lady’ parked somewhere else today.  I’m not sure we were looking for her or whether we were just killing time as we visited the resorts of Mauna Kea and Hapuna, then returned to ‘the Malasada spot’, but no Malasada truck, no Malasada trailer, no Malasada lady!  It was a holiday (Labor Day), so maybe she wasn’t laboring this day.  Nonplussed, we drove to the local market and found packaged Malasadas – not bad, but definitely not the same. 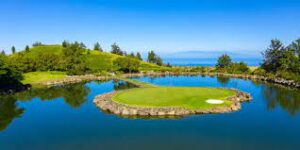 What I had written here about our week on the Big Island, sounded too much like a very detailed, boring diary as I reread it.  So, I’ll save you the agony of reading it.  There was lots of golf, eating and drinking – not necessarily in that order 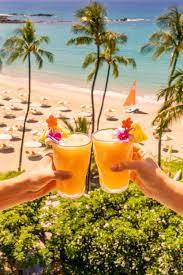 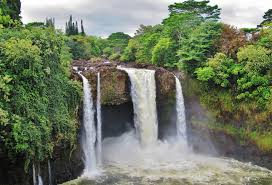 Rainbow Falls – which we didn’t see!

I was hoping to tell you about my adventures to the ‘Five Favorite Waterfalls’ on the Hilo side of the island that I had researched and planned a trip to, but alas that trip got scrapped for either golf, food, drinking or all of the above.

In spite of that, Governor Ige, we had the ‘typical kind of holiday we expected’! 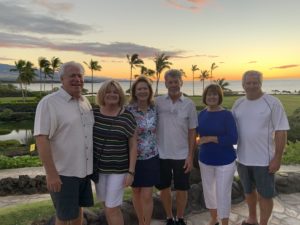 As those who have been there know, landing in Kona at Keahole Airport on the Big Island of Hawaii is like what I imagine it would be like landing at Jurassic Park International Airport while the earth was still cooling.  Black lava dominates the landscape all around the airport and you wonder if there is really any civilization down there.  But indeed, there is.

Linda and I were invited, along with Jack & JJ Budd, to Chuck & Linda Sager’s timeshare at the Hilton Grand Waikoloa.  We arrived at the complex’s tiki bar just in time to watch the second half of the 49er-Viking game.  While the outcome pleased this life-long Niner fan; Linda, a Minnesota native and avid Viking fan, was not that happy, but looking forward to a week in Hawaii seemed to assuage the pain of the loss.

Typically, the colors of the Big Island are a mix of azure blue skies reflecting a sea-foam green ocean, contrasting with uneven natural black lava outcroppings against a variety of lush verdant golf courses, but this week Mother Nature had another color in mind . . . gray.  The weather for the week showed rain every day.  It’s no secret why Hawaii is so green!

But we were going to have fun anyway, and as usual, the weatherman was wrong, in fact aside from our first round of golf at Kalani Country Club (previously known as the Big Island Country Club) in a light rain, we never really experienced much precipitation.   Even in the rain, Kalani was one of the most simply beautiful courses I’ve played – because it’s ‘out of the way’ in the mountain and it was raining, hardly anyone was on the course so we played as a six-some – a most enjoyable welcome round to the Big Island.

As a ‘travel blogger’ of sorts, I feel an obligation to share some of the things learned on this trip; so following are a few travel tips. 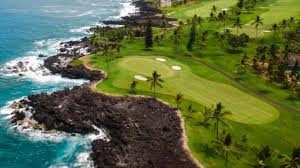 1st Travel tip: Golf – If you come to the Big Island to play golf, forget the expensive ‘named’ courses like Mauna Lani and Mauna Kea (we played those and we all got across the ocean on the beautiful 15th hole at Mauna Lani and the 3rd hole, from the tips, at Mauna Kea: Big deal!) and play Kalani and the Kona Country Club (south of Kona) – great lay-outs, ocean and mountain views, less crowded and much less expensive!

2nd Travel tip: Food – Breakfast was mostly in with all of us enjoying Jack’s smoothies, some delicious bagels, some cheese eggs and some Kona coffee – although we did find some delicious banana pancakes at several locations, which I would recommend.  Lunch was usually late after golf at places like the beach at Mauna Kea Hotel which is looking a little tired these days, Tommy Bahamas in Mauna Lani, or at ‘On The Rocks’ in downtown Kona.  We BBQed a couple dinners at our condo and went to Roy’s for a nice dinner, where we met Wayne Newton.  But the best travel tip on food is making sure that you find the Malasadas truck parked along the main highway and stop and get a Portuguese doughnut or 12.  Eat them while they’re hot, they are delicious! 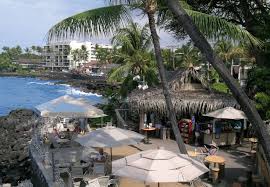 ‘On the Rocks’ Kona 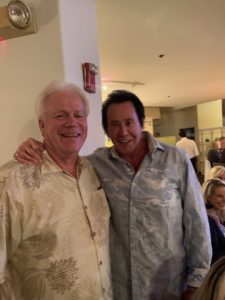 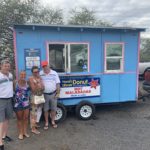 3rd Travel tip: Entertainment – If you like magic and comedy, you will love the Kona Kozy Magic & Comedy Show in the Mauna Lani shopping center, next to Tommy Bahamas.  It’s a small theater, probably no more than 30 seats; we were six of about 12 people in attendance that night.  He is very funny, he does some great magic and gets the audience engaged.  You can have dinner next door at the Pele Wok restaurant like we did and bring your own alcohol to his show – I think we brought in a case of wine.  A very entertaining evening 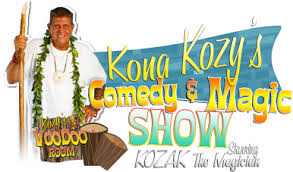 Final Travel tip: Drink – If you’re planning a trip to the Big Island in the near future and like wine, you should plan on bringing your own, as we depleted the island of most of its supply while we were there.

No trip to Kona is complete without a visit to the spectacularly gigantic Kona Waikoloa Hilton Hotel, which we visited on our last evening there and watched a beautiful sunset – yes, the weather was clearing up just as we were clearing out. 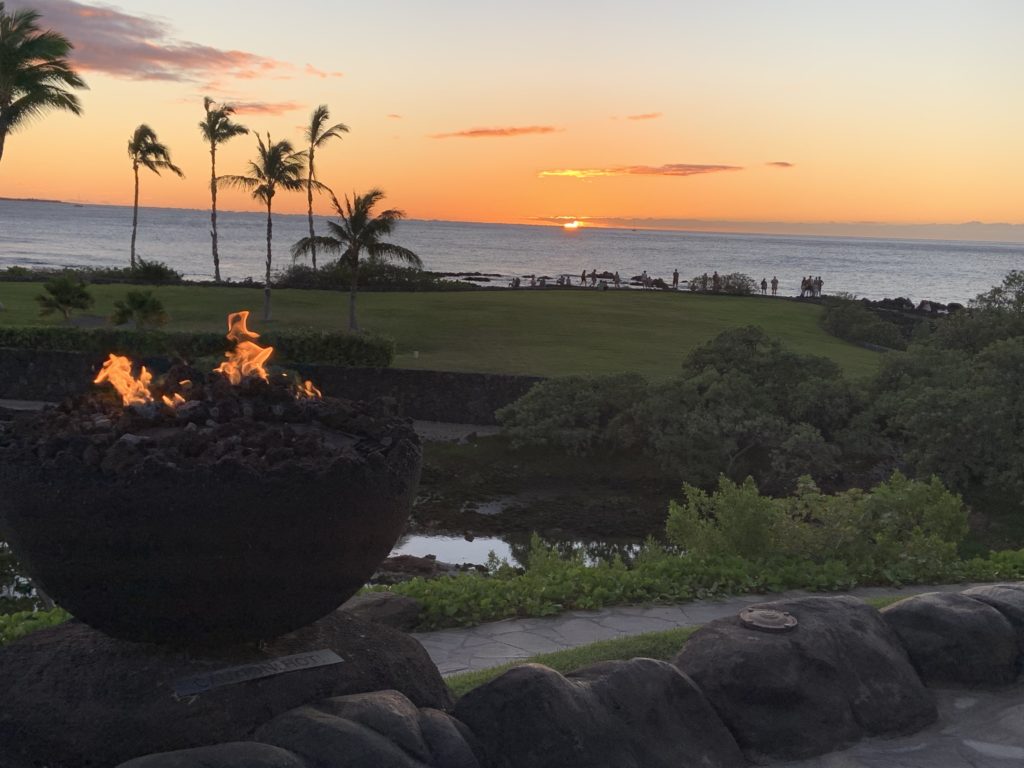 Sunset on our last night at Waikoloa

A special thanks to Chuck Sager, who knows this island like the back of his hand and was able to get us to all the roads less traveled by most tourists.