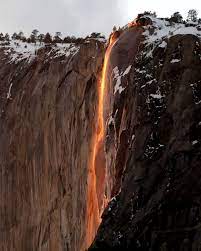 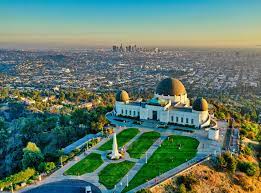 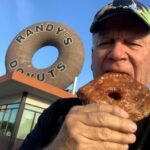 One claims to be “The Happiest Place on Earth” while the other just may have actually been.

Only read if you have nothing else to do.

(Cue the whistling of the Mayberry theme song) 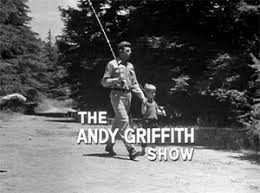 Let’s first examine the bios of the main characters from that nostalgic television program, The Andy Griffith Show, which took place in the fictional town of Mayberry, North Carolina.

Andrew Jackson “Andy” Taylor: A pragmatic and genial sheriff and justice of the peace, who never wore a gun or a tie and didn’t have too much trouble keeping peace in this bucolic southern town. He was a widower, who had a son, Opie and a paternal aunt named Aunt Bea.  He had a polite charm and  generally keeps the peace with common sense. 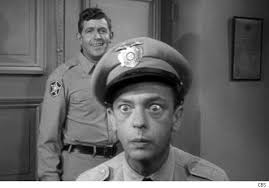 Beatrice “Aunt Bea” Taylor: Aunt Bea was a spinster who raised Andy. She was living alone in West Virginia when Andy asked her to come and live with Opie and him when their current housekeeper, Rose, married and moved out of Mayberry.

Bernard (? middle name) “Barney” Fife: This wiry, high-strung deputy was a comic genius, who played the bumbling sidekick to perfection. He was single, but was seriously dating Thelma Lou. He did wear a gun and a tie, but the gun was never loaded. However he kept a bullet in his shirt pocket for emergencies. Most of the time when he pulled it out he ended up nearly shooting himself in the foot. Although Mayberry had little crime, Barney refers to the town as ‘The Gateway to Danger’.  Not as part of any plot line, there was some controversy over Barney’s middle name. In Season 2 he says his middle name is ‘Oliver’. In Season 4, his high school yearbook shows 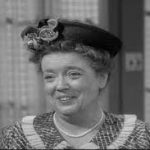 his middle name as ‘Milton’. In Season 5 he states his full name as Barney P. Fife. Sadly this is the stuff that keeps me awake at night.

Gomer Pyle: Well Gollll-ly! Gomer is the dim-witted, sleepy-eyed, single, mechanic at Wally’s Filling Station with a toothy grin and a southern accent. He is sometimes deputized when Barney needs a hand at screwing up a case. Gomer leaves the show after Season 4 to start a new series, Gomer Pyle, USMC

Goober Pyle: When Gomer signs up for the Marines, he recruits his long lost single cousin, Goober to replace him as the mechanic at Wally’s Filling Station. Both were very good-natured and always willing to help, sometimes to a fault. The actors who played Gomer and Goober where both from Alabama, so the southern accents were real. 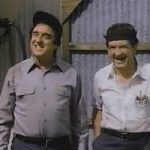 Helen Crump: Helen is single and from Kansas and moves to Mayberry for a teaching assignment. She is Opie’s teacher (he calls her ‘old lady Crump’).  When Opie asks his dad for help on a history assignment, Andy’s advice is misunderstood by Opie which leads to Helen marching down to Andy’s office and giving him a piece of her mind. One thing leads to another and the next thing you know Andy’s walking her home and they become ‘an item’.

Floyd Lawson: The fastidious, slow-paced, often absent-minded local barber who dispensed advice along with his haircuts. Floyd is single and his character is said to be based on Andy’s real barber 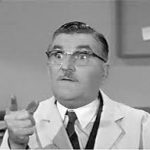 from his hometown of Mount Airy, North Carolina, (sounds oddly similar to Mount Pilot the fictional neighboring town to Mayberry) where he owned ‘Floyd’s City Barber Shop’. Howard McNear, who played the character Floyd, had a stroke midway through the third season and could not stand for any length of time or move very well. But he returned to play Floyd as the writers kept his character sitting down most of the time.

Howard Sprague: The milquetoast county clerk with mustache and bow ties had a penchants for philosophy and culture, but was a repressed ‘mama’s boy’ who lived with his overbearing and manipulative mother. Due to is upbringing, he was socially stymied especially when it came to dating. In one episode Howard tries to be a stand-up comic, unfortunately people laughed at him and not with him. 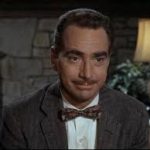 Otis Campbell: The town drunk who was also sometimes deputized so he could let himself in and out of jail. Viewers meet Otis’ wife in an episode where Otis is jailed for assault, the first time he’s jailed for something other than drunkenness, because he threw a leg of lamb at his wife, missed and hit his mother-in-law. Otis stopped appearing toward the end of the series because sponsors raised concerns over the portrayal of excessive drinking. (Perhaps the beginning of political correctness??) 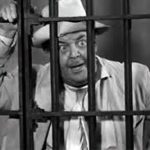 So what we’ve discovered, if you haven’t already realized it, it’s that all the characters, except Otis, who was always drunk, were not married. Perhaps this is why Mayberry was considered by many as The Happiest Place on Earth.

Hey, I didn’t make this up; I just heard it at the airport and am passing it along for your perusal and consideration.