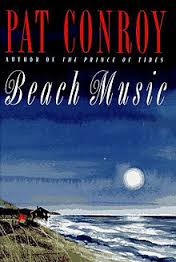 Beach music is the music I hear on the rare occasions I frequent the beach. Beach Music is also the name of a novel by my favorite author, Pat Conroy, who wrote a number of classics, and who sadly passed away earlier this month. He wrote prose like poetry – such a gifted writer, gone too soon. Here a passage from Prince of Tides that I think exemplifies his writing . . .

It was growing dark on this long southern evening and suddenly, at the exact point her finger had indicated, the moon lifted a forehead of stunning gold above the horizon, lifted straight out of filigreed, light-intoxicated clouds that lay on the skyline in attendant veils. Behind us, the sun was setting in a simultaneous congruent withdrawal and the river turned to flame in a quiet duel of gold.

You and I would just write something like, “Hey, the moon is coming up just as the sun is setting, cool.” 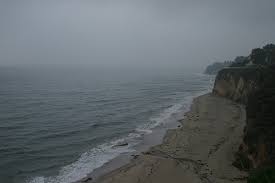 Although I have lived nearly my entire life within a half-hour’s drive of one beach or another, I am not, nor have I ever been, a ‘beach person’. So the music I hear is not actual music, but rather the vibe of the beach; the pounding of the surf, the squawking of sea gulls, the spray of the ocean on my face. To me, beaches are most interesting in the winter when it’s cold and rainy. It’s at those times that the coast briefly returns to its natural state of sand beaches with no umbrellas stuck in them and the rhythmic and steady slapping of the ocean on the shore. Even without all the man-made trappings, each beach has its own personality. My destination today is Malibu. I choose it not for it’s popularity or its connection to Hollywood stars, but rather because of its most-interesting history.

Malibu’s ‘Hollywood’ past includes being the backdrop for such movies as Gidget, Planet of the Apes and Grease as well as the TV productions of Happy Days, Baywatch and The O.C. – yep the series about life in Orange County was filmed in Los Angeles County! Past residents of Malibu include, Charlie Chaplin, Mary Pickford, Douglas Fairbanks, Gloria Swanson, Rod Steiger, George C. Scott and Johnny Carson to name just a few. The long list of present residents includes, Leonardo DiCaprio, Robert Redford, Tom Hanks and Whoopi Goldberg.

With all the enclaves in southern California, why have so many stars chosen Malibu as their home? I thought you’d never ask.

It’s all about the privacy, and of course the weather.  And why is Malibu more ‘private’ than any other place? I found the answer to that 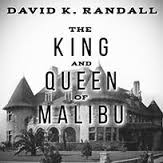 question in a book I recently read called, The King & Queen of Malibu, written by David K. Randall. It is a fascinating story of Fredrick and May Rindge, an odd, millionaire couple from Boston, who came to California for ‘health and wealth’ and in 1891 ended up buying over 13,000 acres of property called ‘the Malibu’, that included Topanga Canyon, the Santa Monica Mountains and Malibu Beach.

The Rindges guarded their privacy zealously; hiring armed guards to shoot any trespassers, which they did! They successfully fought off Southern Pacific Railroad, who wanted to establish a railroad line through their ranch, but in 1929 lost an ‘eminent domain’ fight, which allowed the government to put a road through their property along the coast – that road today is the Pacific Coast Highway (PCH). But May Rindge, then a widow, kept control of Malibu Beach, and in order to raise much-needed money, she allowed a few Hollywood stars to build vacation homes there, and thus ‘the Colony’ was created.

I decided that I would take the hour or so drive north to discover what I could of what Malibu looked like today. I arrived in Malibu in an early morning fog that would hang on for another hour or so before the sun burned through the marine layer to reveal the full extent of the coastline. The fog was dense and close and a chill rented the air on this last day of winter. 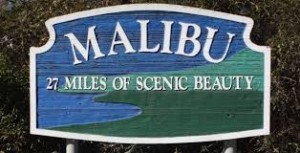 Upon entering the city limits of Malibu, I encounter a sign welcoming me to Malibu, stating, “27 Miles of Scenic Beauty’. My research had told me that since being incorporated, Malibu had 6 miles of that 27 annexed by Ventura County, so it’s now only 21 miles of . . . regarding the ‘Scenic Beauty’, when one drives north on PCH though Malibu, the mountains rise sharply up on the right so all one sees is dirt or hillside grass. On the beach side there is a continuous line of two-story homes that are connected so as to limit access to, and visibility of, the beach; so all one can see are garages and the backs of houses. I’m sure the views from the homes are great, but the average Joe can not only not get to the beach, he can’t even see the ocean. And although Malibu’s beaches are all officially ‘open to the public’, beach access is limited and well hidden thus keeping Malibu a secluded and private city; which is why the stars are there.

As I drove further up the coast, I came to the realization that I was not only not going to see Jennifer Anniston walking her dog on the beach, but I wasn’t even going to get to walk on the beach myself.  As I turned around and headed south for home, I remembered why I never really was a beach person.

So, what about the trees in the picture?  Glad you asked.  If you travel on Highway 99, which goes north-south through the heart of California, about 10 miles north of Fresno, if you look carefully, drive slowly, very slowly, you will see a palm tree and a pine tree together in the meridian.  Nothing else, no grassy park, no plaques, no mention of this being a landmark, no special entrance, in fact, no entrance at all, just rows and rows of oleanders along the meridian, then the trees, then more oleanders, all protected by the freeway guard rails.  Don’t look for a place to pull over to see the trees, there isn’t one. 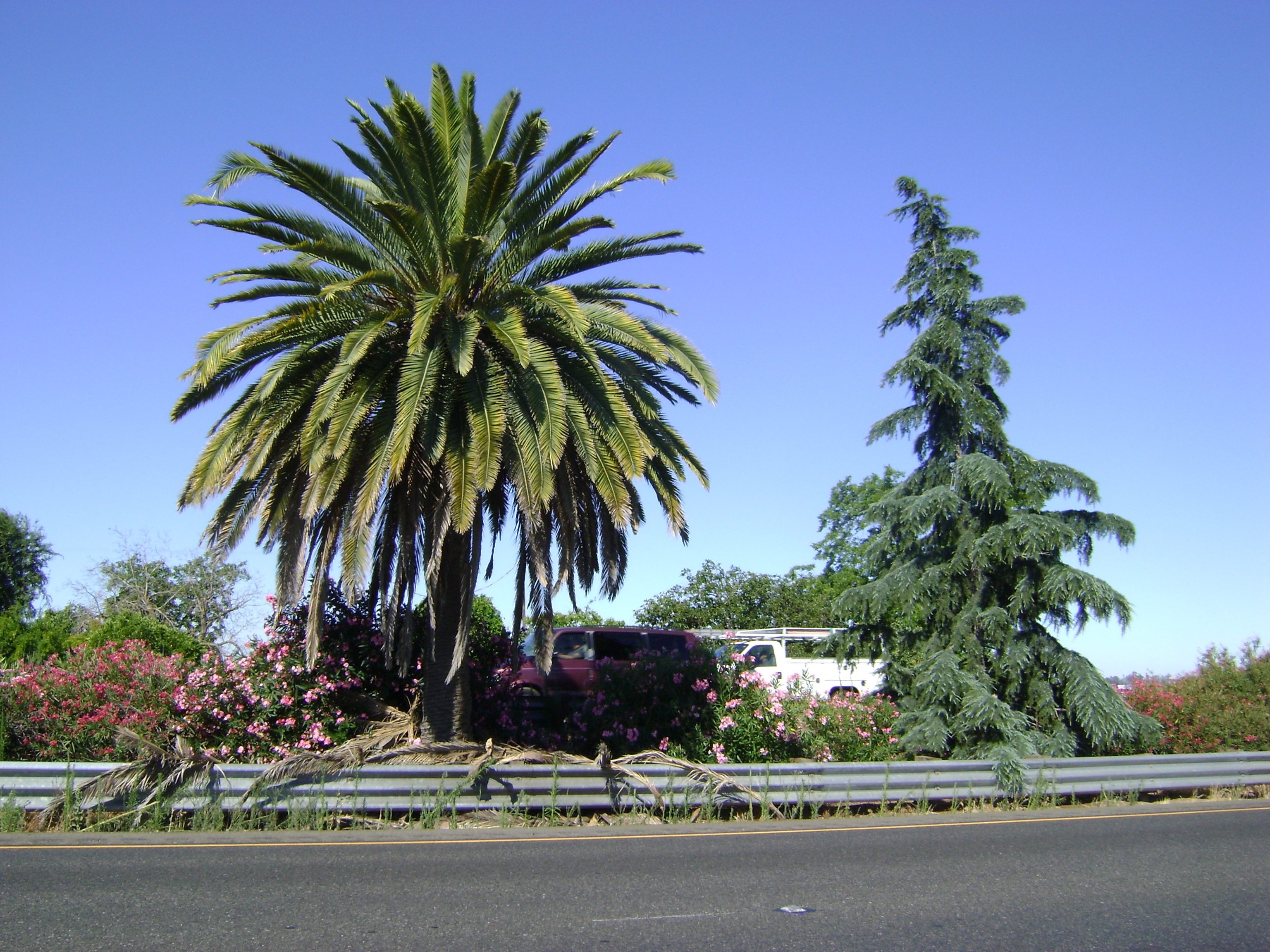 The history of how the trees got there is fuzzy at best.  Most historians suspect they were put there by agricultural students from Fresno Normal School (now Fresno State University – they had to take the word ‘Normal’ out because . . .  it’s Fresno!), around 1915.   We know they were there before 1926 when Highway 99 was under construction.  It was then workers from the Department of Highways (later to become CalTrans) were ready to cut down the trees to make way for the highway, when a crew member (one of California’s first “tree-huggers”) suggested that the highway go on each side of the trees, which it did.

I was challenged to take pictures of the trees as I drove by (in both directions . . . several times!) window rolled down, one hand on the wheel, one hand on my camera.  As I checked out the pictures that I’d taken I found that they were all a little blurry.  So to get a good look, or rather a good picture, like the one shown here, one would have to illegally pull off to the side of the highway and hope the CHPs are still back at the Dunkin’ Donut cleaning the contents of a jelly roll from their uniform.  Not to be denied a good picture, I got a bright idea.  On my next trip around I pulled off to the shoulder of the highway across from the trees, popped my hood and pretended to be looking under it (which is a fairly common occurrence on many of my road trips), but really I was taking pictures.  Three people slowed down to offer help, but I gave them a big ‘OK’ sign and they moved on; perhaps they didn’t want to get involved with someone who was seemingly taking a picture of his motor.

The two trees have special meaning for me.  I was born and raised 28 miles north of ‘The City’ (San Francisco) in Novato, and then a teaching job brought me to what my northern friends call ‘the dark side’ and have now spent the past 40 years in ‘The O.C.’ (Orange County) in southern California; so I feel eminently qualified to ponder and pontificate on the state of the two halves of the state.    I have observed this: If you talk to Northern Californians they may refer disparagingly to a number of things in the south, nothing personal, just things like, “How do you stand . . . ‘all the smog?’, ‘all the traffic?’, ‘all the people?’, ‘all the fake boobs?’ And then add, ‘and stop stealing our water!’.  If you ask Southern Californians about the north and those remarks, they say, ‘Chill dude, whatever . . . wait a minute, what did you say about boobs?’  An objective observer might say the ‘North’ is a little up-tight and the ‘South’ a little too laid back.  As the self-proclaimed expert on these things, I have seen these traits exhibited as well as some other differences, but I actually see so many more similarities that it’s not conceivable to me that the state will ever be divided.  When I think of California I don’t think north and south, I think of things like our beautiful coast line, Yosemite, Lake Tahoe, Palm Springs, the wine country, the San Joaquin Valley, where nearly every crop known to man can be grown.  I think of the creativity in Silicon Valley as well as in Hollywood.  I think of the history of the Missions and of the Gold Rush.  I think of those great writers who lived in and wrote about California, John Steinbeck, Jack London, John Muir, Mark Twain and one of my favorites, Herb Caen, although he had no use for the southern part of the state.  I think of the fact that no matter where you live in California you’re just a few hours (and sometimes just a few minutes) from the mountains, the desert, and the ocean.

So I think the palm and the pine tree are indeed special, not because they create a ‘border’, but because they’ve existed peacefully, side-by-side for so many years.

The two trees were supposedly planted in the exact middle of the state, but actually they’re about 25 miles off, not sure which way.  Incidentally, the palm tree is a Canary Island Date Palm and the pine tree is not a pine at all, but a Deodar Cedar; neither is indigenous to California, but then most Californians aren’t.  Viva La Difference!