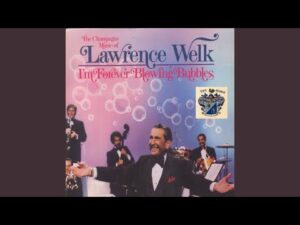 The name Lawrence Welk calls up one of two thoughts:  If you’re of a certain age, you’re thinking, bandleader, who had an accent, a TV variety show, a ‘bubble machine’ and played ‘champagne’ music (Because his music was smooth yet bubbly, like champagne); and everything was always “Wondaful ah Wondaful”.  If you’re not of a certain age, you’re thinking, “Who the heck is Lawrence Welk, and why are we even talking about him?”

Because Linda and I spent last week at the Lawrence Welk Resort in Escondido, CA, now, just called the Welk Resort, as Lawrence has passed, but not without living the quintessential American dream.  He was born in the German-speaking community of Strasburg, North Dakota, to parents who had emigrated from Odessa, Ukraine.  He left school while a 4th grader, to help work on the family farm and did not learn to speak English until he was 21.  He loved music from an early age and convinced his parents to buy him an accordion for what would be today between $5 – $6,000!  His love of music, business acumen and focused drive, got him on the radio, then television, then into creating resort destinations – the one in Escondido, his first.  In all, he ended up creating eight, up-scale resorts in places like Lake Tahoe, Cabo San Lucas, Palm Springs and Branson, Missouri.  He ultimately sold them to Marriott for $430,000,000.  Not bad for a guy with less than a 4th-grade grade education!

After checking into the Welk Resort on Saturday, I took Linda up to the Temecula Creek Inn on Sunday, to meet up with 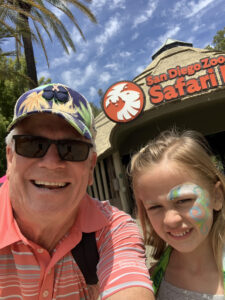 daughters, Stephanie and Dana to do a wine tasting that they had given her for Mother’s Day.  Dana brought daughter, Addison, with her so I could babysit her for the next 24 hours.

Addison and I drove directly from the Temecula Creek Inn to the San Diego Zoo Safari Park (the old Lion Country Safari), which I hadn’t been to in many, many years, and was pleasantly surprised at what a great facility it had turned into.  But before we could see the elephants, rhinos, lions, giraffes, apes, birds, etc., Addison had to have her face painted and visit a few of the gift shops.  After 3-4 very fun hours with the animals, we then went back to the Welk and found the pool with the giant water slide that Addison showed no fear in going down – feet first and head first!  After a full day of zoo and pool, we drove to the city of Vista for Addison’s favorite dinner – sushi!  And on the way home we saw the ‘Blood Moon’ and I explained to Addison what an eclipse was.  I asked her the next morning if she remembered what it was and she told me that this was a lunar eclipse where the earth passed between the sun and the moon – so the lesson was learned, as I imagined it would be!  We met the girls in the morning for breakfast back at the Temecula Creek Inn – as I gave Addison back to Dana, I told her it wasn’t really like babysitting, it was like hanging out with a very fun young lady! 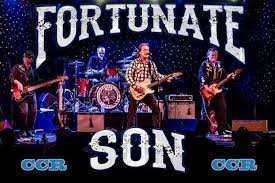 For the next several days, Linda and I played three rounds of golf, two on the Welks property, one at the Oaks Course, a short par 3 course (not recommended), one at the Welks Fountains Executive Course (recommended), and one round about 30 minutes away at Mt. Woodson, or what I’ve renamed it, “Mt. Bring-A-Lot-Of-Balls”.  It’s a beautiful course in the hills of Ramona and I would highly recommend this one – just bring plenty of balls!  On our way home from Mt. Woodson, we just happened to go by Harrah’s Casino (I should have known that if I left the navigating to Linda that we’d end up at a casino!)  We had a great dinner in the casino at Fieri’s Steak House and felt good about the contributions we gave to our Native American friends at the casino.

The night before we checked out, we went to the great little theatre (seats about 350) on the Welk property to see a performance by Fortunate Son, a Creedence Clearwater Revival cover band – great songs, great show!!

Excellent facility, fun time, and close by – good enough that it could be on our ‘annual trip’ list.  Perhaps Addison will want to join us for a day or two!!