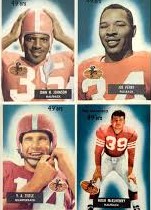 I’ve started writing this blog several days before the Super Bowl, so I’m still full of optimism for a team that I’ve rooted for since 1952 when I attended my first 49er game at the old Kezar Stadium in Golden Gate Park – 49ers lost 20-17 to the Chicago Bears!  Those were the days of the 49ers ‘Million Dollar Backfield’ of Y.A. Tittle, Joe Perry, Hugh McElhenny and John Henry Johnson, all Hall of Famers today.  The reality is that even though they were know as the ‘Million Dollar Backfield’ their four combined salaries didn’t even add up to a million dollars! As a point of reference, current 49er quarterback, Jimmy Garoppolo makes about $1.7 million PER GAME!  While I’ve enjoyed the many Super Bowl years of 49ers past, particularly the two won by my former college coach, George Siefert, it’s been a little lean in terms of wins in recent years; so I’m really looking forward to this game in spite of it being played against, in my opinion, the best player in the game today, Kansas City Chief quarterback, Patrick Mahomes.

I’ve concluded that people watch the Super Bowl for three main reasons: 1) they like football, 2) they are mostly watching the ads (which cost about $5.25 million per 30-second ad) and the half-time show, or 3) they like to bet.  I guess there is a fourth reason, they just like to party, but they are probably not watching much of the game or the ads!  So while I can’t comment now on the game, the ads, the half-time show or the party you attended, I can comment on the betting. OMG! 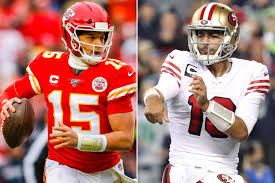 Of course you can make the two most common bets, the outcome of the game with odds (giving or getting points) and total points scored (the over-under), but the ‘fun’ bets are called the proposition bets or ‘prop bets’.  Here’s just a few, and even though it’s after the game, you can still pretend to bet on these and see how you’d have done:

And so many more!  The estimate of total money on all bets on this Super Bowl is $6.8 billion! 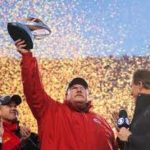 Well, as one might suspect from this die-hard Niner fan, I was happy with the game up until the 4th quarter, but then, not so much.  I can take solace in the 49ers loss in that they are a young team, but then again, Mahomes is only 24 years old!

Answers to above bets:  Alex was shown, Lopez had 3 wardrobe changes, Lovato sang all the words to the Anthem in just under 2 minutes, the Golden Gate Bridge was not shown, Coin toss – tails, more points in the 4th quarter, Crosby and Malkin got 2 points and Mahomes was sacked four times.

Wait ’til next year!