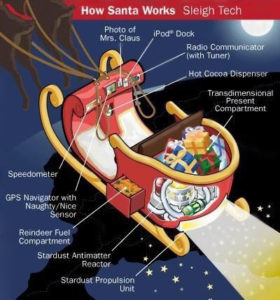 Now that you’ve been given those great gift ideas from Suzanne’s blog last week, I thought I’d continue that December Christmas theme with some little-known and less-cared about Christmas facts.

I really shouldn’t have even put my name on this one, since my search of the topic this week sent me to Roger Highfield’s book, The Physics of Christmas: From the Aerodynamics of Reindeer to the Thermodynamics of Turkey, as well as humorous comments on the book, from Amsterdam marketer, Alexandra Libina.  Highfield’s book raises questions that I’m sure you’ve all pondered; such as, Can Reindeer Fly? Why is Santa Fat?  Why is Rudolph’s Nose Red? How Does Santa Manage to Deliver Presents to an Estimated 842 Million Households in a Single Night?  If you’ve struggled with some of these conundrums, here finally are some answers . . .