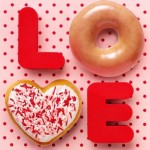 This week many of you will experience panic attacks as you realize that Valentine’s Day has once again occurred on February 14th.  I’m always baffled when I hear people (well, mostly my husband) say “What day is Valentine’s Day?”, as if it changes from year to year.  Personally, I’m not a big fan of the holiday.  I’ve seen too many people treat their significant other rather shabbily all year long and then think that a $9.99 bouquet of roses from Safeway will make up for it on Valentine’s Day.  But I do realize that I may be a minority in this respect, since millions of people around the world mark the occasion with cards, flowers, and it would appear, oversized teddy bears and lacy lingerie.  So I got to thinking about how we began this tradition.  Of course lots of people say it’s a “Hallmark” holiday and as you will read, the greeting card industry has certainly benefited from the day, but it turns out that Valentine’s Day has been celebrated for centuries and by some very unlikely people indeed.

There are many theories as to how Valentine’s Day got started and even who St. Valentine was.  The Catholic Church recognizes at least three different martyred saints named Valentine or Valentinus and they can’t quite decide which is the original cupid. Sounds like the old “To Tell The Truth” program to me.  In any event, the most popular legend contends that Valentine was a priest who served during the third century in Rome. When Emperor Claudius II decided that single men made better soldiers than those with wives and families, he outlawed marriage for young men. Valentine, realizing the injustice of the decree, defied Claudius and continued to perform marriages for young lovers in secret. When Valentine’s actions were discovered, Claudius ordered that he be put to death – on February 14.   Before his death, it is alleged that he wrote his jailor’s daughter a letter signed “From your Valentine,” thus setting up the greeting card industry for the next two thousand hundred years.  Around 498 A.D. the Pope, who was not a big fan of pagan holidays, decided to combine the remembrance day for St. Valentine with the pagan rite of Lupercalia, which was celebrated on February 15.  Never heard of Lupercalia?  The short version is that it was a fertility festival highlighted by two sacrifices:  a goat for fertility and a dog for purification.  That sounds about right. 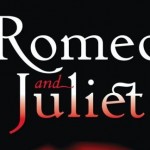 During the Middle Ages, it was commonly believed in France and England that February 14 was the beginning of birds’ mating season, which added to the idea that Valentine’s Day should be a day for romance. That seems just the slightest bit odd.  Really, when was the last time you stared out the window at birds mating and thought, “That is SO romantic!”.  For that matter, who in the heck watches birds mating?  Nevertheless, as the years went on the holiday grew more popular. Chaucer and Shakespeare romanticized it in their work, and it gained popularity throughout Britain and the rest of Europe.  By the middle of the 18th century it was common for friends and lovers of all social classes to exchange small tokens of affection or handwritten notes, and by 1900 printed cards began to replace written letters due to improvements in printing technology.  It is believed that Americans began exchanging hand-made valentines in the early 1700s. In the 1840s, Esther A. Howland began selling the first mass-produced valentines in America and it’s been downhill ever since. Howland is considered the “Mother of the Valentine”.   I think in some circles she might be known as the “mother” of something else.  She made her creations with real lace, ribbons and colorful pictures known as “scrap.”  Or “crap”.  I forget.  Today, according to the Greeting Card Association, an estimated 1 billion Valentine’s Day cards are sent each year, making Valentine’s Day the second largest card-sending holiday of the year, right after Christmas. Which brings up an interesting fact: women purchase 85% of all the Valentine’s that are exchanged.  I was stunned by that fact until I thought more about it.  Modern day traditions guilt men into buying flowers, candy, dinner and the aforementioned lingerie.  All women do is buy a card and we’re good to go. 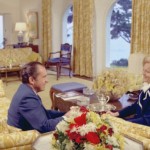 And since everything these days has a Presidential spin, I got to thinking about whether there were any romantics among our former Presidents.    It’s well documented that John and Abigail Adams had a wonderful 54 year marriage and were very devoted.  And the Reagans were renowned for their doe-eyed looks at one another. Harry Truman apparently wrote such torrid letters to Bess that she burned them all lest someone else read them.  Although I don’t think Harry’s love notes would even make it on to TMZ these days.  But there were also some head-scratchers among our former commanders-in-chief.  Woodrow Wilson, who was thought to be a pretty stolid guy was widowed after a 27 year marriage and was completely heartbroken.  Until six months later when he was described as a “school boy” when meeting his second wife, Edith.   Perhaps the most unlikely romantic was Dick Nixon.  We all remember him as rather stiff and sweaty, but apparently in his youth he was quite a romantic…and maybe just the slightest bit desperate.  Turns out that he was so enamored of Pat that he would offer to drive her and her suitors on their dates just so he could spend more time with her.  Kind of sad, really.  But then again, Valentine’s Day is named for a martyr so for all I know he exemplifies the holiday.  In any event, I hope you have a wonderful day regardless of how you choose to celebrate.  Just don’t go sacrificing any dogs.

Each year, due to family birthdays, my husband and I are usually on a road trip on Valentine’s Day.  This means we have been able to be with family on this “day of love”, which is a good thing.  Each year we both purchase Valentine’s Day cards that we think best express how we feel about one another.  There’s only one problem: my husband leaves the card at home in his dresser drawer.  Every. Year.

The first few years this happened I would hand him my card with great anticipation, waiting for him to read the sentiment and then what I had written to him about our relationship.  Then he would look at me and say sheepishly, “Oh, honey, I’m so sorry.  I left the card at home again.”  Each time I heard those words I was crestfallen.  And the scene repeated itself so often it became like Groundhog Day.

I would think: how can a man who remembers to bring his favorite cookies and his golf magazine on every road trip forget a card that is lying out on his dresser?  I admit, I was pretty pissy about it the first few years.  But then circumstances (and quite possibly some maturity) made me realize that it’s not about the card.

My husband tells me he loves me every day.  Not just on Valentine’s Day or our anniversary.  He tells me that every time I go out the door and when we go to bed at night.  He does little things like get my paper for me every morning and sets up my coffee so it’s ready to brew when I get up(okay, this has gotten easier since we bought a Keurig, but still…).  All in all, he’s a great guy who treats me very well.  I finally realized that these little daily acts are far more important than a $4 Hallmark card.

So, ladies, if you’re a bit disappointed in your spouse or significant other today because you didn’t receive a card or – and this is the worst – your husband sent flowers to your home instead of your office, please take a lesson from me and look at the bigger picture.

And if that bigger picture isn’t so good either, dump his sorry butt!