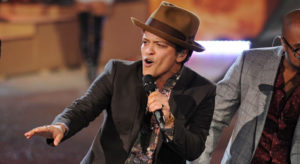 We all know the city of Las Vegas by several names, ‘Vegas’, ‘Sin City’, ‘Lost Wages’, to name a few, and we know, or hope we know, that ‘What happens in Vegas stays in Vegas’ – except what I write in my blog.  It is quite a city!  While this desert oasis loves its reputation as a ‘Gambling Mecca’, a few years back it tried to sell itself as a ‘family’ destination, but the only family it attracted was the mafia. Recently, in an effort to look like other large cities in the U.S., it acquired an NHL hockey team, the Knights, and next season will have the NFL’s Oakland/Los Angeles/Oakland Raiders – an apt place for this team and their irreverent fans.

But the reality is, Las Vegas, which means ‘The Meadows’ is like no other city on the planet, which I just witnessed last weekend. We were there to enjoy our annual golf trip, some great meals (diet starts Monday . . . again), some great friends and a blockbuster Bruno Mars concert.

Although I’ve been there too many times to remember (as well as times I don’t remember), the city never ceases to amaze me, as it might you as you read through these little known, and even less cared about, fact of ‘Sin City’.

Hope you learned a little something about Vegas that you can pass along to a friend at lunch today.

Our Cinco de Mayo/Kentucky Derby trip is always fun, not so much because of Las Vegas, but because of the great people that go; I could tell you more about it, but you know, for the most part ‘What happens in Vegas . . .