As followers of the blog know, Suzanne and I alternate writing each week, and for the previous two years, Thanksgiving has fallen on her week, which is a good thing, because she’s so good at writing appropriate holiday blogs.  I, on the other hand, tend to see things through lenses that are just a little warped. So rather than focusing on the ‘Three Fs’ – Family, Food and Football, like I should be, I’m wondering about things like if the turkeys really know how much their lives are in jeopardy this time of year.  I know turkeys aren’t real deep thinkers, after all they’re the birds that go outside during a rainstorm, look up, open their mouths and drown, and though they won’t be invited to a Mensa meetings anytime soon, even they must wonder why they’re being fattened up this time of year and why their friends keep disappearing. “Say, whatever happened to that nice couple, Tom & Giblets?”

I’ve also been thinking about the first Thanksgiving. It was in 1621 (No, I wasn’t in attendance). Due to a record harvest, the pilgrims invited the local Indians for a feast. The pilgrims were waiting for a reciprocal invitation the following year, but none was forthcoming. Why? We’re not exactly sure, but if we examine the recorded description of that first repast we can find some clues as to why the Indians were not that excited about inviting the pilgrims back to their place for dinner.

“No, you can’t sit at the table, but you can have seconds on the pie.”

First, the Pilgrims and the Indians didn’t speak the same language, so there wasn’t much ‘small talk’ going on between them at the dinner table, like, “Don’t you think the goat tastes a little gamey?” or “Have you started your Christmas shopping yet?” Secondly, the Indians were in the habit of bathing regularly; conversely the English pilgrims took a bath once a month whether they needed one or not. So no matter how good the roasted wart hog might have smelled, the odor from the pilgrims hung over the festivities.  A third factor may have been that the first invitation probably didn’t indicate a dress code; the English pilgrims, who were accustomed to dressing formally for dinner,most likely wore hats, waist coats, ruffle ties and buckle shoes and were probably aghast when their native American guests arrived barefoot and in loin cloths. 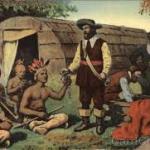 “I think I’m getting screwed here, but we’ll give you all these beads for Manhattan.”

Whatever the reason for the hiatus between feasts, it is assumed that during that first dinner there was some conversation amongst each group separately regarding the disposition of Manhattan, as the famous sale of that island took place just five years after that first Thanksgiving. I can see the pilgrims huddling together over by the pie tray, trying to see if they could gather enough beads and trinkets to equal $24, which is what they wanted to offer to purchase Manhattan. On the other side of the table, the Indians were having a very different conversation that may have ended with something like, “White man is trying to ply us with ‘fire water’ so they can take advantage of us, but I don’t think we even own Manhattan, so if they’re willing to give us $24 for it, I say we take it and run.”

I have some other random Thanksgiving thoughts, but with six in-law houseguests coming in this week, perhaps I better focus on the ‘Three Fs’, make that the ‘Four Fs’, I’m adding Firewater.

Hope you all have a wonderful Thanksgiving, filled with all the ‘Fs’ you can stand.