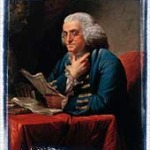 So, you’re feeling a bit more chipper this morning, aren’t you?  Unless, of course, you live in Arizona or Hawaii.  Because, once again, the bi-annual changing of the time occurred over the weekend and the ensuing arguments about it have begun.  Every year “experts” debate whether we even need Daylight Savings Time anymore and this year as I read one of the arguments against it, I became curious about whose bright idea it was to begin with.  Of course, living in Arizona, it’s all theoretical to me since we don’t change time.  But more on that later.  As it turns out, the first person to propose the “saving of time” was Ben Franklin, who up until this point I thought of as the inventor of electricity and the $100 bill.  Turns out that in 1784 Ben wrote a rather humorous piece while living in Paris as an American delegate to France, proposing various ways to save daylight during the summer months.  No one took his suggestions seriously, partly because at this point in his career he was well-known for being something of a sot and was suspected of seeking ways to have more daylight in which to navigate the streets in search of liquid refreshment.  So while his proposal was met with some amusement and limited interest, it went nowhere.  It took until the Twentieth Century for the idea of “saving time” to come to fruition.

The concept of Daylight Savings Time came into its own during World War I.  At that time, in an effort to conserve fuel needed to produce electric power, Germany and Austria began saving daylight on April 30, 1916, by advancing the hands of the clock one hour until the following October. Other, but not all, European countries immediately adopted this action.  The U.S., however, did not join in on the idea until 1918.  So, as hard as it is to figure out the time differences today with the help of  technology, can you imagine the difficulties 100 years ago?  Good thing the telephone was not in wide use at the time or people would be awakened at odd hours all over the world.  All that aside, after the War ended, the law proved so unpopular (mostly because people rose earlier and went to bed earlier than people do today) that it was repealed in 1919.  However, Daylight Saving Time became a local option, and was continued in a few states, such as Massachusetts and Rhode Island, and in some cities, such as New York, Philadelphia, and Chicago. So figuring out what time to call your Aunt Martha became a matter of figuring out what state or city she lived in (and hoping she didn’t move around too much).  Then in response to WWII, President Franklin Roosevelt reversed the 1919 law and instituted year-round Daylight Saving Time, called “War Time,” from February 9, 1942 to September 30, 1945.  When the law sunsetted (excuse the pun) at the end of 1945 there was no federal law regarding Daylight Saving Time.  So again, there was mass confusion as states and localities were free to choose whether or not to observe Daylight Saving Time and could choose when it began and ended. This understandably caused confusion, especially for the broadcasting industry, as well as for railways, airlines, and bus companies.  And, not meaning to be too repetitive, it became even more confusing to determine what time to call Aunt Martha. 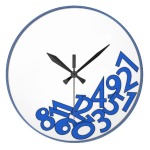 No one knew what time in was for several decades in the U.S.

In the early 1960s, observance of Daylight Saving Time was quite inconsistent, with a hodgepodge of time observances, and no agreement about when to change clocks. The Interstate Commerce Commission, the nation’s timekeeper, was immobilized, and the matter remained deadlocked. Many business interests were supportive of standardization, although it became a bitter fight between the indoor and outdoor theater industries, and all farmers were opposed to such uniformity. State and local governments were a mixed bag, depending on local conditions. Perhaps the most telling example of this confusion was on the 35-mile stretch of highway (Route 2) between Moundsville, W.V., and Steubenville, Ohio, where every bus driver and his passengers had to endure seven time changes! To prove my point about when to call Aunt Martha, the ICC interviewed telephone operators from all parts of the country who confirmed that people were perpetually flummoxed as to what time it was in the city they were calling.  Finally, in 1966, Congress stepped in to end the confusion (remember when Congress actually did something?).  The Uniform Time Act of 1966 established a uniform Daylight Saving Time throughout the U.S. and its possessions, exempting only those states in which the legislatures voted to keep the entire state on standard time.  Arizona and Hawaii were the only two states that elected to remain on Standard Time.  Arizona has such intense heat in summer daylight hours that it wasn’t considered a benefit for its residents to have even more sun.  As I can personally attest, this is one time the legislature got it right.  Arizona in July is like living on the face of the sun.  One more hour of it each and every and I’m certain the suicide rate would skyrocket.  As for Hawaii, its location closer to the equator gives them more consistent days year round. They wouldn’t be gaining, or losing, many daylight hours by observing the clock change.

There have been several small changes to the Uniform Time Act over the years, most notably in 2007 when the dates were changed to extend DST from the second Sunday in March to the first Sunday in November.  Which is why, getting back to my opening line, you may be feeling a bit more chipper this morning, having gained back the hour you lost last Spring.  As for those of us who have stayed on Standard Time, we now have to go adjust our atomic clocks (that automatically assume we live in a DST zone), the clock in the car, and the cell phone.  Seems not every technology has kept up with the times – or the zones.

3 comments on “WE DON’T NEED NO STINKIN’ DAYLIGHT SAVINGS”