A friend commented the other day that in the 20 years she’s known me I’ve been in a constant state of remodeling my house.  That’s not really true, but it’s not far off.  Hey, tastes change.  Plus, in my defense, when we moved here 22 years ago interior design trends were different.  I recall our first designer promising us that she would never inflict howling coyotes or cactus motifs on us, but we did end up with another popular trend at the time – darker finishes.  So over the ensuing years we’ve undertaken five remodeling projects.  I’ve changed the kitchen, modernized the office, torn down fireplaces, put in new windows and doors and updated the master bath and laundry room.  I don’t think that’s so much over a 20 year period but then again I may be in a state of denial.  Or the paint fumes I’m smelling right now have made me a bit delusional. In any event, this latest project I’m chalking up to Corona virus. 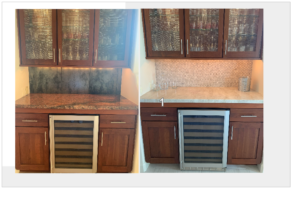 I had no choice, right?

We’ve spent a lot of time in the house since March.  A lot.  The one thing I’ve never changed over the years is our flooring.  I hated it but I have heard such horror stories about removing tile that I never had the nerve to rip it all out.  I became increasingly irritated with it over the summer.  Okay, it was probably the virus and all the other crap we’ve been through that had me in a bad mood, but the floor took the brunt of my angst.  Finally I decided that I might not be able to do anything about a virus but I sure as hell could change some tile.  As it turns out, it was amazingly easy; the relatively new “dustless” tile removal is a miracle.  In 24 hours they had removed 1650 square feet of tile and cleaned it up.  It is unbelievably quiet and while it’s not completely dustless, it’s darn close.  I spent about 500 hours on Houzz looking for ideas and finally chose new tile much lighter than our old one.  Unfortunately (but not really) it became obvious that we would need to change the backsplashes in the kitchen and bar to blend better with the floor.  The problem was the countertop on the bar was dark so in order to change the backsplash we really needed to change the countertop.  You can see my point in the photo.  It HAD to be replaced.  I sought out just the right slab that would blend with our current kitchen granite.  The kitchen countertops in the showroom were stunning so I floated the idea of getting all new granite for the kitchen.  That idea was met with a stony stare, no pun intended.

Out with the old… 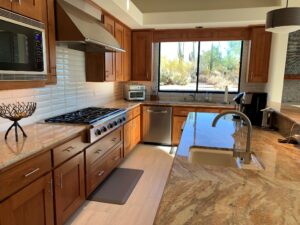 …and in with the new

Our project started on September 7th, with the slab company dropping our piece of quartzite and shattering it.  Not an auspicious beginning.  I hadn’t planned on being stressed out on the very first day.  I began to question doing a remodel at a time when my husband and I were spending an inordinate amount of time together.  But luckily the company was able to fabricate a new piece in a couple of days and from then on it was smooth sailing.  Every person working on our project was great to deal with and worked efficiently.  I loved the floor when it went into the great room but once it was laid in the living and dining rooms it looked terrible against the carpet.  My eye doctor told me I have an extraordinary ability to see color but I may be seeking another opinion.  My “eye for color” was a bit dodgy in this case.  I woke up at 2:30 one morning, distressed that I had made such an error.  Later that morning, my husband gave me a big hug and said if new carpeting would make me happy then I should order it.  And THAT is why we’ve been married 37 years.  The carpeting goes in next week. 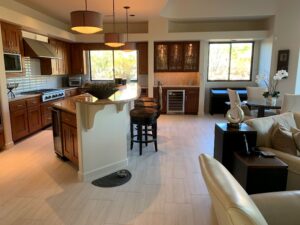 I have found it amazing what change and light can do for one’s attitude.  Change is a very good thing.  Some people change their hair color, and here in Scottsdale, lots of people change their faces, but the fact is a change of any sort helps us view the world a bit differently.  Adding lighter tones to our rooms has made my world a bit brighter, which in turn, has made me a bit less crabby.  I admit I’m a bit of a remodel junkie and not everyone likes to change things up as often as I do, but I swear that just changing out the bathroom towels can elevate your mood.  I highly recommend it.  Of course, I won’t be buying any new towels for a while – I’ve been put in remodel jail.  Oh well, at least it’s pretty in here.

11 comments on “LET THERE BE LIGHT”