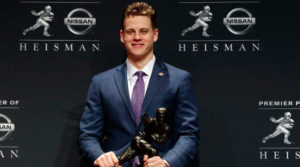 If you’re like 30 million other Americans, you will be watching the College Football Championship game tonight between LSU and Clemson.  It is slated to be one of the most exciting playoff games in recent history – both teams are undefeated and have stand out quarterbacks.  Hopefully it will live up to the expectations.  But aside from the thrill of who will win the Championship, many people have found a different reason to take interest in the game – LSU’s quarterback, Joe Burrow.  In this age of bad-boy athletes where the headlines shout of domestic violence, gun shots, and cheating scandals, Joe Burrow is the soothing balm that reminds us of just how good college sports can be.  This one person, in one night, brought dignity, kindness and generosity to the forefront.  His story bears telling and re-telling.

Joe Burrow hails from one of the most impoverished areas in the United States – southeast Ohio.  His hometown is Athens, a part of Appalachia that has yet to see significant benefit from the soaring stock market and lower unemployment rate.  Joe is a product of the local high school and was heavily recruited upon graduation.  He attended Ohio State, where he red-shirted, obtained his BA in Family Resource Management, and then with two years eligibility remaining, decided to transfer to a school where he could get more playing time.  In May 2018 he signed on with LSU and their charismatic coach, Ed Orgeron.  The rest is history. 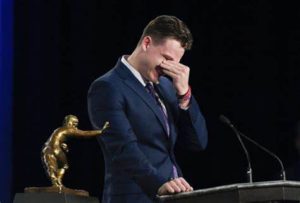 Fast forward to December 14, 2019.  Burrow was one of four finalists for the Heisman Trophy and, in a surprise to no one, he not only took home the trophy but did so by a wider margin than any winner in history, securing 93.8 percent of the possible points.   That alone would make him stand out in anyone’s book.  But it’s what he did next that swayed hearts and minds.  In his acceptance speech he not only thanked the usual people – his teammates, parents and coaches (including those from Ohio State), he took the opportunity of being on the big stage to remember those who have not been as fortunate as he.  Mid-way through his speech he said the following: “Coming from southeast Ohio, it’s a very impoverished area. The poverty rate is almost two times the national average. There’s so many people there that don’t have a lot. I’m up here for all those kids in Athens and Athens County that go home—not a lot of food on the table, hungry after school. You guys can be up here too.” He was crying, and I’m guessing anyone watching cried right along with him. It was a thoughtful moment – surely one to make everyone who ever had anything to do with this young man feel proud.  His dad commented the next morning that he received over 500 texts and the overwhelming majority of them congratulated him on Joe’s thoughtfulness, not the piece of hardware he’d won.  But it’s what happened next that highlights the positive impact just one high-profile athlete can have.

The following morning, Sunday, December 15th, Athens High and Ohio grad, Will Drabold, was so moved by Joe’s speech that he decided to set up a fundraiser on Facebook for the all-volunteer Athens County Food Pantry with a goal of $1,000.  By the end of that first day he had collected more than $50,000.  Major media outlets picked up on the story and by Monday morning, the total donations surged to $80,000, which happens to be the annual budget the Food Pantry.  By Tuesday, December 17th, the fund had collected more than $350,000.  Drabold raised the goal to $500,000 – why not shoot for the stars?

On Wednesday, at a local middle school, a teacher played Burrow’s Heisman speech for her students. When they finished watching the speech, she said she saw “a lot of bug eyes, like, Wow, he’s talking about us.” They sat down to write letters to Burrow. One of the boys in the class turned this in:
Dear Joe Burrow,
Thank you for showing me and other children that no matter where you’re from or your life story, if you work hard you can achieve greatness. Also, thank you for giving back to your community. You have inspired me to not be embarrassed by my life story and work hard to achieve my goals. Again, thank you very much.
The student signed his name, and under it wrote: “Just a kid from Southeast Ohio.”

On Friday, December 20th, donations to the food bank were close to $450,000.  Joe Burrow, meanwhile, accepted another token of his hard work and dedication that day – his Masters Degree in Liberal Arts from LSU.    By Sunday the total for the Food Bank topped out at more than $475,00. Karin Bright, president of the food bank’s board, was asked about the affect of the fundraising on the organization – “I truly hope this opens a conversation across the country and we finally address the issues of hunger and food insecurity in this country. We’re better than this. People in this great country should not be going to bed hungry. And for Joe Burrow to put such a personal face on it—his classmates at Athens, he knew, were going hungry. And he remembered that at this momentous time in his life.”  She said the funds that have been raised are a sacred trust, and will ensure that it is allocated with utmost respect for those who gave it. 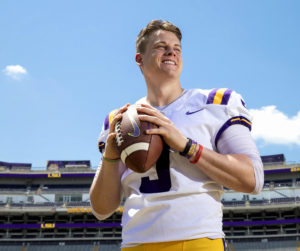 As of this morning, game day, the total donations are $503,211.  I don’t know who will win the game tonight, but I do know that Joe Burrow has already made more of an impact off the field than on it.  Yes, thousands of people in Athens County will be less hungry this year, but really, all of us have been given a gift from this upstanding young man.  He has lifted our spirits, caused us to remember that the American people are generous and kind.  He provided a shining example of what college athletes can be.  Joe Burrow is not just a kid from southeast Ohio – he is an inspiration to us all.

So for tonight’s game I say, Geaux, Joe!

Headlines:  A nod from Tiger could be next.

And hope that his endorsement will put him over the hump.

Herman Cain’s endorsing Newt, but if we could be so rash,

That will make the women’s vote most likely burn and crash.

Money:  No use crying over spilt Euros.

The Italian finance minister broke down and cried today,

As she announced that many social perks were going to go away.

She said that working people had no more money to bestow,

A sentiment we hope foreshadows how the U.S. is going to go.

Sports:  This bowl proud to be sponsored by Sani-Flush.

Well, LSU and Alabama will play the title game re-match,

While other games seem destined for a considerable mismatch.

You know there are too many bowls when the committees find a reason,

To select a team to play that has had a losing season.

Life:  Oh, what we wouldn’t give for a blanket and a piano.

The onslaught has begun, Christmas shows are all the rage,

Entertainers from Cyrus to Buble are taking to the stage.

Barbara Walters, Grinch and Rudolph will also appear on the TV,

But nothing beats the vision of Charlie Brown’s Christmas tree.

A redposey is never out of season.

Visit www.redposey.com to order one now.

Headlines: I Feel Strongly Both Ways

Romney’s getting bashed for the changing of his stances;

Is he trying to get ready for some presidential dances?

Some who know him best, have heard that he has said,

“When Obama leaves I hope he leaves his flip flops by the bed.”

Just as we get the Greeks turned around, so to speak,

It seems that the Euro has sprung another leak.

This time it’s the Italians, their future’s not so sunny;

They gotta dough, they gotta bread, but they ain’t gotta no money.

Last week we were hyping the Tigers and the Tide,

But LSU and Alabama took us for a ride.

The game had not one touchdown, no great runs, no great passes

Disappointing all the couch potatoes sitting on their asses

Life: He Thought He Was Dr. Kevorkian

The jury’s has come back with manslaughter, involuntary

And Dr. Murray’s comments that followed seemed quite scary

“What was it, drips or shots or was it probing with my scanner?

Or was it just you didn’t seem to like my bedside manner?”

Need a verse?  Find us at

Headlines: No One Wants A Greek In A Position . . . To Fail

In Athens the economy is struggling

As alignment with the Euro they seek.

The rest of Europe’s not happy with the problem,

But no one dares turn their back to a Greek.

Money: Lots of Money That No One Can Qualify For

We have lowered mortgage rates to a scant four percent,

When most buyers are still out of work.

Is this Saturday in old Tuscaloosa;

The Tigers and Tide

Neither wants to come away as the loser.

Life: I Can See Bill and His Cigarette Holder Now

Has announced that he’s going to star

In a role that seems quite a stretch for the clown;

He’ll be playing the great FDR.