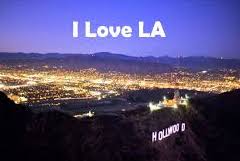 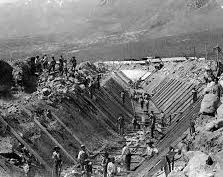 After a few years of living in southern California I guess I became ambivalent towards L.A., I didn’t hate it, but I also didn’t spend too much time there, since getting to and from the ‘City of Angels’ is usually a nightmare. But I’ve visited and enjoyed a good number of L.A. area sites, some recorded here in the blog, like Venice Beach, Watts, Rodeo Drive, Chinatown, Old Italy, Griffith Park and Malibu to name a few. But I just finished reading a book about how L.A. came to be, it’s entitled, The Mirage Factory, by Gary Krist and I was fascinated by the story of how L.A. was invented; yes, that’s the word he uses for the origin of Los Angeles.

From around 1900 to 1930, Los Angeles went from a dusty hinterland town surrounded by deserts and mountains to a burgeoning city of 1.2 million on the shoulders of three ambitious and restless outsiders – civil engineer William Mulholland, filmmaker D.W. Griffith and evangelist Aimee Semple McPherson. 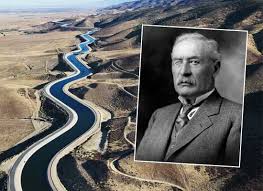 You’re only recollection of Mulholland may be of Mulholland Drive, a famous road carved through the Santa Monica mountains, where early teenage Angelino boys took their girlfriends to park and ‘watch the submarine races’. It is now the road on which some of the most expensive homes in the U.S. are built, as it affords a magnificent view of the Los Angeles Basin, the San Fernando Valley and the Hollywood sign. Los Angeles would just not be, were it not for Mulholland, who understood that there was no way L.A. could grow significantly, because it was essentially in a desert with no potable water supply. Mulholland solved that problem by heading up the building of a 233-mile aqueduct that brought water from the Owens Valley, which stretches from Lone Pine to Bishop on the Eastern side of the Sierra Nevada mountains, to Los Angeles. The building of the aqueduct was not without its share of contentiousness between the builders and the Owens valley residents, who saw their water being redirected to the south. Shootings and lynchings were not unusual. 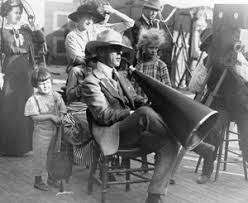 I’m not necessarily a big fan of Hollywood, but I found the story of how L.A. became the movie-making capital of the world fascinating. You may think of Cecil B. DeMille as the premier movie pioneer, but D.W. Griffith was his mentor. Griffith’s story of transplanting the movie industry from New York to Hollywood recalls lots of names you might be familiar with like Fatty Arbuckle, Mack Sennett, Mary Pickford and Charlie Chaplin, all silent movie stars. 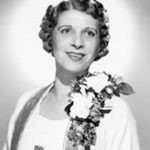 I was at least vaguely familiar with the previous two men’s name, but I’d never heard of Aimee Semple McPherson, but she was one heck of a evangelist, literally bringing thousands of people to her sermons every week. She was a determined juggernaut who dealt with much controversy in her teachings, sermons, healings and even a kidnapping, or was it fake? Using radio for the first time, she almost singlehandedly brought religion to this bustling and growing metropolis that would soon take its place as a world class city.

So, while I don’t love L.A., I now have a greater respect for how the city was built, or invented; and how it has become one of the most diverse and interesting cities in the world.