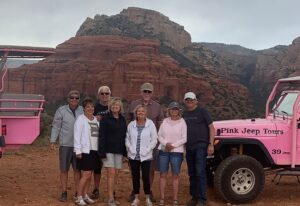 No more tomes about the size and shape of the earth or the volatility of cryptocurrency, OK, at least not for a couple of weeks.  I’m happy to report that we recently left the house in the company of three other neighborhood couples, the Johnsons, the Pacellis and the Nelsons on a road trip to visit that big, huge, OK, it’s a grand canyon in Arizona; hitting a few memorable and not-so-memorable spots along the way.

With an early morning departure and a gourmet breakfast at the ‘Golden Arches’ we headed east and found on the map an off-the-beaten-path place in the Arizona desert to have lunch, the Kirkland Steakhouse & Bar.  It was indeed off-the-beaten-track, but sometimes those are the most interesting places.  Not this time!  We walked into this former ‘house of ill repute’ and found a couple of guys at the bar having a beer and no one behind the bar.  We found a table and sat down; still no one came, except a Camero car club of about 15 people, who poured through the front door.  They immediately went up to the bar and out from the back of the bar came Ma & Pa Kettle, an elderly couple, who were the owners of the place.  We could see that it might be some time before our order was taken much less our food served, so we asked a member of the car club if the wait was worth it.  A young lady turned to us and said, “I have four words for you, DO NOT EAT HERE!”

So, with stomachs growling, it was off to Prescott (it’s PRESS-kit, don’t call me Pres-COTT) for lunch.  Prescott was once the 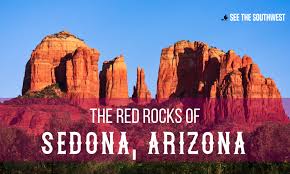 capital of the Arizona Territory, until people kept mispronouncing its name, so they moved it to a place people couldn’t spell – Feenicks.  The Prescott town square was busier that Disneyland on the 4th of July – people were clearly tired of their house arrest and were breaking out!  This was a trend that we would encounter throughout our trip.

Worth a stop on your way from Prescott to Sedona is the ‘ghost town’ of Jerome, where in the 1890 they were mining for copper and found gold.  At its height there was a population of between 10,000 and 15,000, today around 400-500, but there’s making up for it with the number of tourists roaming the streets.  We strolled the main street (there’s only one) and found plenty of tee shirts and coffee mugs for sale – another trend we found repeated throughout the trip. 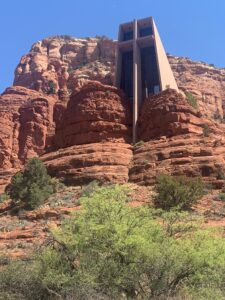 Chapel of the Holy Cross

After a good night’s rest in Sedona, the day was spent exploring the many facets of this mystic town.  They’ve made seeing the beauty of Sedona easy – you can hike, bike, car, Jeep, train or helicopter to visit the ‘red rocks’, that’s aside from walking the main street and finding lots of coffee mugs and tee shirts.  We opted for a hike with great views of the ‘Bell Rock’, the ‘Courthouse’ and ‘Snoopy’ – red rock formations resembling those items.  We then took a kidney-jarring Pink Jeep ride to some other red rocks –I wouldn’t recommend our particular tour, although I did find out later that we’d scheduled the ‘senior citizen’ tour, so it was a little less adventurous than most.

One of the highlights of the day was a visit to the Chapel of the Holy Cross, which is carved out of a mountain and features a 90 foot iron cross and a spectacular view of the entire valley.  I lit two candles in the chapel, one was in memory of our recently passed good friend and neighbor, Patrick Michael and the second as a thank you for continued good health of all cancer survivors.

Next: Part 2 – on Thursday.  The Mystic Side of Sedona and on to the Canyon