(Unfortunately these are the kind of stories you get when one is recovering from back surgery.  I’ll be back in action shortly!) 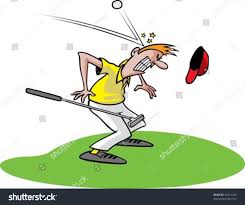 I most often hear the word “Duck!” when it’s yelled by the rest of my foresome after I hit a golf ball. But when I heard it from my neighbor it was even more scary. He called me when I was in Death Valley this past spring to tell me that a mother duck had just hatched eight little ducklings in my backyard. What?!!! How did they get there? How did you find them? Who can I call? Once I settled down, he said that since he had a mother duck give birth in his backyard a couple of years ago, that he’d be happy to take them off my hands since he was up to speed on the care and feeding of ducklings. Hell yes! I’m thinking, but I said something like, are you sure you want to do that? He said he had experience and was happy to do it. Thank you, thank you, thank you.  I gleefully accepted his offer.  So, in a effort that he described as akin to ‘herding cats’, he got eight baby ducklings as well as the mother to walk around the fence that separates our yards and created a home for them in his yard and pool instead of mine. 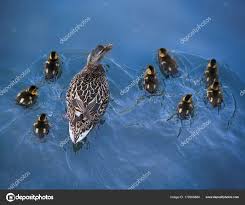 Once home and thankful that the ducks were no longer on my property, I found that my second-story home office window, which overlooks my neighbors yard and pool, offered me a bird’s eye view of the daily development of ‘our’ ducklings. First, I must say the mother duck was most attentive to her brood, keeping a constant eye on them and protecting them from birds of prey (mostly hawks) who were looking for a duck dinner. The ducklings obviously showed that they could immediately walk (something we humans take up to a year or so to do) and very quickly they were in the neighbor’s pool and the mother was teaching them how to swim. I think one of the lessons she taught them was to make sure that they looked like they were expending no energy at all, but beneath the water’s surface, they’re moving their little webbed feet as fast as they could. “Don’t look like you’re working hard kids”, I could hear her saying. . . or quacking. Swimming came very naturally to these guys – actually I couldn’t tell the guys from the girls, as at this age they all looked the same. It’s only later that the males start looking a little more colorful – in an effort to attract females. 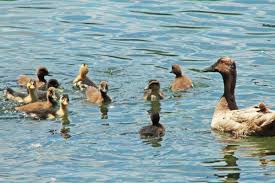 “Kids, make sure you look like you’re not expending any energy”

Day by day, week by week the ducklings grew and the neighbor’s pool grew also, from blue to brownish green. Duck poop will do that! Our neighbor had Googled how long it would take before the ducks would leave – about 51 days. Under the mother’s tutelage, the ducklings would parade around the pool, jump in and swim a few laps, eat something then take a nap. The ducks were strutting proudly as if to say, “Hey, I can now walk pretty good, ok it’s a waddle, but I can swim really good, but how are we going to get out of this place?” Be patient by little duckling, I could hear the mother preaching.  Apparently a mother duck and her brood have some attraction to the opposite sex as both my neighbor and I spent much of our time scaring male suitors out of our pools.

Soon the ducklings started flapping their wings while they skimmed over the pool’s surface, never quite getting out of the water. Then one day, about 51 days into their life on earth, as I was looking out of my office window, I saw one of the ducklings, who was now as big as his mother, frantically flapping its wings, skimming across the pool and like a prop airplane rumbling down the runway gaining speed as the propellers spun frantically and then suddenly he become airborne. I could almost hear the duck say, “Damn, I can walk, I can swim and now I can frickin’ fly!” 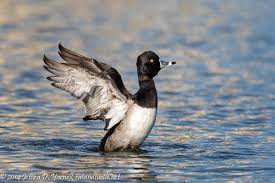 Soon all the ducklings and mother, had flown off and with a whole lot of chlorine, the neighbor’s pool returned to normal. While I was most happy that the neighbor took on the task of providing a first home for this brood, I must say I was impressed mostly with the mom, who never left the ducklings alone (our neighbor provided duck food and water for the entire family during their stay – more than the bed and breakfast they would have received at my place) and found it rather interesting to watch the progress of walking, swimming, diving and then flying. Unfortunately, next spring will undoubtedly bring some of the brood back to their old nesting place and will go through the same process with their own family. Ducks Unlimited!

I just hope my neighbor is still willing to take my ducks if they decide to nest here again. I’ll be happy to watch them develop in his yard from my office window.